The first time we campervanned around the Coromandel we exclusively hugged the coastline visiting as many picturesque and geothermal beaches as we could cram into a long holiday weekend. Our move north to the Bay of Plenty brought easy access to this peninsula, providing us a chance to slow down and experience the interior mountain ranges.  The Hauraki Fault runs down the west side to the Coromandel creating the Firth of Thames basin to the west and the mountains to the east. These rugged peaks, are narrow rising steeply from the coast so one is never too far from the beaches that the peninsula is known for.

The Pinnacles Walk in the Kauaeranga Valley is a stunning hike  that follows the original steps constructed for packhorses carrying supplies for kauri loggers, gum diggers, and gold miners.  The hike climbs the craggy Pinnacles through groves of nikau palms and rata trees, reaching the summit with 360 degree views exposing both coasts of the peninsula.  This hike is a geology and bird lovers dream.

A foot scrub station with disinfectant is at the start of the track to help prevent the spread of kauri dieback, a pathogen that senses the kauri tree’s roots, eventually killing the trees.  The disease is threatening heaps of these giants throughout the northern reaches of the country, but has yet to spread to the Coromandel. 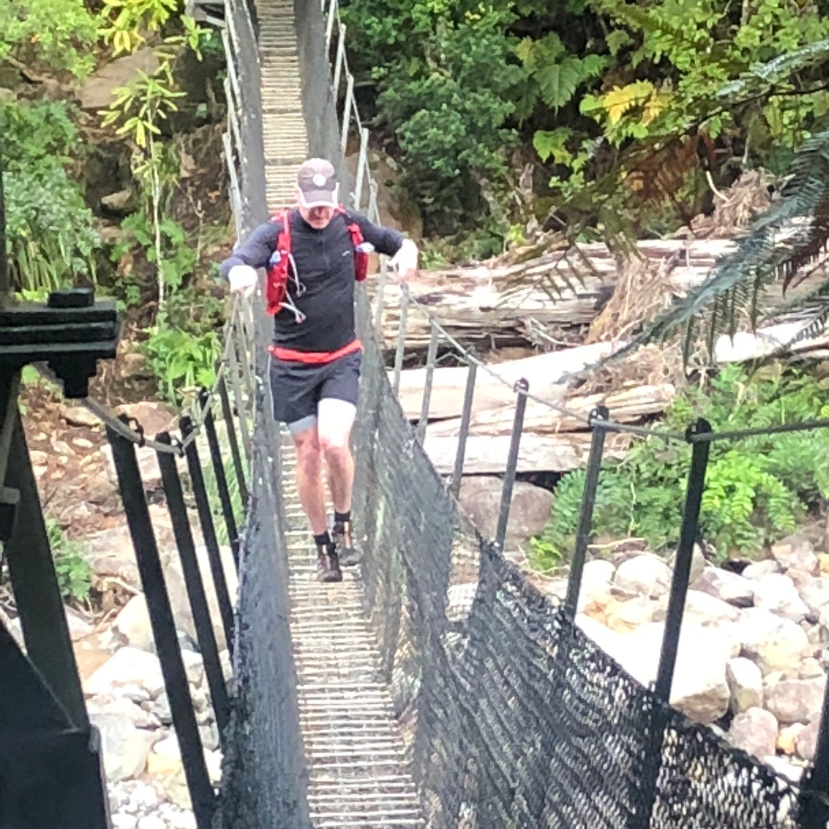 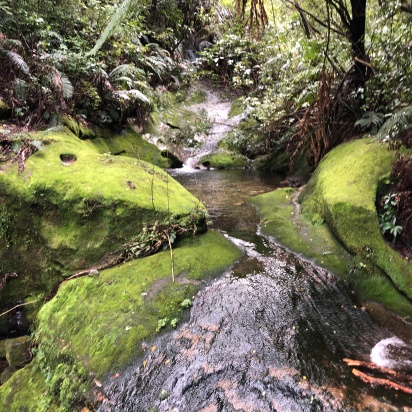 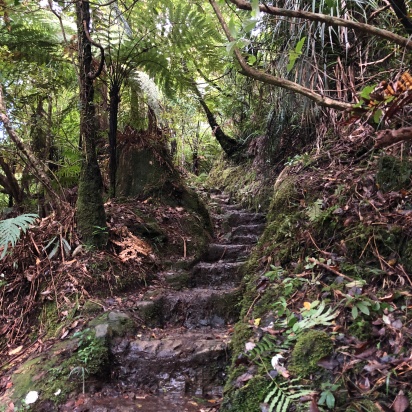 Quickly gaining elevation, the trail exposes views of the valley and when you reach the 70 bunk Pinnacles Hut the stair route to the summit is in plain sight. 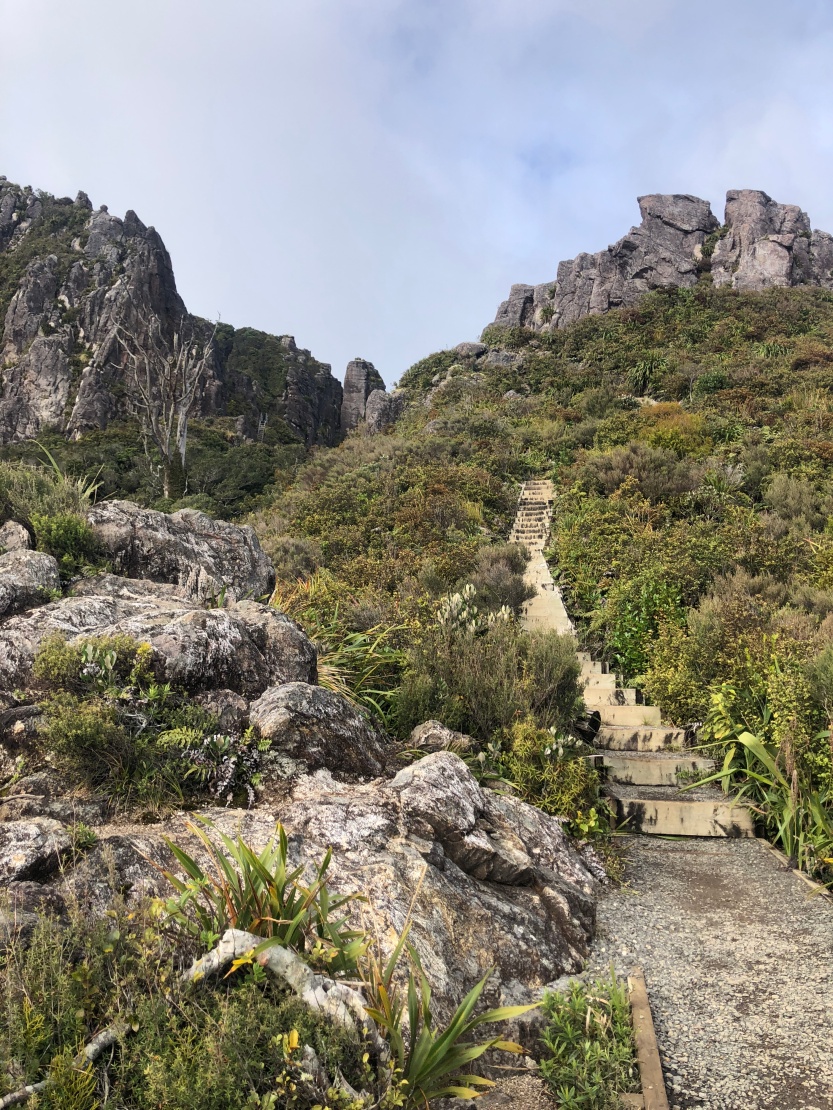 The rock spires draped in vegetation rise dramatically as the path narrows and stairs are replaced with ladders. 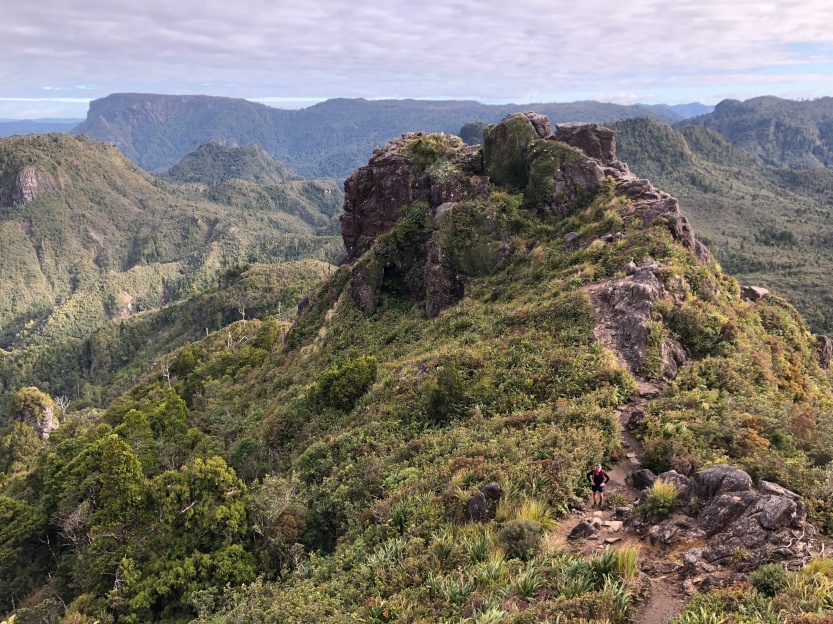 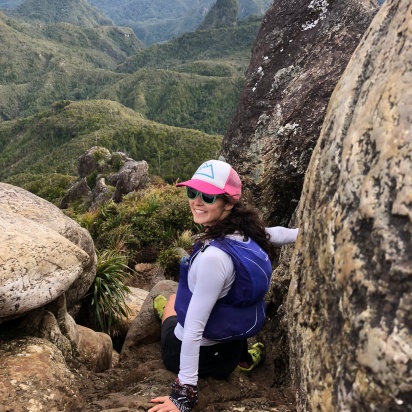 On the return, take the slightly longer path to Billy Goat Falls.  I have seen pictures of this stunning route, but it was closed due to slips during our hike here.

I have wanted to stay in the Top Hut in the far north of the peninsula for years.  The hut is perched in the bush just south of Waikawau on the east coast and explodes with charm and bird song. 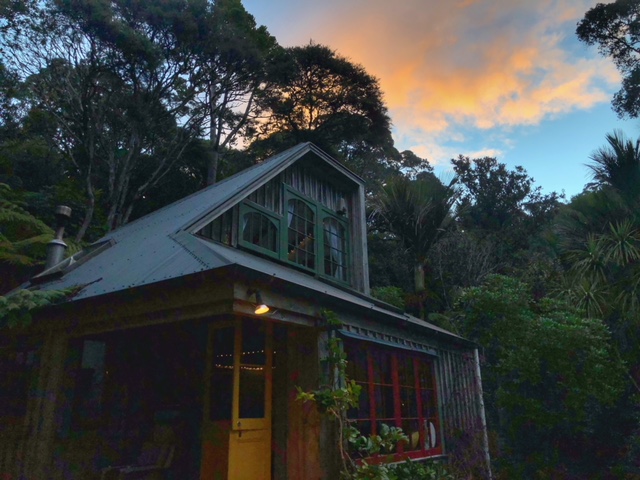 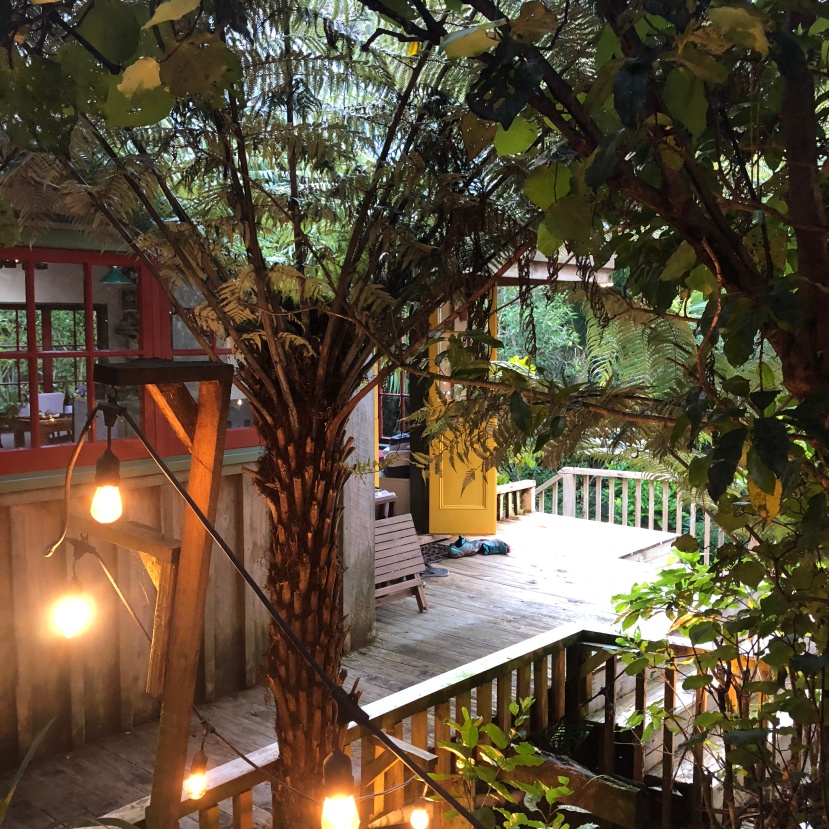 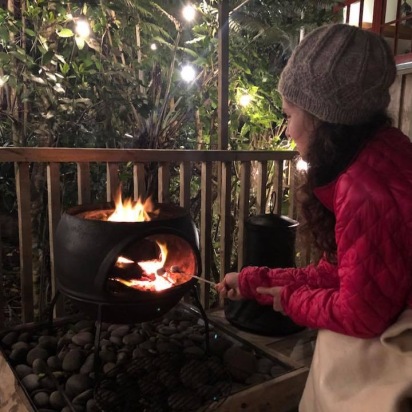 The hut is surrounded by nikau palms, kauri, tawa, and rare birds such as the kaka and kiwi. With large windows, wall-less rooms, and an expansive deck, we were deeply  immersed in the Coromandel bush here.

A small network of paths from the hut lead up to a tiny sun deck overlooking the coast and down to a beach with rock croppings and promontories. Hardly a dwelling in sight.

The owner of the hut directed us to beautiful bush tracks that only locals know where we enjoyed endless running to breathtaking view after breathtaking view, alone in the bush with only the sound of footsteps and the birds.

Sand beaches are just north at Waikawau and the small community around Little Bay. Locals here are happy to share their fishing knowledge and passion for open water swims, but the hanging library in the pōhutukawa was the highlight.

We have run/hiked/beach relaxed half of this walkway in the past, approaching from the west and turning back, retracing our steps from the highest point at Cape Colville.  During our time at the Top Hut, we made the trip north to run the eastern shores to the same cape, starting at the stunning Stoney Bay.  There is a DoC campground here, with several sites which I am sure are popular in the summer.  On September 1 (the first day of spring) we were the only two people venturing up this far.

The track from this direction climbs through dense bush and is much more runable than approaching from the west.  There are less views and less landscape variety from Stony Bay , but also less grazed land (my dream).  On a day where I needed some extra time on my feet as I trained for a race, it was a dream.

The 180 degree view from Stony Bay to Fletcher Bay overlooking the Pacific Ocean is spectacular. 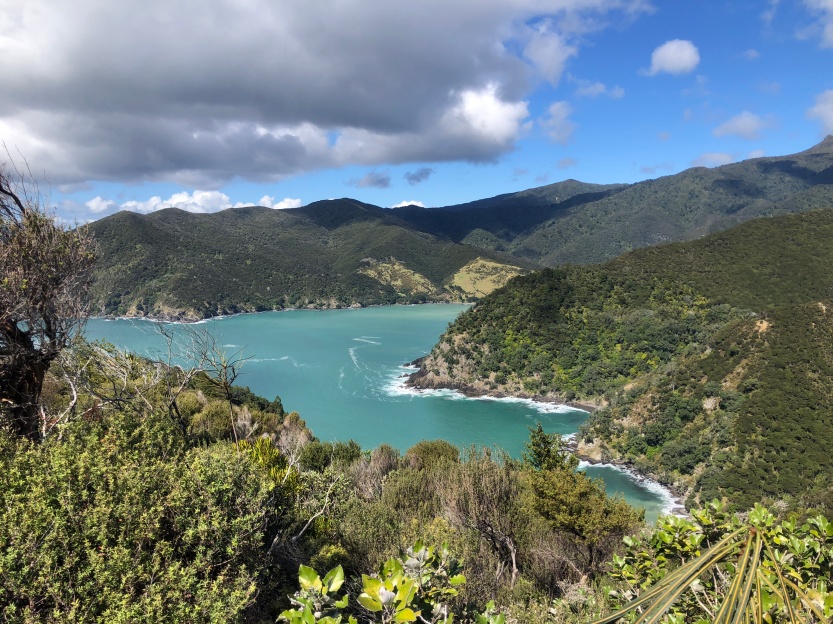 Most of the big kauri trees are found in the far north, but those throughout the Coromandel are arguably just as impressive.  Route 309 is one of the best place to access these trees in a non threatening way.  You can also visit the popular Waiau Falls here as well. The kauri giants live up to 2,000 years, growing over 50 metres in height and 16 metres in width.  They dominated the far north landscape until the arrival European settlers who felled the trees for masts, buildings, and furniture.  Gum from the trees was harvested for resin products.

Midway along Route 309 you will find a collection of kauri, with highlights being the siamese kauri and the largest yet huggable giant (name escapes me).

Not one for repeat trips, the beaches of the Coromandel are an exception.  I love revisiting all of my favorites to see them at a different time of year, different light, different weather, with different people.

This remote beach, hikeable at only low tide, is just north of Whangapoua.  We recently took the van up here and stayed at the only camping area nearby, Earl’s Paradise.  Earl is a gem of a person.  His family reclaimed their land from the State that relentlessly tried to hold and control it for Pākehā farmers.  Earl and his family live on several lots overlooking the bay, inviting a few lucking campers to experience their land.  We spent candlelit evenings chatting with Earl, picking grapefruits and oranges and running errands between beach stops with him by day.  We imagined our campervan life being one of remote beaches and bush and many of our weekends are spent this way.  However places and people like Earl are by far the most special.  His three dogs. Stella, Hades, and Monster were our loyal companions throughout our stay.

…and the dramatic overlooks and white sands of New Chums Beach 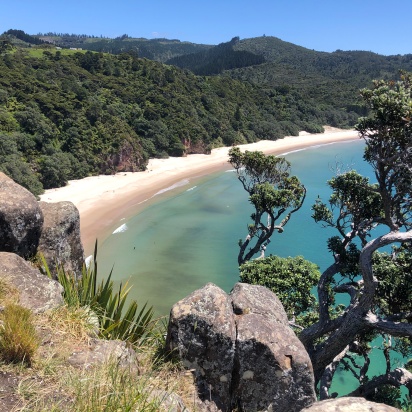 The first time we visited this beach, we traveled by kayak.  It was a great way to explore the rocks, while spending time on land and sea.  This trip we walked the track, which is usually packed with tourists as the day progresses. Despite the crowds, you can still find quiet places to tuck away for a little solitude as many people only stay long enough to snap their photo under the famous arch. 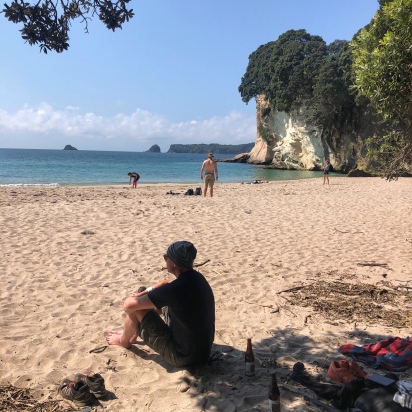 While my preference of travel here is by kayak, the by foot option leads you to the real highlight, Stingray Bay.  These beauties gracefully glide through the clear turquoise waters, burying in the sand between play.  Few tourists venture on this short detour, so you are likely to be the only people among the stingrays.

Grab your shovel and head to this Kiwi favorite, the iconic Hot Water Beach.  This patch of bubbling thermal water can be reached with a bit of effort two hours each side of low tide.  People pack in tightly, digging a maize of hot water pools to relax in for an hour or two.  It is great fun meeting neighbors and chuckling as people scream at the shock of random too hot water burst. 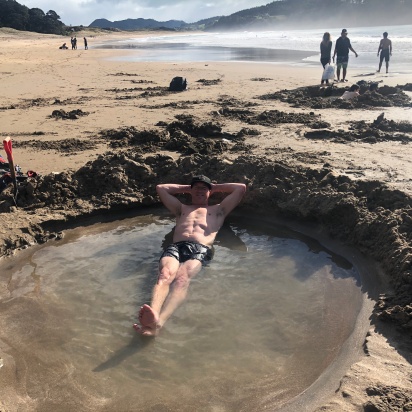 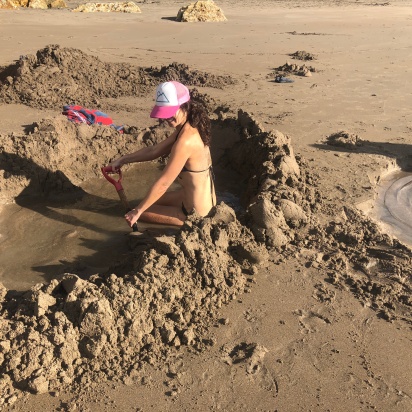 We were greeted by beautiful rainbow this trip. 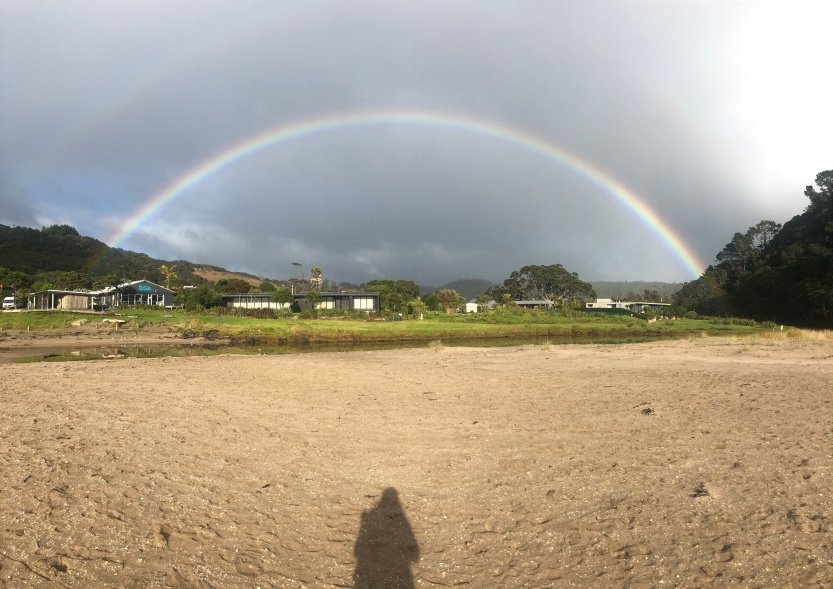 Great spots for a free overnight stays on the way up peninsula can be found in Thames and Onemana.

The road up the west coast of the Coromandel near Thames has endless coastal sites to choose from.  Enjoy an evening harvesting a shellfish dinner while watching the large population of wetland/seabirds as the sun sets over Firth of Thames. 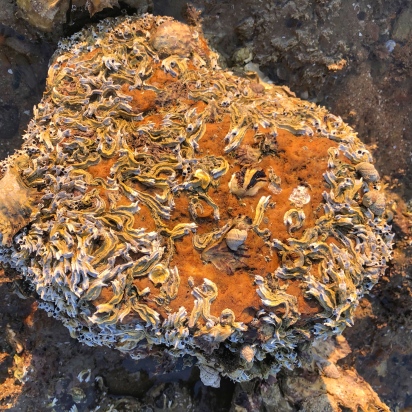 There are several little villages consisting of mainly holiday baches just north of the ever popular Whangamata beach.  Onemana is one of our favorites. With only 4 free sites, an early arrival is necessary to score a spot.  Watch the sunrise from the comfort of your van here. 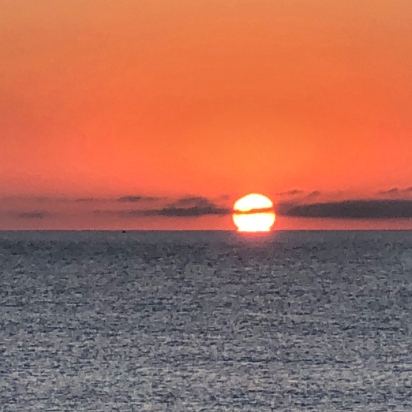 The tiny village of Kuanotunu midway up the east coast offers some great free campsites and access to some quieter Coromandel beaches. Explore the rock life leaving their art, harvest some scallops, dog watch, or head to Luke’s Kitchen and Cafe for a handle of NZ beer and green lipped mussels. 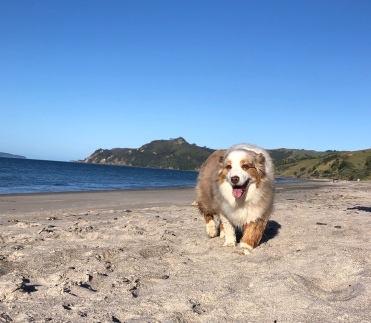