I have always been intrigued with Tasmania. It seemed like some unreachable place of remoteness. Any place where prisoners were sent left me with that impression.  Now that I live in NZ, it was finally reachable. Tasmania required less than five hours of flying, which by NZ standards is a pretty quick flight. So when I was looking for a more simple trip to ring in the big 40, Tasmania fit the bill. It was far enough away to feel like I was ‘getting away’, but close enough to not come with the fatigue of a long haul flight.  It had a diversity of landscapes to explore and a food and art culture that could afford me some slower kick back days.

We spent 9 days driving around the island, touching just about every region where roads can take you.  A huge chunk of the island is completely undeveloped requiring a fly in and a considerable amount of walking.  Our journey began in Hobart and continued along the south and east coasts to include the Tasman Peninsula, Freycinet National Park, and Bay of Fires.  We then traveled inland to Cradle National Park, with a brief beer stop to the west coast region, finishing in Launceston. I suppose if you were really reaching you could claim the later to be on the north coast, but really the city is located quite a bit inland in a river valley.

It has been over a week since I was in Hobart and I still can’t come up with a fitting description of the city.  It is incomparable to any other place I have been. Its streets are filled with well maintained historic colonial architecture, art, distilleries, and amazing restaurants.  Hobart was just Hobart, it embraced its local materials and food sources and celebrated art in its own quirky way.  The city wasn’t trying to follow trends or copy other cities, it was uniquely Hobart.

We arrived in the city after a massive storm and the weather hadn’t completely settled so we thought a day at MONA (Museum of Old and New Art) was the perfect way to duck inside from the rain. First we headed to the Salamanca Market, a huge Saturday market along the waterfront where you can buy local goods and sample yummy food and drink.  Bri of course had a try a sausage…something he basically does in any new city if he spots one. 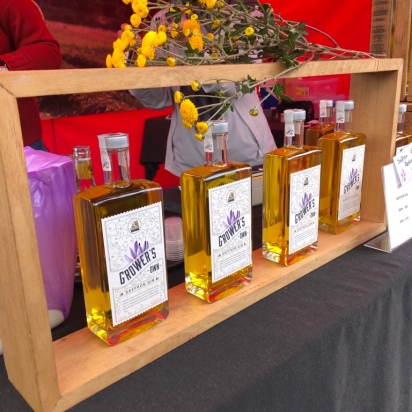 Afterwards we were off to MONA on the ferry. We sprang for the fancy journey there in the posh pit where you are served endless bubbles and snacks. Sure it was a bit overpriced, but we were only headed to the museum once so we thought we would live it up.

MONA is the largest privately funded museum and is described as “subversive adult Disneyland.”  The description was spot on as we toured provocative pieces mainly focused on sex and death. The pieces were so dynamic, shifting lights, moving water, videos, or required careful walking through an ‘experience’.  You weren’t walking around simply looking at art hanging on the walls, you were immersed in it. 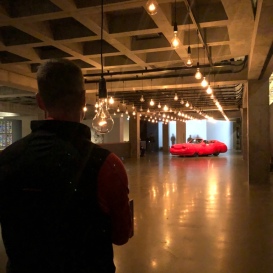 That evening we enjoyed our first 7 course meal with wine pairing at Dier Makr.  Brian and I consider ourselves, high appreciators of wine and food, but not very knowledgable. The set menu and pairing took all of thinking out of it for us and we enjoyed allowing the professionals make all of the decisions. Boy did they deliver, it was the best meal I have ever had! Below is the wine pairing with a half eaten desert.  It was so delicious that I was thankful I didn’t know how to make it.

Between meals wander through the historic streets of Battery Point and the harbor while stopping for refreshments at the city’s many distilleries.  We followed the art walk, which is basically a scavenger hunt of history using numbers to tell a story of events at various places within Battery Point.  It gets ho-hum reviews, but if you have the time and enjoy walking, it is filled with knowledge and takes you through a largely residential area that you might otherwise miss as a tourist.

If the art walk isn’t your style, the harbor has plenty of history and shows off the present day working nature of the fishing industry. 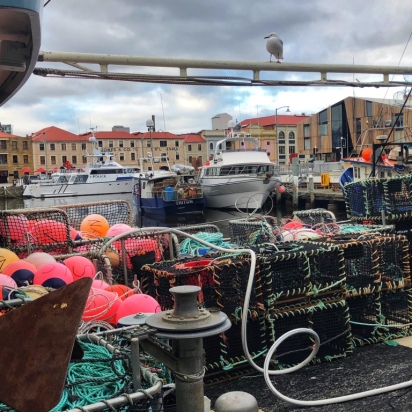 Sampling local beers in a city is always a favorite activity of ours. In our failed attempt (access was closed due to the debris from a recent storm) to hike up Mount Wellington, the towering igneous rock towering above the city, we found ourselves in the Cascade Brewery neighborhood.  Cascade Brewery is the oldest brewery in Australia, established in 1824 by a former felon. There was some great history to be learned here, but the beer was, meh.  I guess craft beer really has ruined us.

One of the newer breweries, Hobart Brewing Company, was more our style. Fitting that after raving about the their beer, we learned that the brew master was formally a brewer at Mountain Sun, our regular hangout when we lived in Colorado.

Feeling pretty boozy by this time, we tried only one whisky distillery, Lark Distillery. I know almost nothing about whisky, probably only swirling a glass a few times a year on a cold winter night. The staff were super knowledgable, we learned so much, and absolutely LOVED their whisky.  If you think that you don’t like whisky, a stop here may just change your mind. 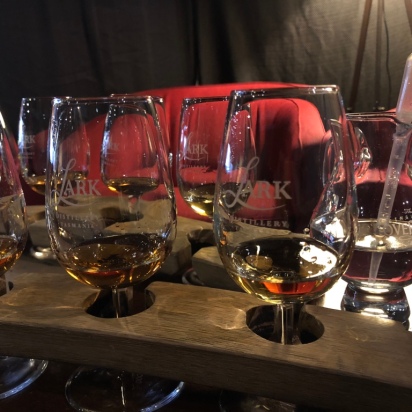 We enjoy our time in the main urban hubs of the places we travel to, but our true love is hiking in the wilderness so we headed to the southern edge of the island, the Tasman Peninsula.  There is nice little hike out to Cape Hauy that will really make you feel like you are on edge of civilization.  I can certainly understand why this area was chosen for the Port Author penitentiary.  The hike is fairly short and manageable with a well maintained track and stepped climbs. The first part of the track will wonder through native bush until nearing the coast where the towering dolerite pillars rise from the sea.  The geology is impressive as are the sounds of the sea crashing into the rock towers.  You can see clear across to Cape Raoul and if you are lucky you can spot a wallaby (or kangaroo), I haven’t seen enough to be able to spot the difference. 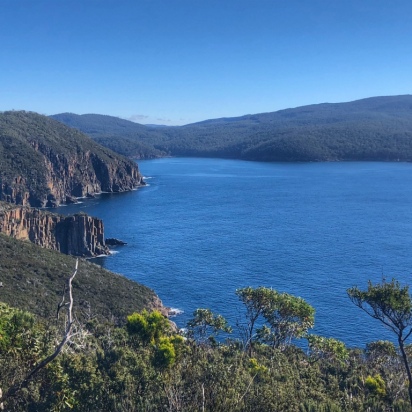 After the hike, we thought we better make sure to visit the penitentiary since it was such an important part of Australia/Tasmania’s history and development. The prison was eerily beautiful. The late afternoon light brought out the peach and yellow hues on the walls that were perfectly crumbling in a way that made the ruin filled with so much sadness and inhumanity seem like a work of art. We learned not only of the terrible way the prisoners were subjected to solitary confinement and forced to wear hoods while being silent in their cells, but also of the continued tragedy where 35 people were killed by gun violence at the site in 1996. 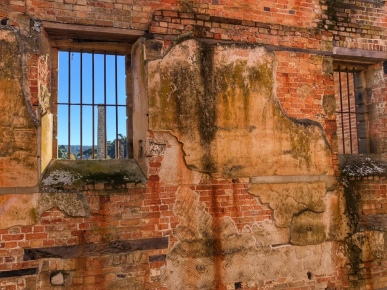 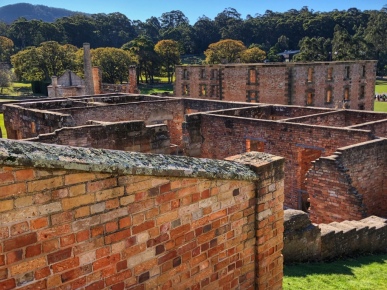 There is nothing like a stay at the Tassie Design Shack to brighten your mood after a prison visit. Frankie is a graphic designer that has been renovating her 1960s fishing shack in the best and brightest way.  This is a great place to sit back and relax, enjoying the harbor views, collection of boardgames, and woodstove.

We were off to the east coast the next morning and enjoyed a cheery rainbow goodbye.