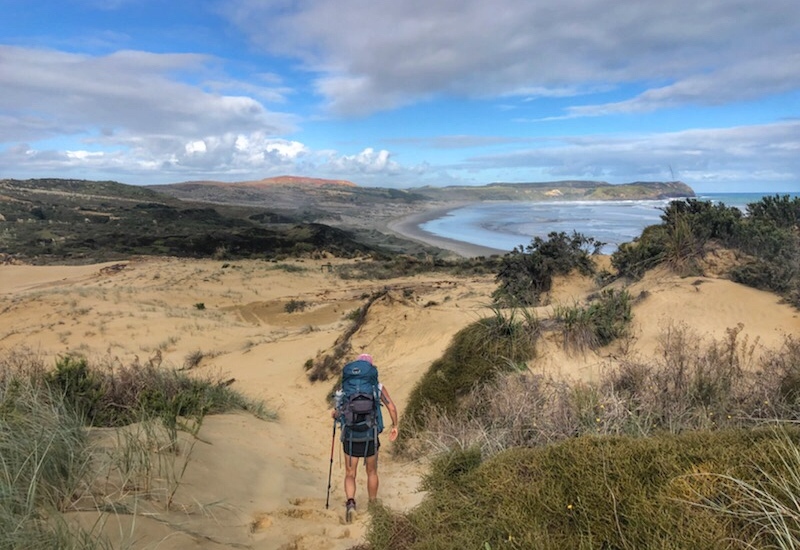 “a thing of beauty is joy forever” – John Keats

It has been a few weeks since we returned from a week in the far north and my heart is still filled with so much joy and gratitude. Te Tai Tokerau Northland is the long narrow stretch of the country terminating at Te Rerenga Wairua Cape Regina where the Pacific Ocean meets the Tasman Sea. With generally only one road in and out, no major airport, and a rural landscape, the far north is remote and considered challenging to reach. Despite often being overlooked by tourists and residents, this narrow piece of NZ with contrasting coasts is filled with natural wonders, Māori culture and stories of heritage, it is a ‘must make’ journey.

We started our trip on the Te Paki Walkway. This three day, ~50 km trek begins in Spirits Bay along the east coast and follows the west coast after reaching Te Rerenga Wairua Cape Regina, finishing in the towering dunes along the Te Paki Stream.  The track is considered, moderate/easy which we thought was mildly debatable.  The trail is well groomed with easy footing, but if you aren’t used to carrying a full pack up and down long steep slopes it could feel quite grueling.

The track at Spirits Bay has a rather mild start walking along the coastline behind a dune that exposes views of coastline often.

Shortly after crossing an expansive wetland, the track begins to fall into its typical rhythm of steep climbs and descents to small beaches. Around 9 km into the hike, we reached the first camp, Pandora.  The lovely beach, flanked with pōhutukawa trees clinging to rocky cliffs, is an excellent place to stop for a bite to eat and a quick cool off dip in the ocean. 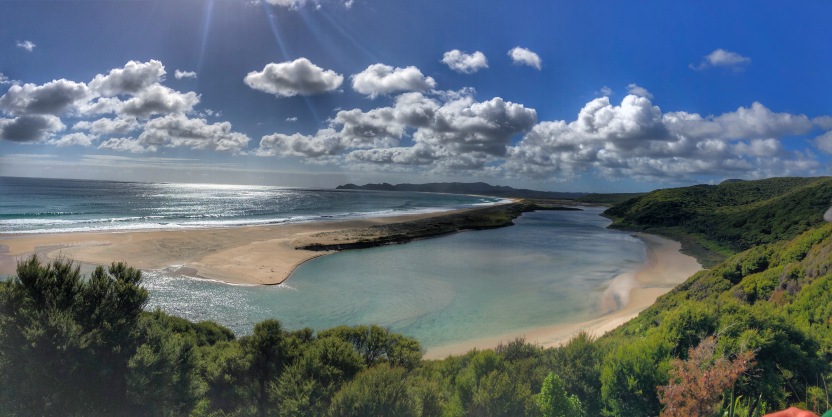 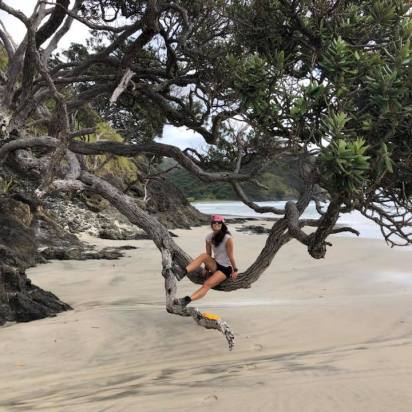 Continuing from the camp, a big climb ensues; reaching exposed red rocks and breathtaking views across a landscape so narrow one can see both the east and west coasts at the same time. Further inland and sans the coastal breezes, this section is hot and muggy and we were beginning to look forward to reaching the campsite so we could ditch our heavy packs and relax.

As we found the coast once again, views of the Tapotupotu campsite were in the distance.  The approach to this site is one of my favorites of the hike. From the bluff above, views of the winding tidal stream buffered by wetlands leading to the bay are exposed. It is just a mile descent from the location shown below.

The Tapotupotu campsite would be the first time we had seen humans since we were dropped off at Spirits Bay. The campsite can be reached by car, so campervans stream in filling a small parking area before sunset. There is a separate section for tents, which doesn’t seem to be the preferred sleeping method here as we had the area to ourselves.  Certainly can’t complain about this view! 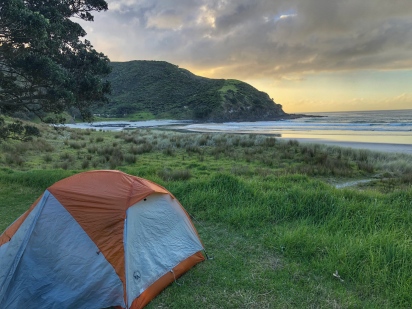 Despite it’s east coast location, the sunset here was far more showy than the next morning’s sunrise. 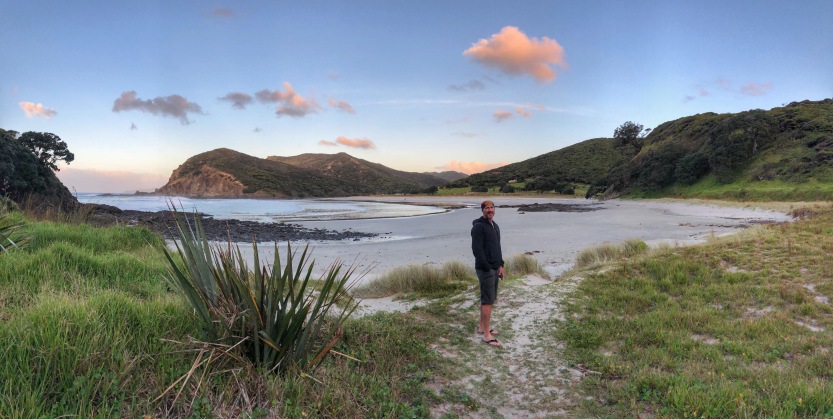 Excited to reach the Cape before the tourists arrived, we got off to an early start the following morning. The track from the campsite continues its steep climbs and descents with beautiful views of our camp behind us and Sandy Bay ahead. 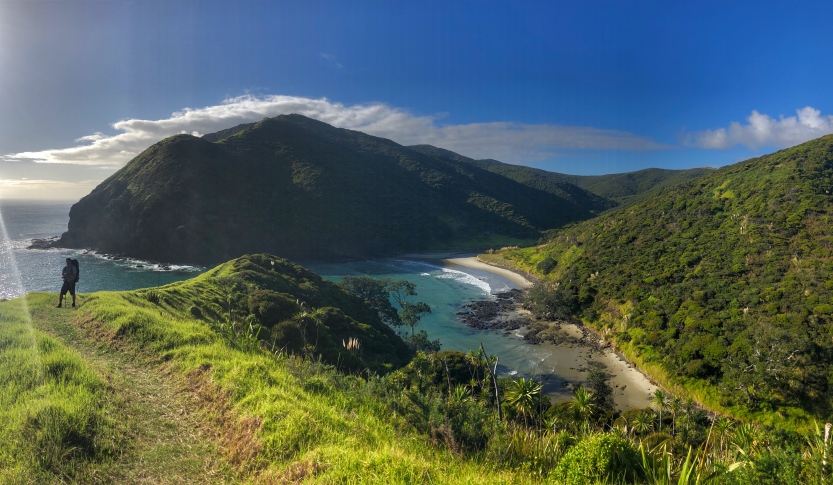 It is only 5km to the cape, so it doesn’t take long before the lighthouse is in distant sight.  As you approach the lighthouse, the track becomes paved and is often filled with tourists arriving in busses later in the day. 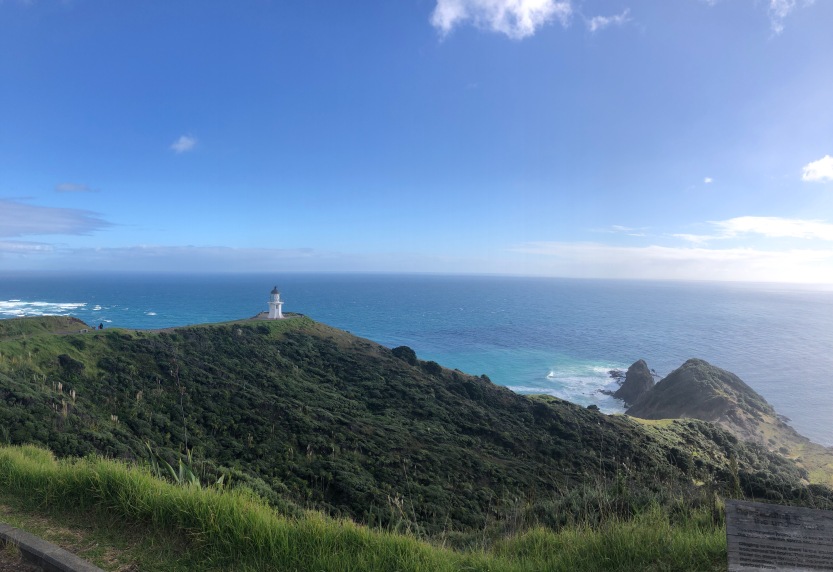 Te Rerenga Wairua Cape Regina is basically known for three reasons 1) it is a sacred site for Iwi, 2) it is where the the Pacific Ocean meets the Tasman Sea, and 3) it is ‘the northernmost point’ of the north island.  On the rocks just beyond the lighthouse stands a kahika tree called Te Aroha. Spirits descend the roots of this tree on their journey to Hawaiki. Because of its sacredness, this area can only be viewed from a far.  Here you can also see where the waves of the Tasman Sea meet the Pacific Ocean. The whirlpools where the currents meet are like those that dance in the wake of the waka. They represent the coming together of male and female, the creation of life. 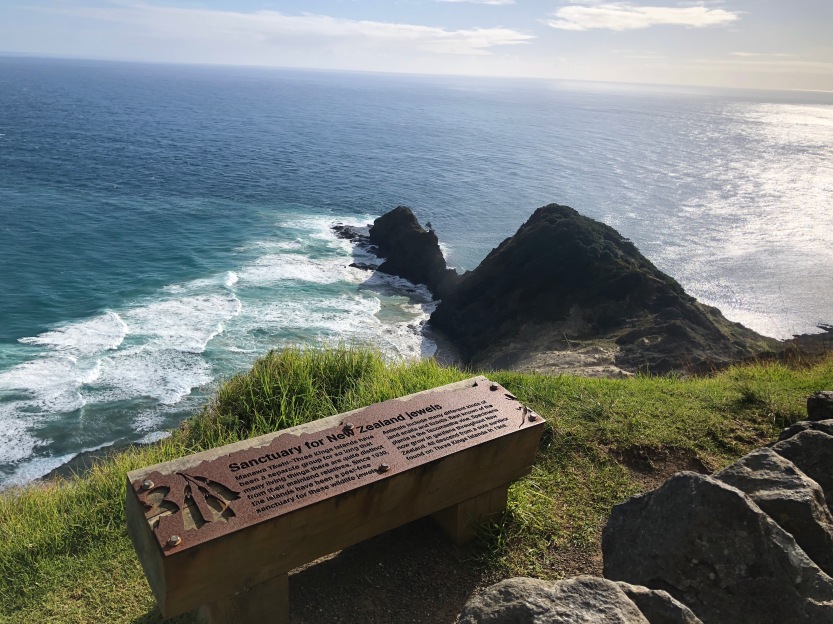 A white lighthouse, standard all around NZ, and a directional sign indicates distances of various cities from the cape.  Although it is considered the northernmost point, in fact it is not.  The Surville Cliffs to the northeast reach just a wee bit further in the Ocean. 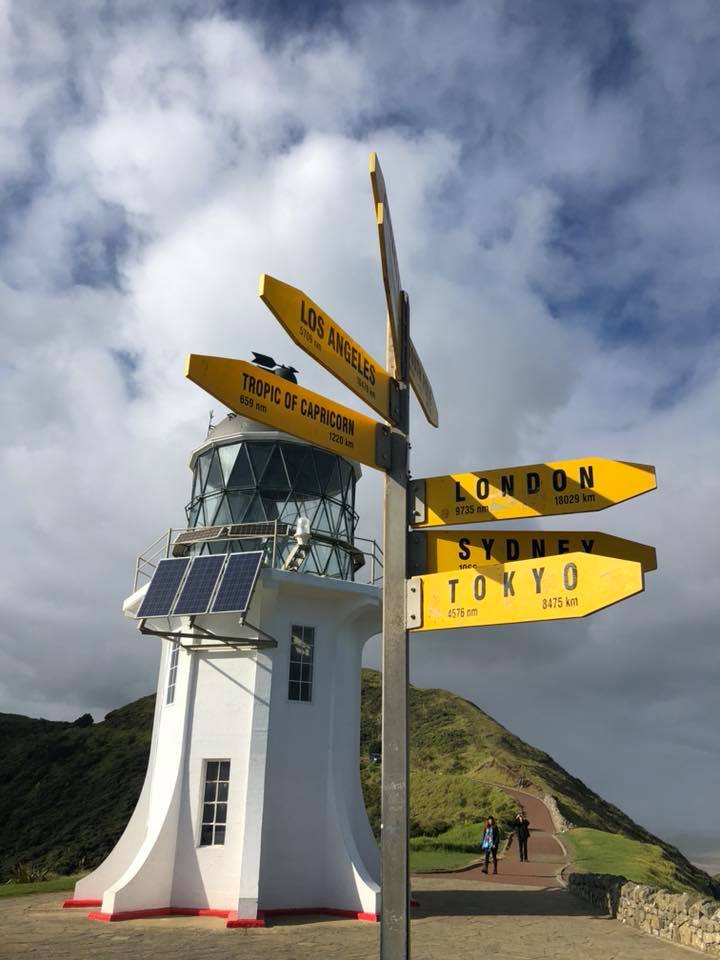 From here we started our journey along the west coast towards Te Werahi Beach. It was unfortunate that a few small showers were passing at this time as this view is typically far more stunning than this gloomy picture portrays.

There wasn’t a lot of information about this section of track, but we were aware that crossing the Te Werahi Steam at high tide can be challenging. We quickly learned that it isn’t the stream that is the issue, but rather the rocky cliffs just before reaching the beach.  There was absolutely zero way to cross along the sand as the tide crashed violently against the rocks.  We unsuccessfully tried to bushwhack our way through flax and gorse in the hills, but were left exhausted and blooded after hours of failed attempts so we waited it out (kind of). We enjoyed an extended break with an easy walk along the beach for a few miles.

Once we reached the hills at the far end of the beaches, we climbed into one of the most remarkable and unexpected sections of the track.  The deep red and orange rocks and wind eroded cut sand tracks reminded me of being in the Badlands of South Dakota. 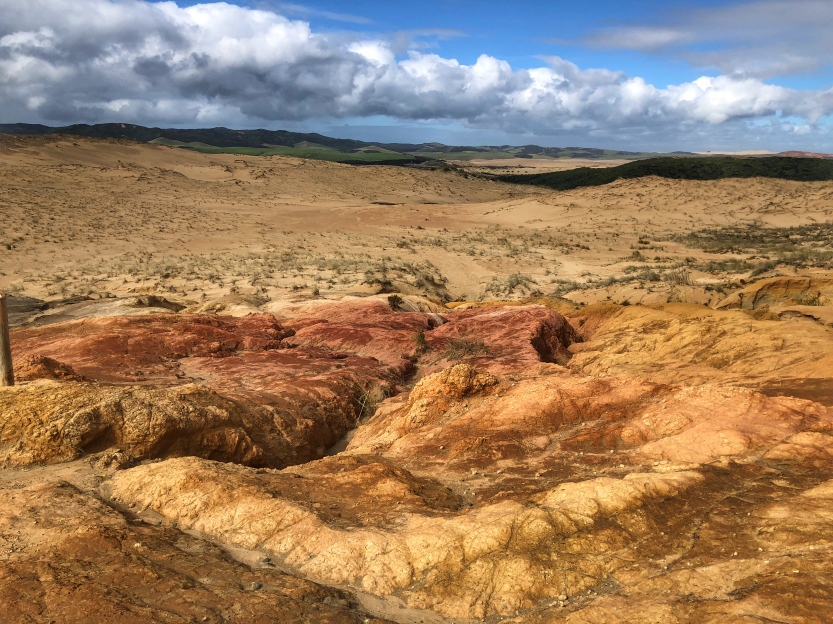 It was a lovely arid landscape between the wetlands of Te Werahi Stream and the vegetated hills of Cape Maria Van Diemen.  This was my favorite section of the hike. If it weren’t for sunset looming in a few hours, I would have loved to stay to explore this area further.

From the cape, views towards Twilight Camp can be seen for the first time.  This little camp is designated as a ‘micro camp’ with a small grassy area fitting 20 or so tents.  It is perched on a bluff overlooking the west coast, the cape (north), and Scott’s Point (south). After setting up our tent, we enjoyed dinner on the beach, feet in the surf, and a lovely salt swept sunset. Another stunning end to an epic day. 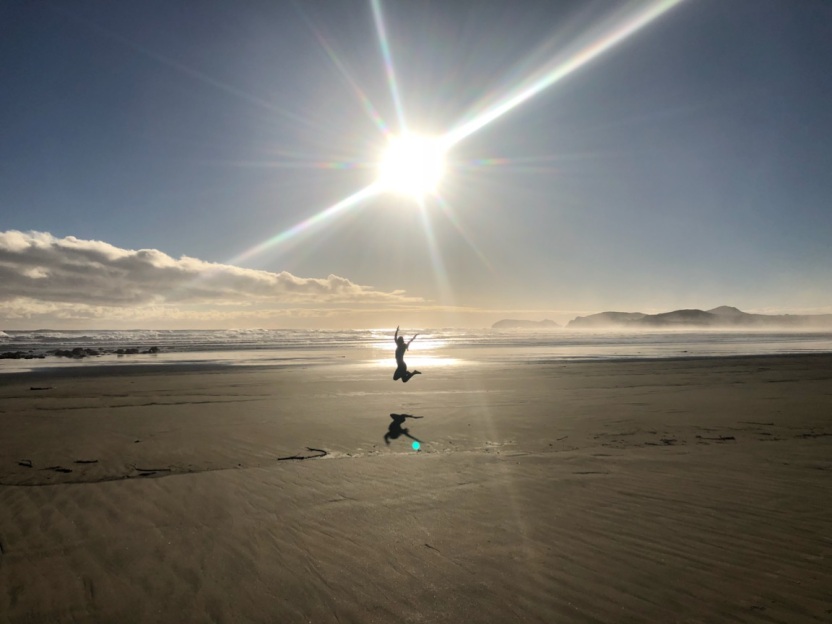 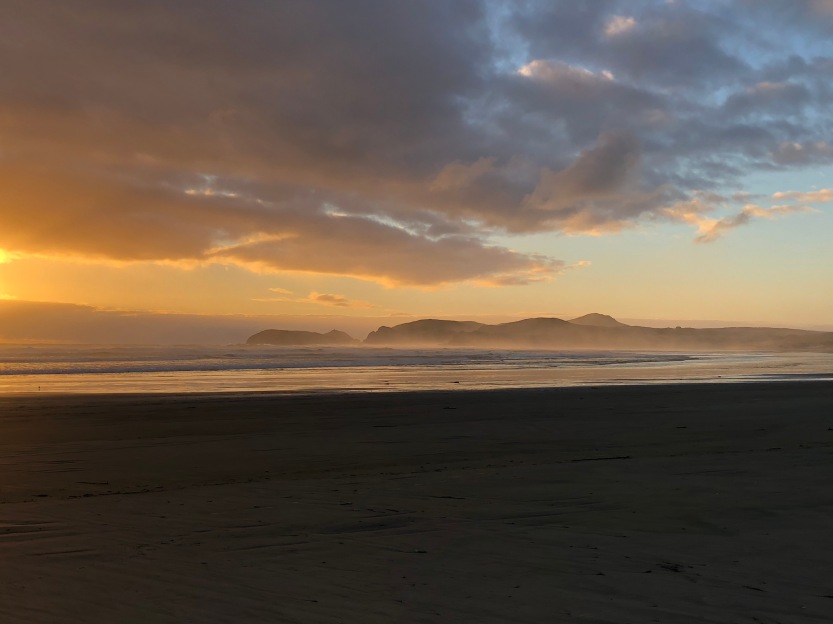 The hike to the Te Paki Stream is short and easy.  While it is lovely, the landscape diversity and beauty don’t quite compare to days 1 and 2. After crossing some rolling hills, much of the hike is along the west coast’s 90 mile beach and Te Paki Stream. 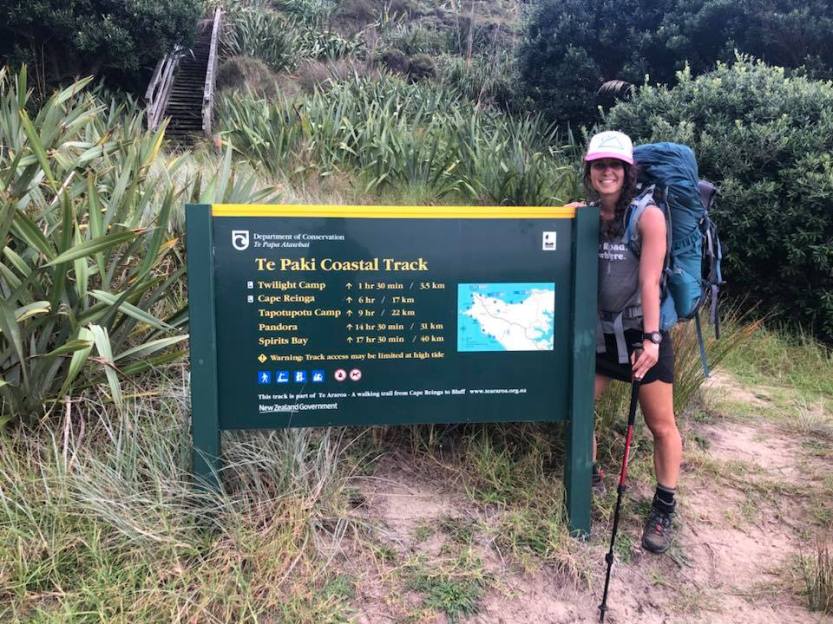 We kept ourselves entertained with breakfast breaks, sand writing, and exploring the clams popping out of the sand for a bit of air as the sky clouded over. 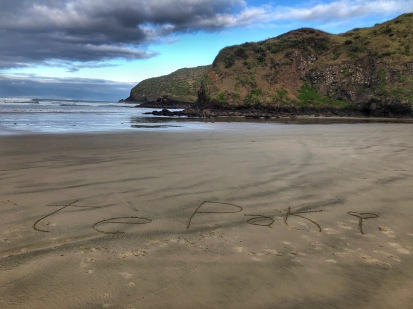 90 mile beach extends far beyond our turn to the stream, but despite its name it is actually only 54 miles in length.  The beach is famous for its left hand break and for basically being a highway.  On a summers day, this beach is filled with dune buggies, wind races, cars, and tour buses. On an autumn morning, it was only Brian and I.

The last bit of track takes you up the Te Paki Stream to the sand dunes.  The tour busses love to tell tales of locals getting stuck driving the stream and beach, but I have seen car after car drive with ease.

The dunes in this area are massive and because they are close to the roadway, they are a popular destination for sand boarding.  Having grown up in Michigan and lived in Colorado I have spent some time on dunes, Sleeping Bear and Great Sand Dunes National Park and these are equally as impressive. 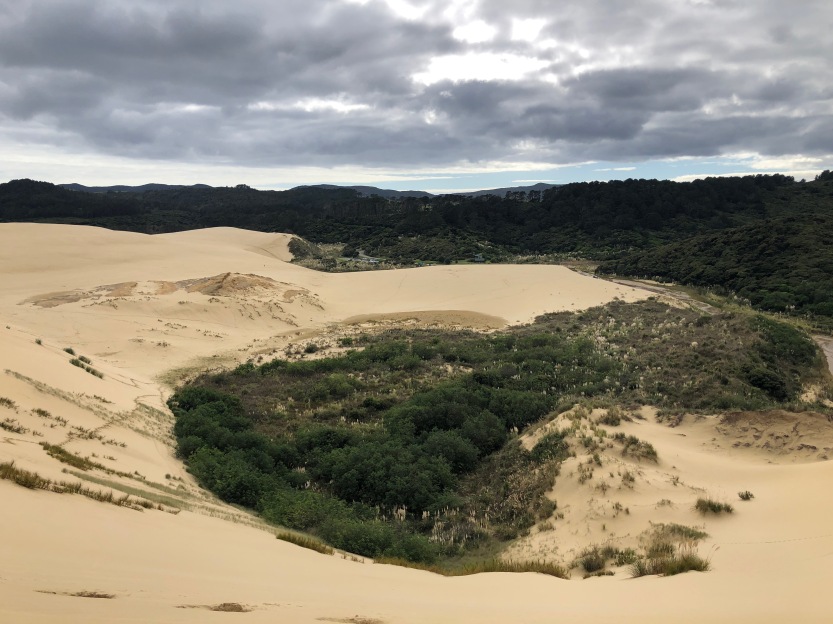 What a playful end to a soul enriching 3 days on the Te Paki.