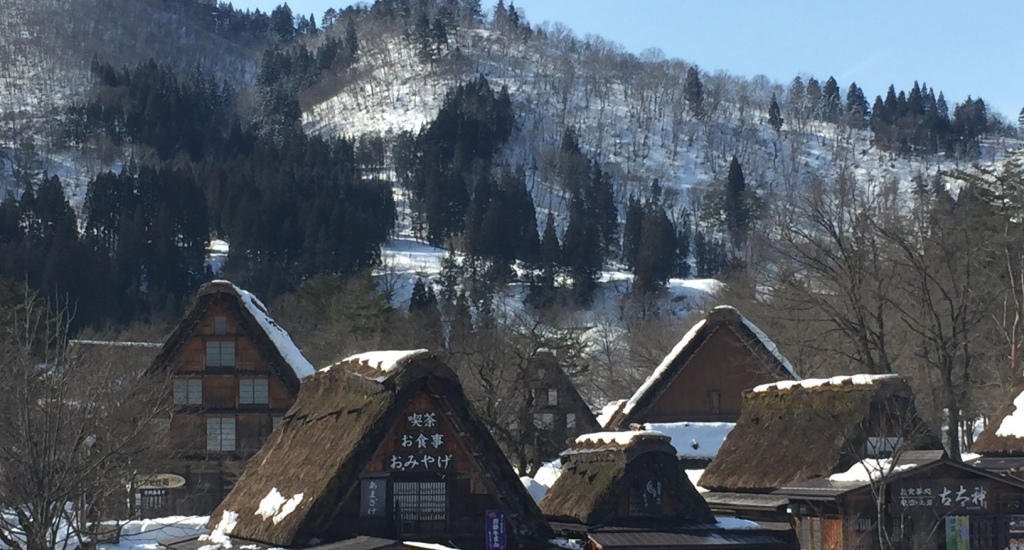 Back on the bullet train we were headed to the Gifu and Nagano Prefectures in the Alps in search for more snow.  Bri prepared for the journey with a bento box and beer and I was entertained by Japanese comic books.  A train change to slower line through the mountains is also necessary on this journey. 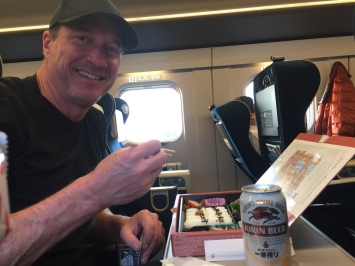 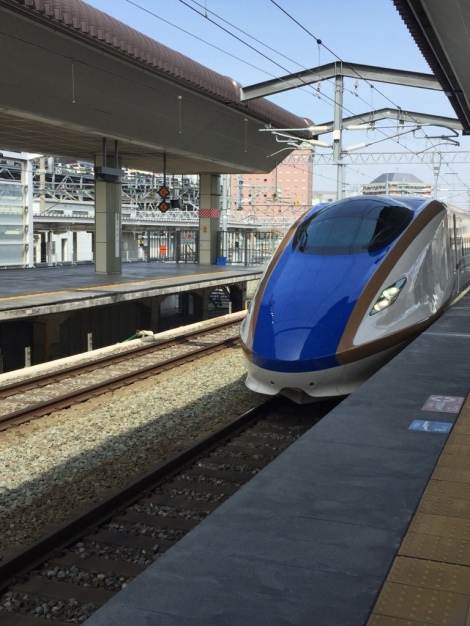 Our first stop was the beautifully preserved town of Takayama in the Hida region. The city is known for its highly skilled carpenters during the feudal ages and its Takayama Matsuri float festival today.  Days are best spent here wandering the narrow streets lined with exquisitely crafted dark wood buildings that house sake breweries, craftsmen, and snack shops.

If there aren’t displays of sake in the shop windows, the breweries are best recognized by the large ball hanging above the door.

The region is known for their Hida beef and nearly every place was serving it up. Many of the shops are simply tiny window opening where you can get equally tiny hida beef buns and hida sashimi snacks. There are many sit down shops serving up warm tea and soup as well. 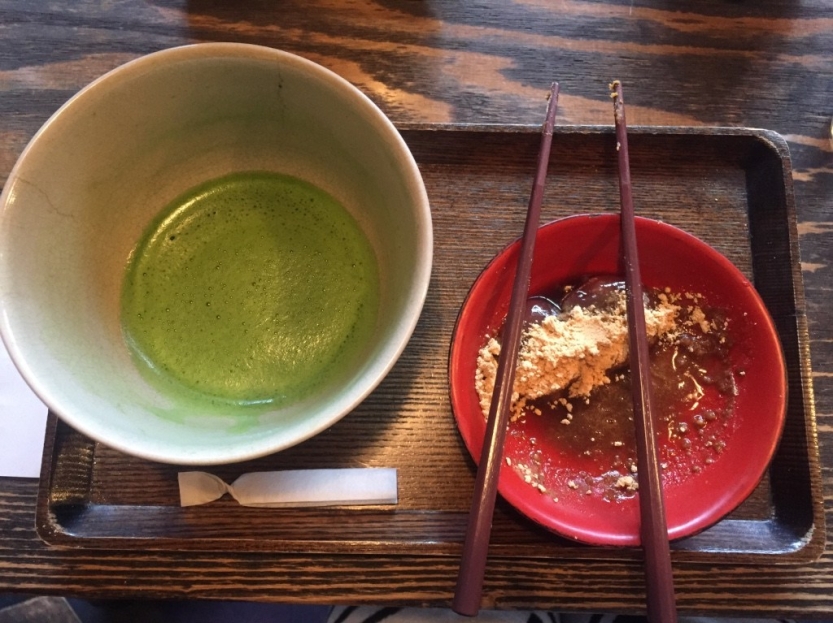 There is plenty to see just outside of the main busy section of the historic district. Both the Kusakabe and Yoshijimake Heritage Homes show off the traditional tatami mats, shōji, paintings, and irori homes.  An irori, a kettle in a sunken hearth used for heating and cooking, is common to most places in this cold mountainous region.

Like any Japanese cities, there are always temples and shrines to visit. The temples in Takayama where much smaller than those you will find elsewhere, but their craftsmanship was exquisite and unique to place. 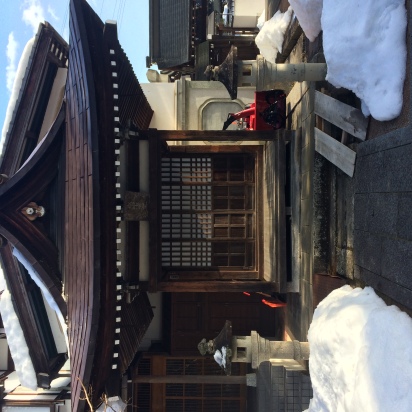 A lovely cedar forest surrounds the edge of the city and river divides old Takayama with the newer more modern area.

We stayed only one night in Takayama at Ryokan Asunaro. This was a less traditional ryokan, with a shared dining room and more westernized plumbing. The food was incredible and plentiful here. We had trouble finishing our ten course meal.

About two hours by bus is the small rural farming community of Shirakawa-go.  This village is a UNESCO world heritage site, famous for their traditional gassho-zukuri farmhouses over 250 years old. Sadly, the world heritage status is being threatened by tourism and we could easily see why as their was a lineup of busses when we arrived. 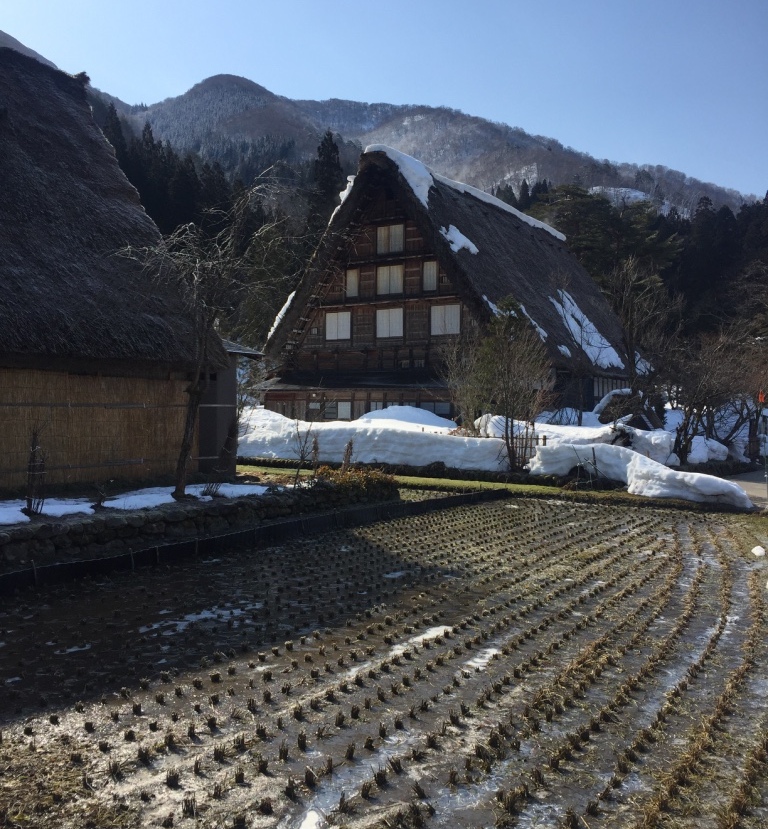 Gassho-zukuri means “constructed like hands in prayer” and refers to the steep thatched roofs resembling the hands of Buddhist monks pressed together in prayer. The steepness of the roofs also helps to shed snow as this region receives quite a bit. The farmhouses are heated by irori and have attacks used for cultivating silkworms. 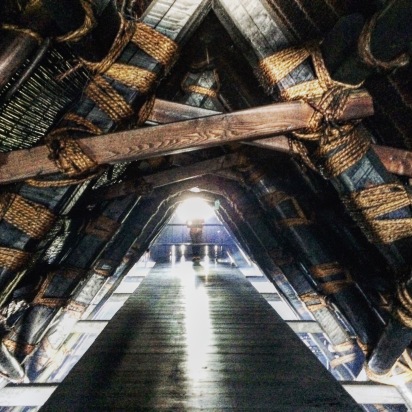 The charm and character of this little village is so special.  I hope they find a way to better balance their agricultural way of life and tourism. 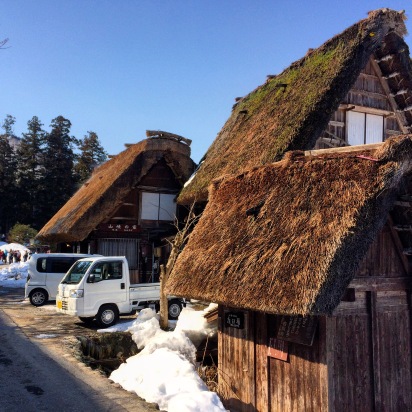 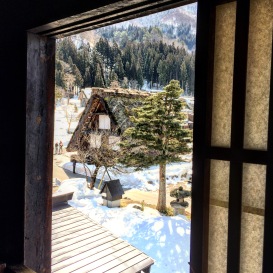 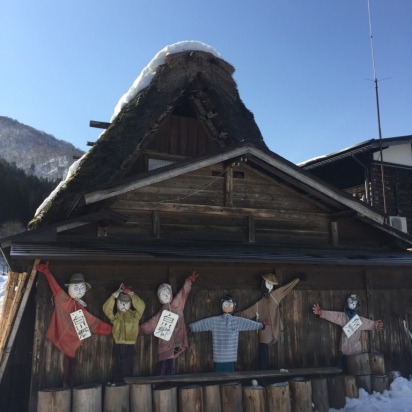 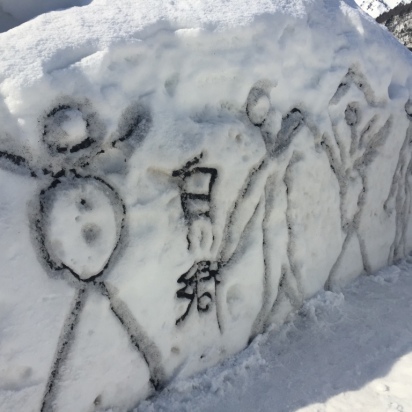 Because of our late start traveling to the snow monkeys, we spent the night in Nagano (most stay near the park in hotels with onsens). The city looks as many other Olympic hosting cities that were built specifically to host the games, run down, old infrastructure built for a capacity that the city doesn’t normally experience and oversaturated with tall, architecturally void hotels.  You certainly won’t have trouble finding a room here. We did however enjoy our first curry meal and diner experience. Like all meals in Japan, it was incredible and an ‘experience’.  Here you order from a machine and the meal is cooked in front of you by a cook.  I am not sure why the machine is necessary?!

Traveling to Jigokudani Park is a bit of hike, requiring multiple train changes along slow old lines and a non regular shuttle to park entrance.  Once there, it is a lovely forested walk along a stream to an onsen filled with playful snow monkeys. These red faced, grey furries are Japanese Macaque monkeys who love the snow and their time relaxing in their onsen.  While the river contains several natural hotspring areas, there is one constructed onsen that is most popular with the monkeys.

The monkeys are playful with each other and with tourists as well.  Be sure to watch where you are walking as these little ones will run your feet. 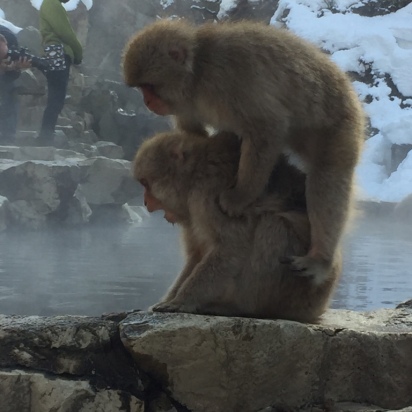 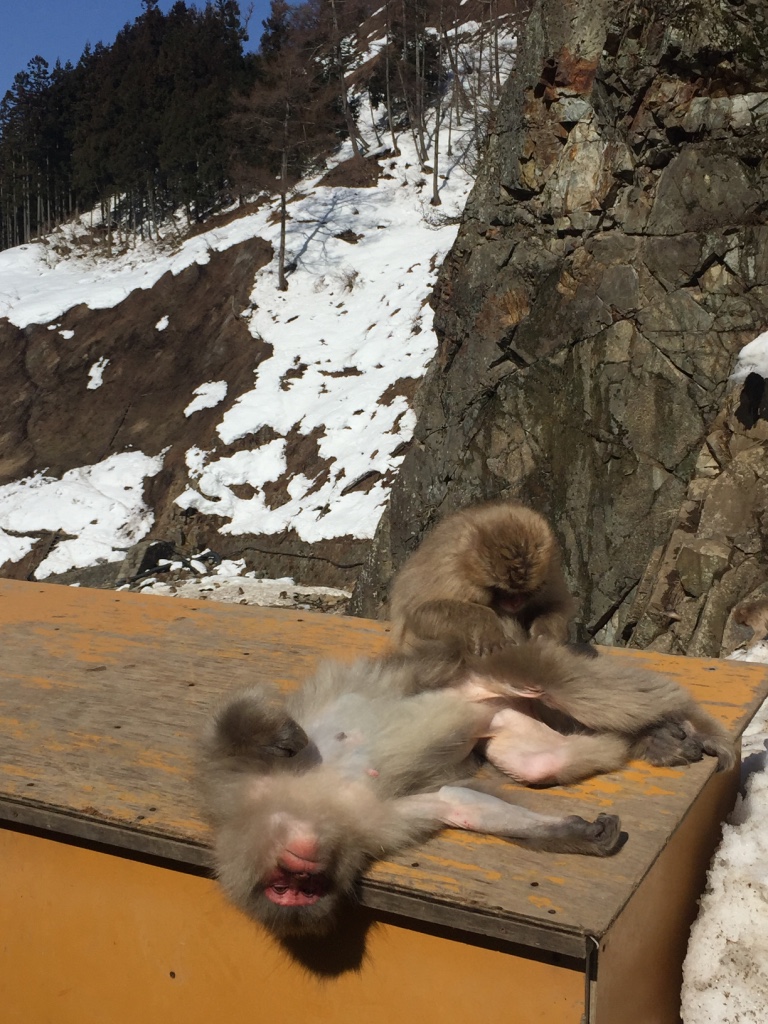 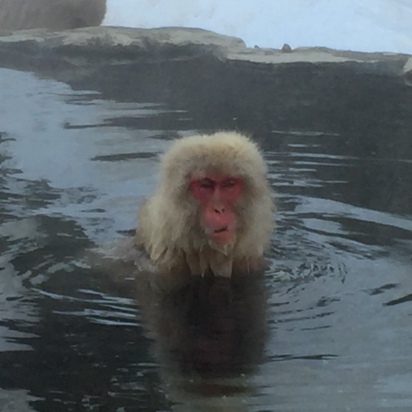 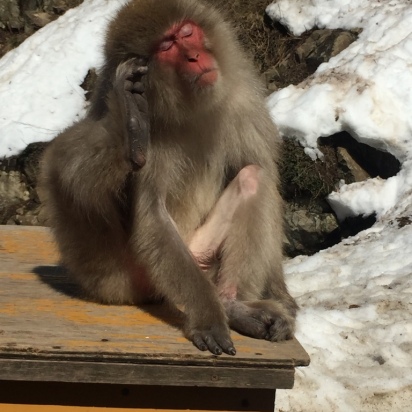 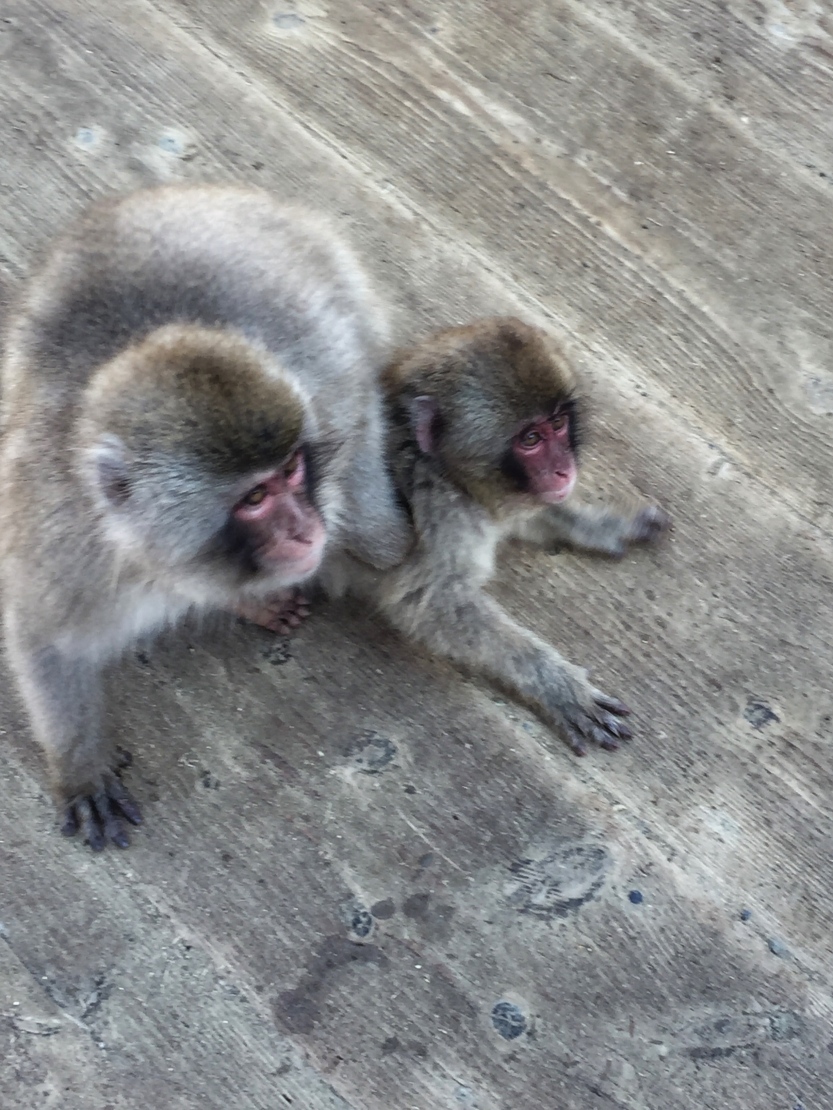 Spending hours watching these playful creatures was the perfect finale to our mountain time.