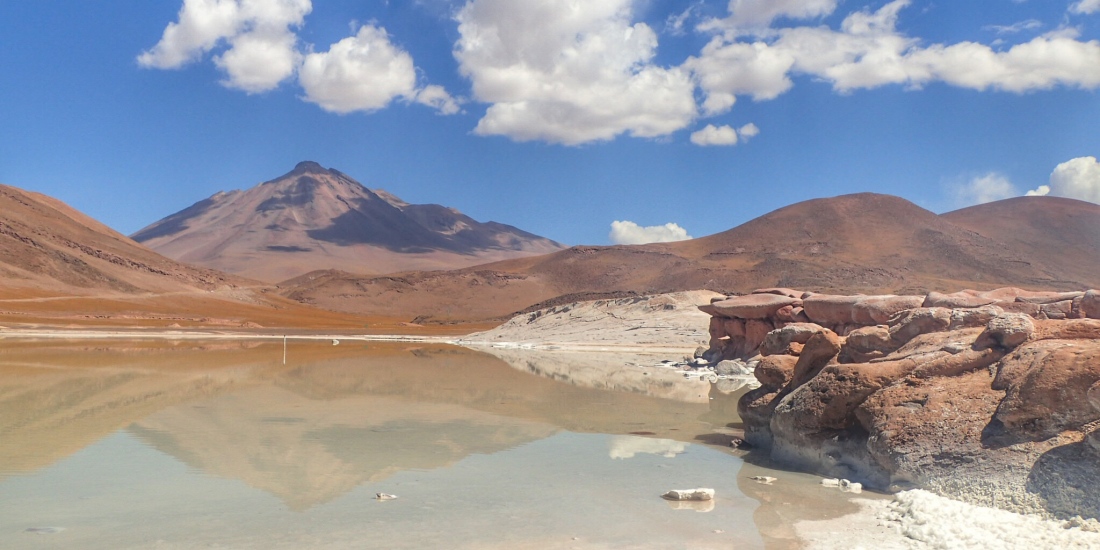 “This creed of the desert seemed inexpressible in words, and indeed in thought”
– T.E. Lawrence

I have always been a desert lover, not so much for the heat but rather because of the wide open landscape, the sound the wind makes as it blows across the sand, and the intrigue about the animals that are able to survive there.  The Atacama was a desert I had dreamed of for years.  The driest desert on earth often looks more like the moon than a desert with a diverse landscape of salt lagoons (salares), wind sculpted dunes, colorful striped stratified cliffs. The Atacama is also one of the best locations on earth to appreciate the Milky Way’s glittering collection of stars, which can be observed best through the largest collection of telescopes at the public observatory.

San Pedro de Atacama, a sparsely populated town at 8,000 ft is the main hub for exploring the Chilean Atacama. It was originally settled by the Atacameño tribe and later developed by the Spanish whose influence is recognized in the many churches that dot the landscape.

Today the town is filled with tourists, which is an economic necessity for its residents. While the city may be bursting within its sandstone walls, once you hit the open road you will often feel alone in the landscape. 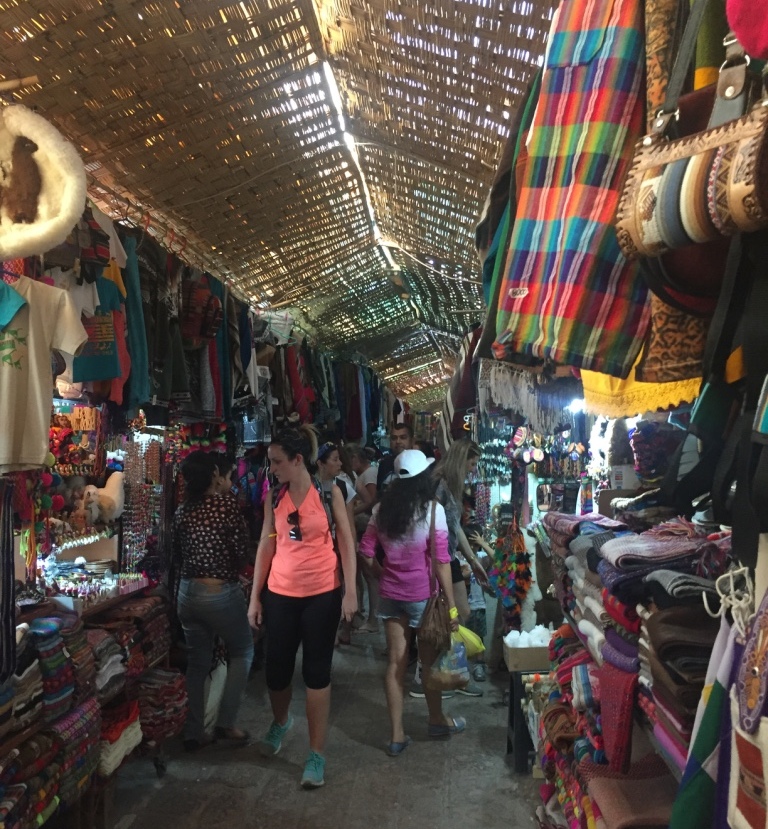 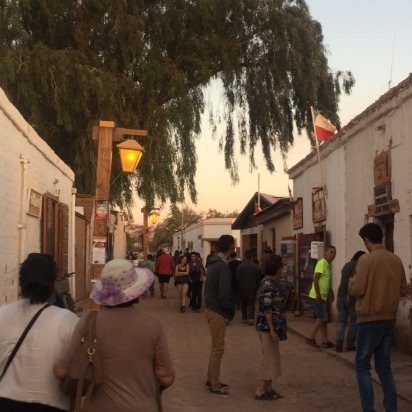 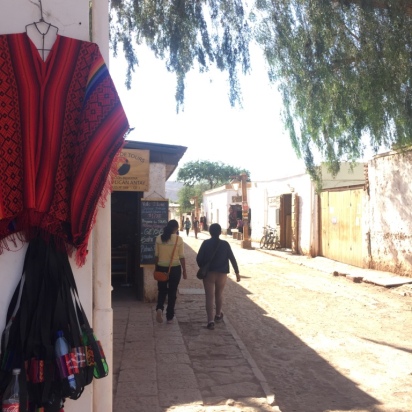 Stray dogs and cats are important inhabitants of the city as well. 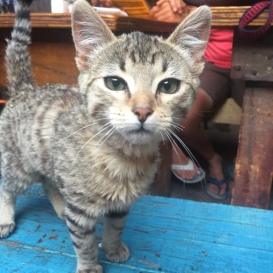 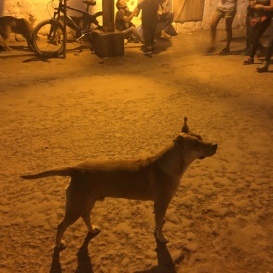 Since the town is so dependent on tourism, the best way to see the Atacama is to book with a tour guide. If you have read any of my former posts, you will know that I despise large tour groups and buses so we booked a private tour with one guide and one driver who of course became our best friends by the end of the trip. There are car rentals to explore the desert on your own, but they are pricey and often residents remove signage indicating where gas stations are in protest to those not supporting their economy.  We found that some restaurants outside of the tourist area refused to serve people that were sans guide.

Each morning we had an early start and a fairly late return with multiple destinations on our itinerary.  Our fist day included Pierdras Rojas, Miscanti and Miñeques Lagoons, and Salar de Atacama.

On the way to the red stones, tiny animals and desert plants dotted the vast landscape as volcanoes and hills rose in the distance.  This was our first spotting of the vicunas, an animal similar to the llama. 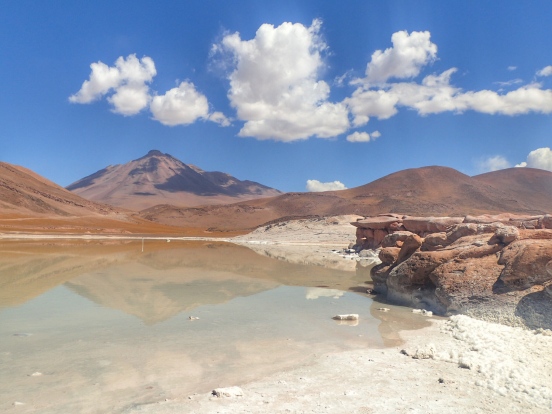 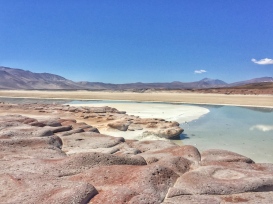 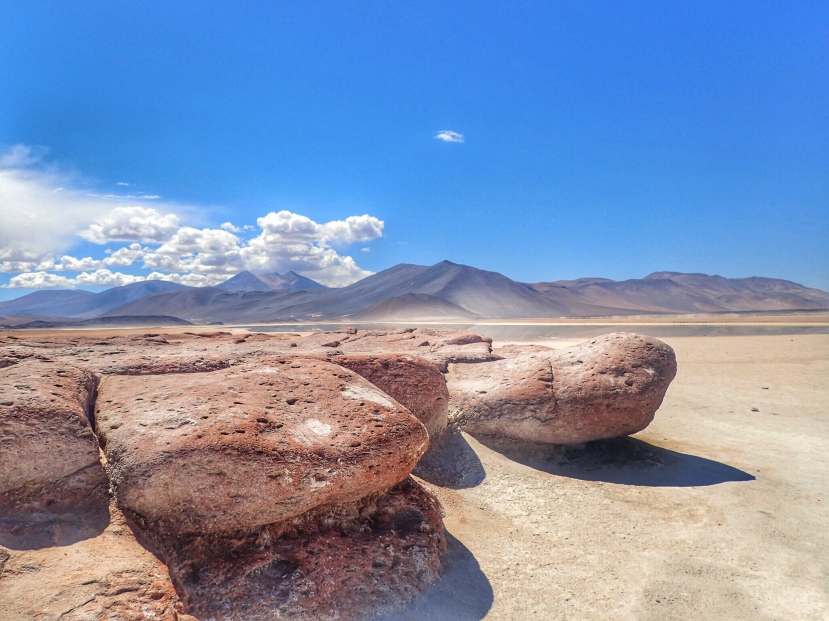 The flat was most certainly not ice, as it is fed by a thermal source of water, which we could feel through the soles of our shoes. Here you can capture one of those classic salt flat reflection shots that the area is known for. 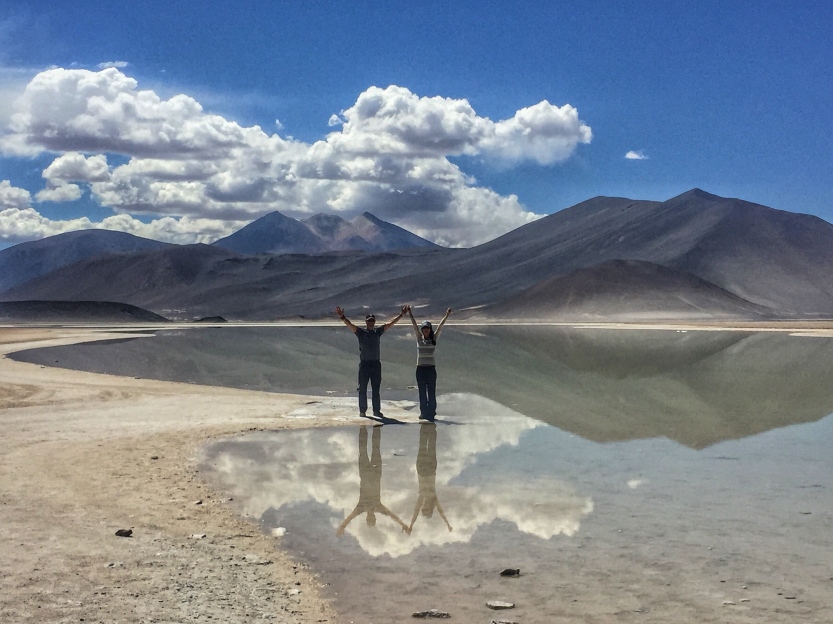 Lagunas altiplánicas (high plateau lakes) consist of a pair of lakes, Miscanti (the larger one) which feeds a smaller lake, Miñeques. From a far, the purple hues of the surrounding volcanos cast their deep colors onto the lakes, muting the blue tones.

However, as you grow closer the blue brightens and the yellow hues from the desert grasses light up the landscape.

The white sandy road leading us from here is blinding in the near cloudless sky.  It is most certainly a road less traveled.

Salar de Atacama (Atacama Salt Flats) and Laguna Chaxa (Chaxa Lake) was our last stop of the day. I had really been looking forward to this, because FLAMINGOS! The reserve has three different species of flamingos, andinos (Andean), chilenos (Chilean) and James. The color of their legs and tail are what differentiates the species, but it was challenging for me to distinguish this from a distance. 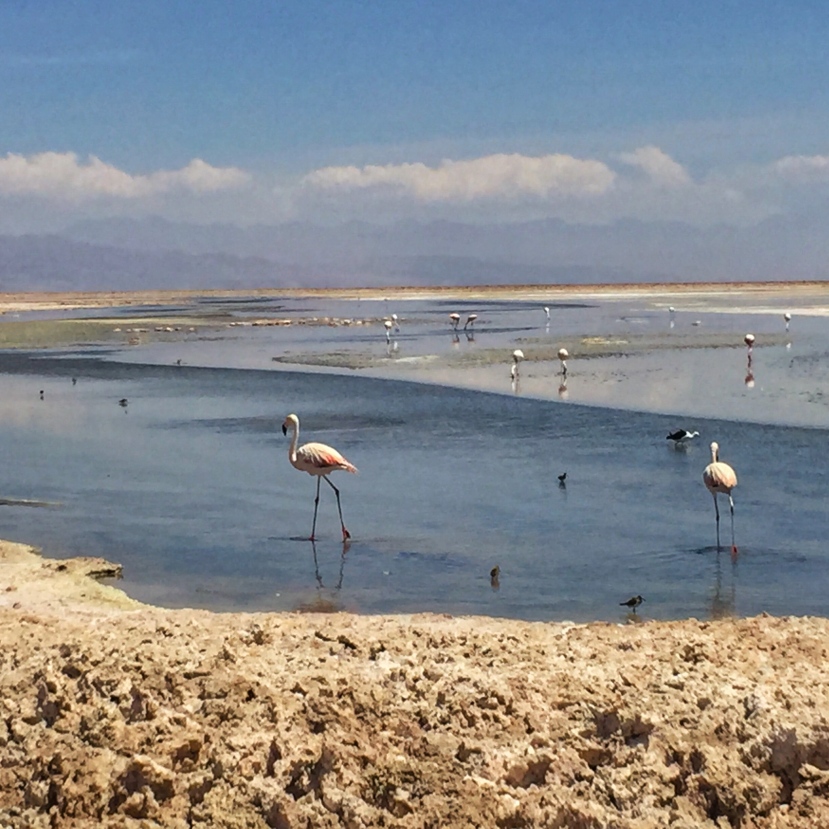 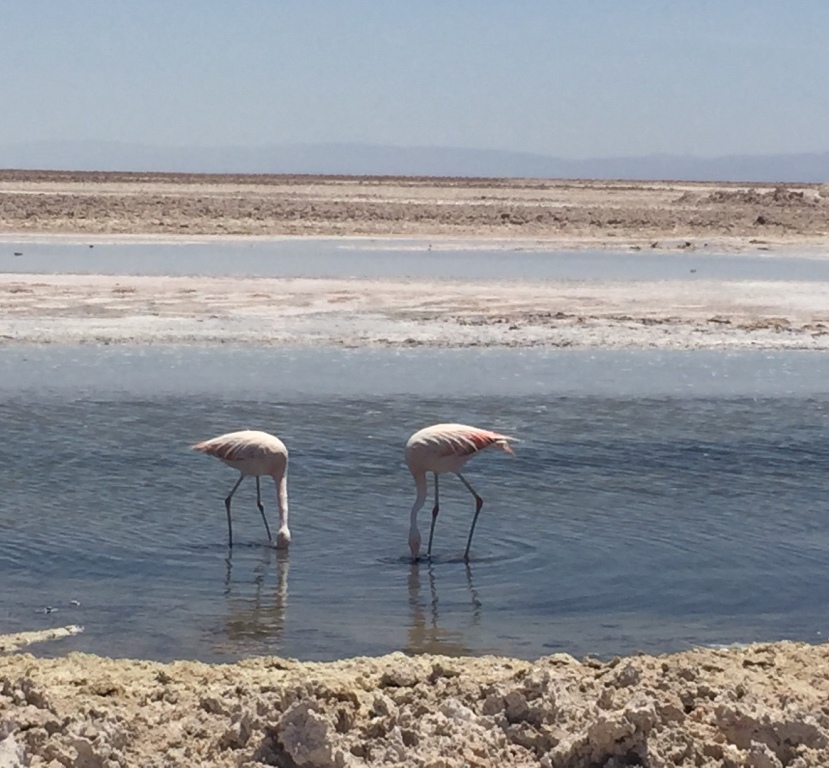 I had anticipated that the landscape would be dominated by the white salt deposits, but instead a kaleidoscope of reds, pinks, and purples interrupted the salt deposits along the water’s edge.

There are still plenty of salt deposits adding texture and pattern to the landscape.

The sun was still shining as we returned to hotel, Terranti Lodge for some pool time and cocktails. 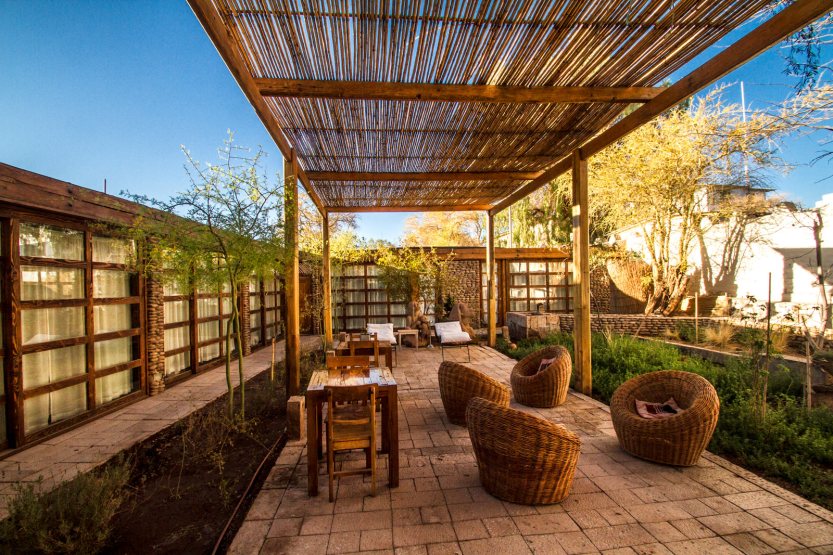 We were up well before the sun on day 3.  Today we would make the lengthy drive to the Geyser del Tatio and Village of Machuca and enjoy the late afternoon sun in the Valley de la Luna.

The Geyser del Tatio is a high elevation (4,300 meter) geothermal field of steam geysers, fumaroles, and pools of boiling water. They are only active in the early morning hours, which means this particular feature is loaded with tourists…yet somehow, the steam often shields them from view.

After strolling the red stone designated paths, we enjoyed a quick dip in the nearby hot spring before breakfast was served before heading to the village.  The drive to the village is also lengthy, but you will be entertained by passing llama herders before making a brief stop a beautiful lush green wetland?! To see this little green oasis in the middle of desert was so unexpected.

The tiny Village of Machuca is inhabited by ancestral people of Chile. This small high altitude village is highly dependent on the passings tourists to supplement their agriculture and cheese production. Hike to the small thatched roof church and try a llama skewer upon return. This is a charming stop and we were grateful for the opportunity to chat with the locals. 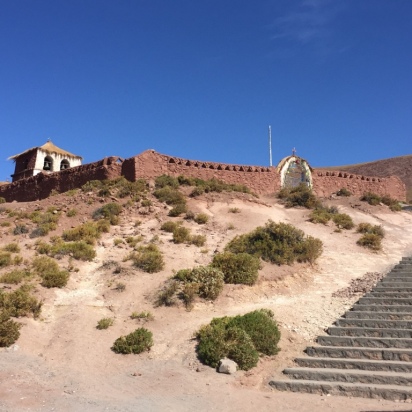 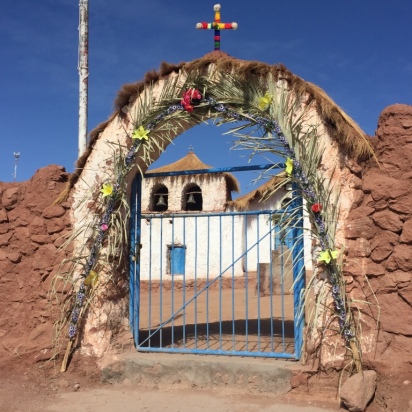 As you leave the village, you will pass by future skewer dinner, another lake filled with flamingos, and several lush green canyons…so much unexpected green again!

We spent our final evening in the Valley de la Luna (Moon Valley).  The evening light and cooler temperatures, make late trips to this area more popular. Despite the crowds here, there is so much to see that most places people were dispersed in ways that allowed you to find quiet moments.  The valley is an incredible collection of stones, salt, sands, cliffs, and caves that were formed by floods and wind erosion creating a variety of colors and textures.  The name says it all, you will feel as though you are walking on the moon as you explore this valley. 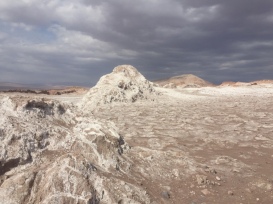 The caves with salty textures… 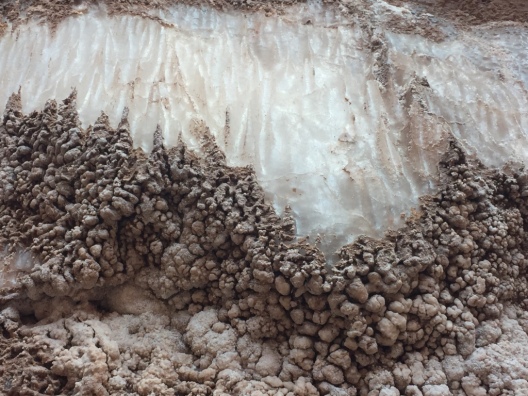 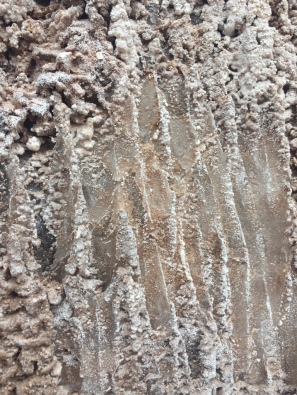 And the evening sunset over the moonscape completes our tour de la Atacama.

The following morning, Eduardo our driver took us to the airport out of the kindness of the his heart in his personal sports car with giant bumping speakers.  Travel does that…it connects you with people from all over the world.  We miss our friends of the Atacama.