I had been dreaming of a trip to the Atacama desert for years, but my partner’s South American dream was Patagonia. Since I had already been to Argentinian Patagonia years ago we decided a trip covering nearly the entire length of Chile would satiate both of our desires. After a long flight across the Pacific and an evening in Santiago, we headed south to Puerto Natales, the gateway to Torres del Paine National Park.  It is a bit of journey to reach Puerto Natales. It requires a 3.5 hour flight from Santiago to Punta Arenas and a nearly 3 hour bus trip to Puerto Natales and another 2 hours bus ride to the park entrance from there. There are endless bus service options between the cities and all seem to be comparable. We chose Bus Sur, which we used throughout our Patagonia trip.

Puerto Natales is a quaint and colorful town at the mouth of Ultima Esperanza Sound. The lively streets are filled with endless dining options, tourist and gear shops, and expressive art.

We had a fabulous fresh seafood dinner at Cafeteria Cangrejo Rojo and stayed at the Weskar Lodge. The lodge isn’t in the heart of town, but it is an easy walk along the sound to get there.

After a night in Puerto Natales, we were off to Torres del Paine National Park to hike the W circuit. This 44 mile (71 km) circuit follows the lago (lake) side of the Torres del Paine Range. The hike is often completed in 5 days/4 nights or 6 days/5 nights with one of those days/nights dedicated to reaching the park and settling in a refugio for the evening.  You can book the accommodations yourself or work with Fantástico Sur who are knowledgable about all of the options available to you and can easily book things that may not be available online. They offer guided options as well for people that aren’t comfortable hiking alone.

Day 1 – Getting to the park

Bus Sur took us along the two hour journey from Puerto Natales to the national park entrance. Here hikers watch a safety video and gain park passes before being transported to either end of the circuit depending on the direction of travel. Most hike the circuit from east to west as we did. If you are traveling in the opposite direction, another lengthy bus ride is required. DO NOT skip the step of getting your park pass. Rangers are very strict with this and we met a few people that were removed from the trek for failure to do this. They ended up having to start from the beginning again with their passes in hand.

It was Christmas when we arrived at Refugio Torre Central, our first night’s accommodation. We were greeted with a glimpse of the ranges and a complimentary pisco sour, a classic Chilean cocktail. The refugio was large, modern, and packed with rowdy hikers. I was a bit concerned that the hiking experience was going to be far different than the wilderness experience that I imagined, but I soon learned that things between the central hubs at each end would be far less congested. 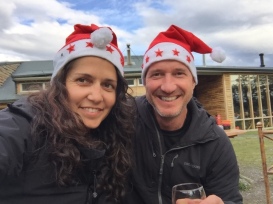 We were up fairly early to get a start on our 13 km trek to Mirador Las Torres.

These three commanding granite towers that rise about a glacial lake are arguably the most recognizable features in the park.

The first stage of the trek is about 1.5 hours of steep hiking up to Regugio El Chileno.  There are lovely views of Mount Almirante Nieto’s hanging glacier through this valley.

Upon arrival at the refugio, hikers usually store their large pack and walk the remaining part of the hike with a day pack.  I was happy to drop my heavy load as it had been some time since I had hiked with a full pack. 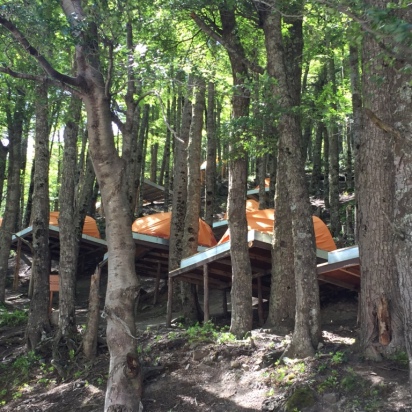 It is another 4km through millennium-old lenga trees, over crickedy yet charming wooden bridges and past various glacier melting waterfalls to the Base Torres Lookout. 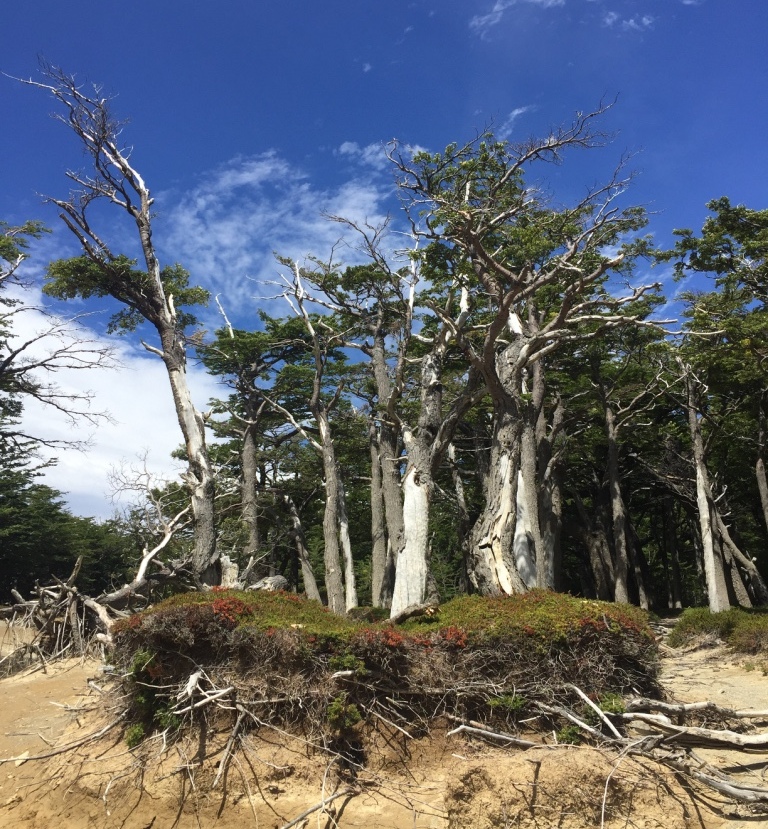 The towers grow exponentially as you approach the lake.  Their massive scale command the view across the turquoise lake.

The hike is a return trip back to the refugio where the tips of the towers can be enjoyed from a far over beer and dinner. 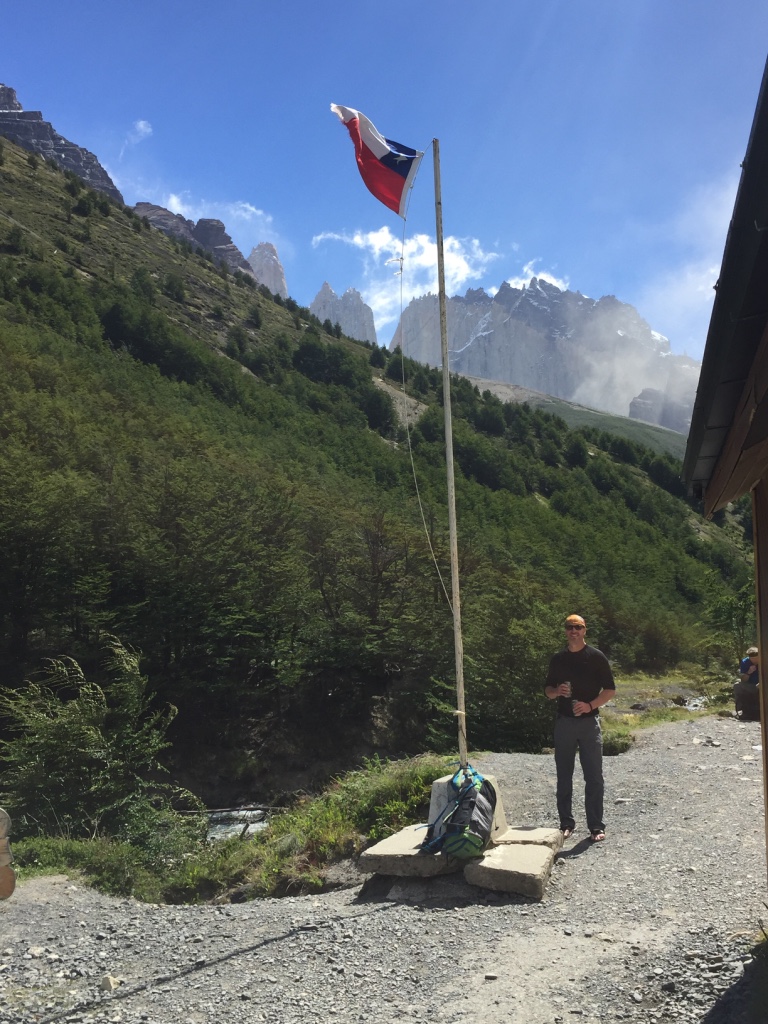 This day is the shortest and most moderate trek of the bunch; an 11km hike along Lago Nordenskjöld that circles the base of Mount Almirante Nieto. Along the way you will see numerous hanging glaciers and red flowers of the ciruelillo or notro trees and cross several swing bridges before arriving at Los Cuernos for the evening. 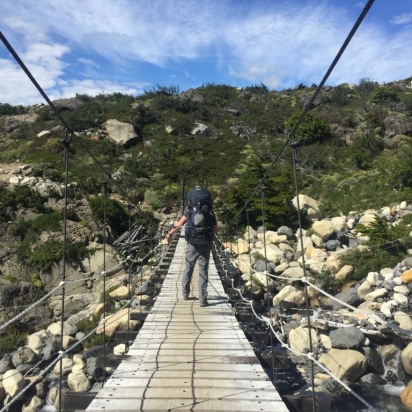 Views of the turquoise lake are breathtaking as the path rises and falls along its shoreline. 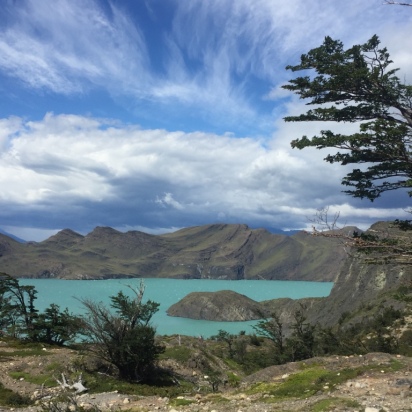 It was here that we would see our first gaúcho leading pack horses for walkers preferring not to carrying their own things…there are all types of hikers along this track.

We were set to relax on spacious sunny deck of the refugio, when a small brush fire broke out nearby.  It took a chain gang with buckets of water and collection of fire extinguishers to put the blaze out. Somehow Brian ended up being on the front lines of the firefighting and was charred quite a bit.

As a reward for his hard work we enjoyed free drinks and a private cabin with a view for the evening. 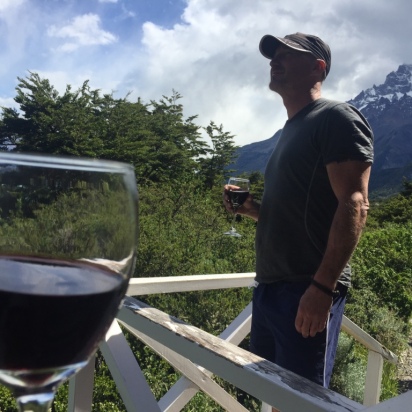 The next day is a big one, 25 km of hiking through the dramatic Francés Valley.  This day would be my absolute favorite for so many reasons. We were greeted by the first rain of  our journey in the morning.  This rain mixed with sunshine produced unforgettable rainbows along Lake Nordenskjöld. 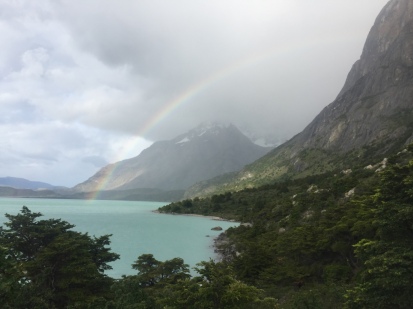 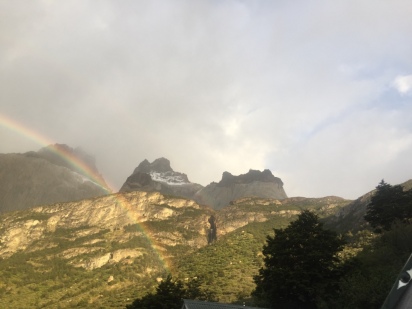 After about 2 hours of fairly easy hiking we arrived at Camp Italiano where we dropped our large packs before heading into the valley.  The clouds were still thick as we headed up the narrow valley, exposing pieces of the dynamic landscape of heaving glaciers, jagged peaks, and swiftly moving streams.  The walk was mysteriously stunning. 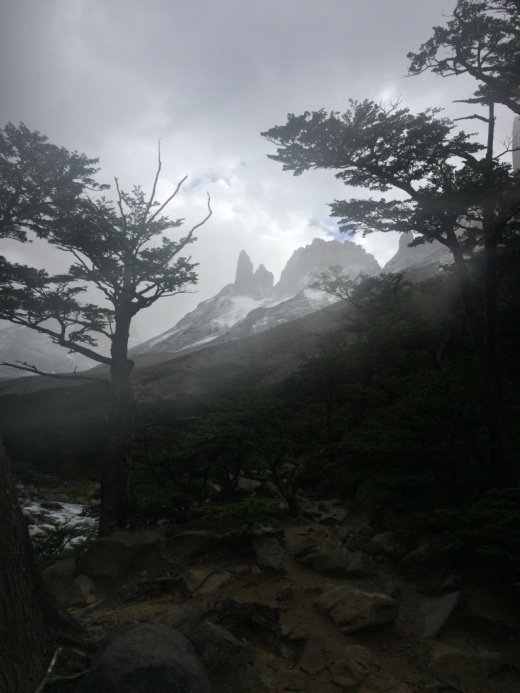 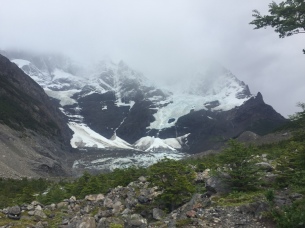 As we reached the end of the track in an area called Británico, the sun pushed away the clouds and we had clear views of one of the most impressive views in the park.  Here we could see the peaks; Paine Grande, Catedral, Hoja, Máscara, Espada, Aleta de Tiburón and Cuerno Norte.

On our return we looked across the valley we climbed with a sliver of Lago Nordenskjöld peaking out off in the distance.

We also found our friends whom we shared dinners, breakfasts, and trail moments together each day.  This would be the last time where the five of us were together again. Great friendships are always formed on the trail.

One last look up the valley before descending down into the forest surrounding Camp Italiano.

There was still considerable distance to cover in order to reach our refugio at Paine Grande Lodge. This section is known as known as Pehoé because of the views of Lago Pehoé as you descend to the refugio located on its banks.  It can be very busy as many day trippers travel this route to and from the valley. 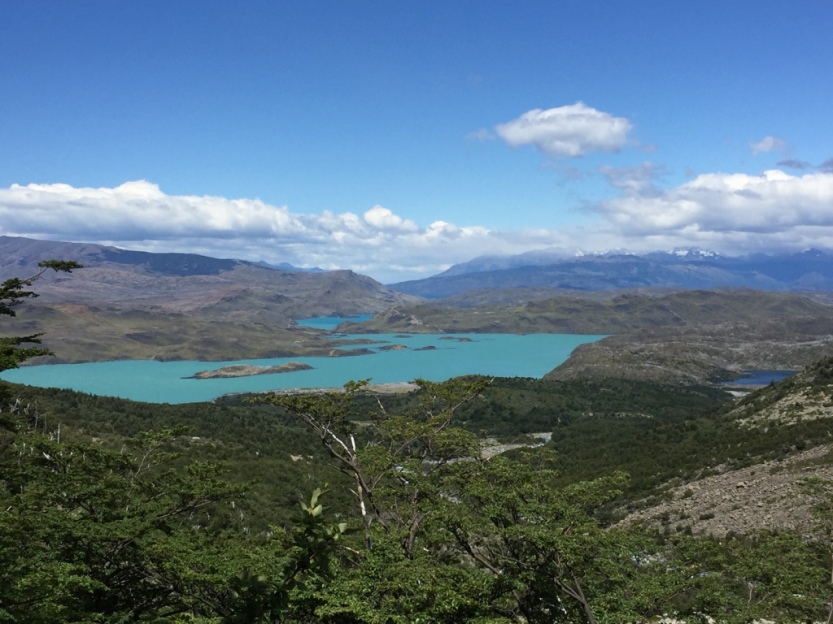 Just as we arrived at the refugio another rainbow appeared, bookending our long hike for the day.  This would be our last night spent on the circuit and it was busy one at the refugio. 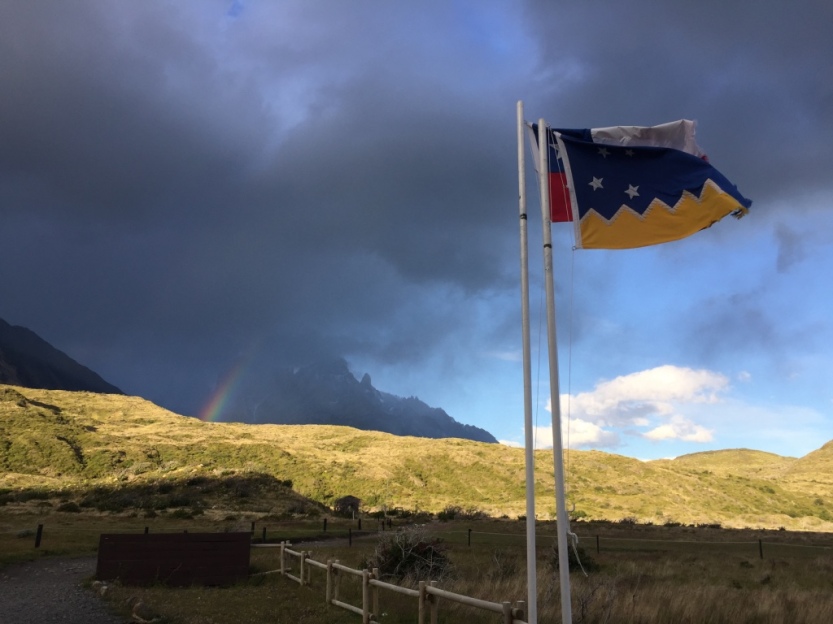 We had one final hike the next day, a roundtrip 22 km trek to the Grey Glacier Lookout. Just over an hour into the hike we were greeted with our first distant views of Grey Glacier, Cordón Olguín, and the ice flows.

Eventually, a closer view of the glacier is reached.

Many continue further along the edge of the glacier to complete the entire circuit around the ranges, the O circuit.  For those on the W, it is backtrack back to Lake Pehoé to ferry hikers to the road for pick up.  We had such a picture perfect departure from the W with views of the Torres del Paine Range. 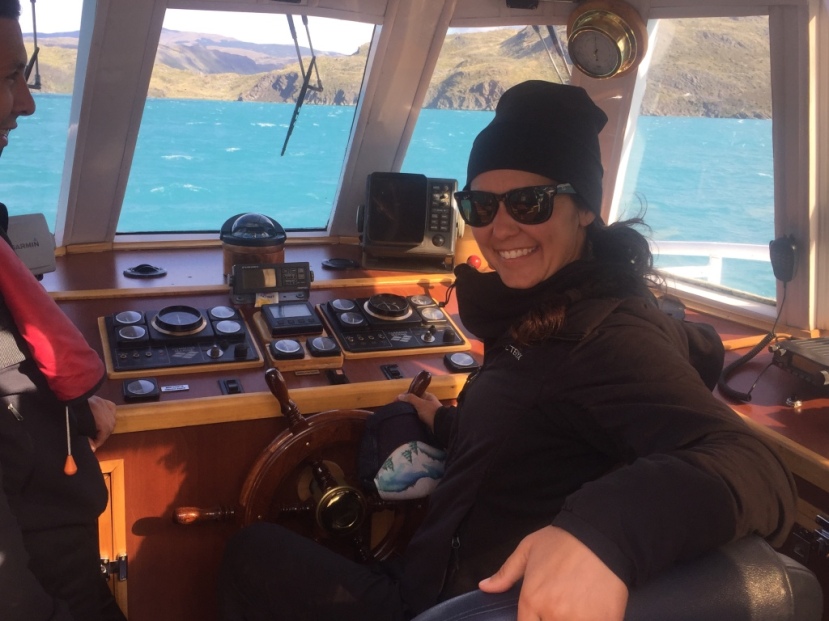 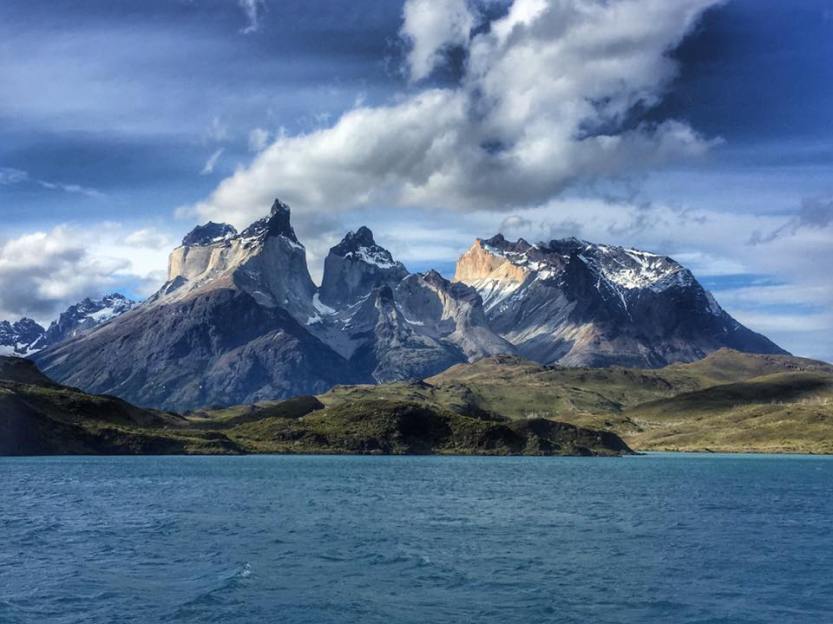 Rather than loading back on a bus to Puerto Natales with the rest of the hikers, Brian and I closed out our Patagonian experience at the Río Serrano Lodge. Recovery is best with pisco sours, passing horses, and a pink sunset.  Patagonia is magic.