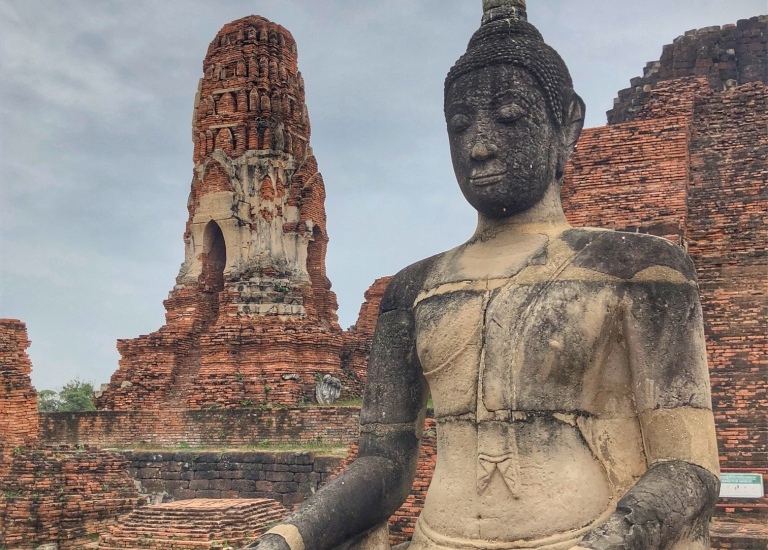 Empires inevitably fall, and when they do, history judges them for the legacies they leave behind – Noah Feldman

Ayutthaya was the capital of the Siamese Kingdom from 1350 to its fall to the Burmese in the 18th century. At one time, the city was the world’s largest and most cosmopolitan urban areas and a center of global diplomacy and commerce.  Today it is beautiful collection of ruins, that give new life to a new ecosystem of plants, animals, and insects inhabiting the crumbling prangs and vandalized buddhist statues.  Despite its eroded state, the past splendor remains evident and its longevity to withstand attack, neglect (at one time), theft, and environmental conditions is beyond impressive. Detailed models of some of the palaces, wats, and other ancient buildings are found throughout the ancient city. 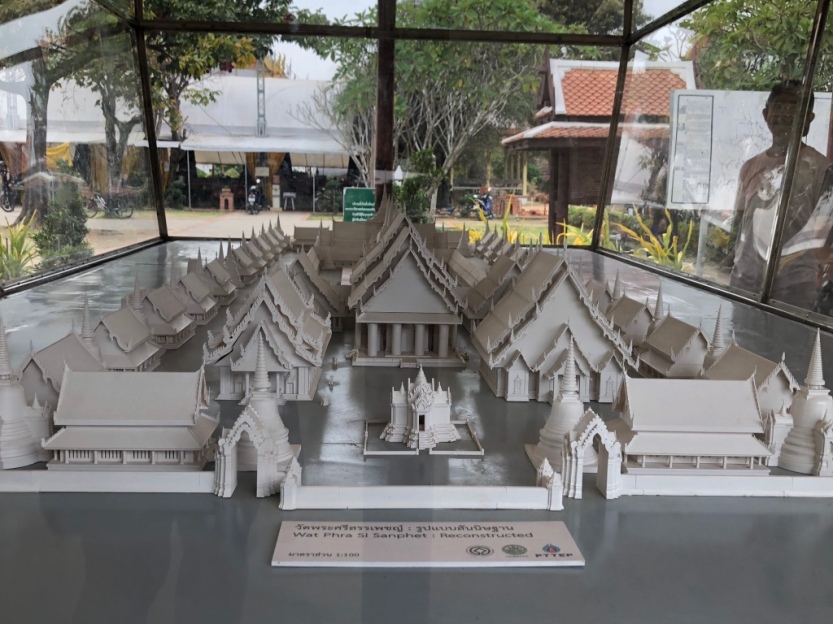 Ayutthaya is an island at the confluence of three rivers: the Chao Phraya River, the Lopburi River and the Pa Sak River. Small boats ferry visitors from the surrounding rice farming community to the island for the day. A popular way to explore Ayutthaya is by bicycle. We chose to do a small guided bicycle tour to learn a bit more about the history. However, you can rent bicycles and explore the island more freely or travel by foot if you have more time.  There appeared to be several tour bus options as well.

Prior to crossing the river, we were able to explore the surrounding community.  We road through endless rice fields and met some of the local adorable school children.  While they were anxious to practice their english with us, we wanted to learn Thai.  They chuckled as we struggled with simple tasks of the alphabet. 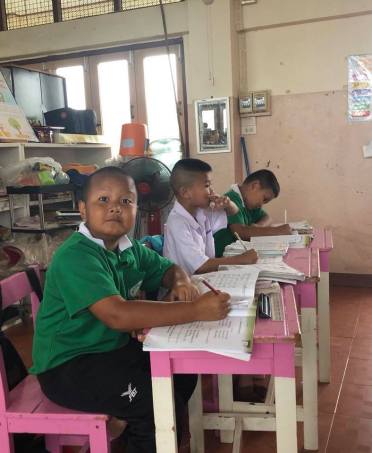 Once arriving on the island we visited Wat Suwannaram, one of the few renovated structures on the island. Inside is a towering gold Buddha statue surrounded by deep red walls and columns with intricate golden overlays.

In addition to this wat there are several modern structures hosting a museum, market, and eateries. However, most of the island remains a series of small ruins with both new and old Buddhist statues that surround the more well known, larger and better preserved prangs 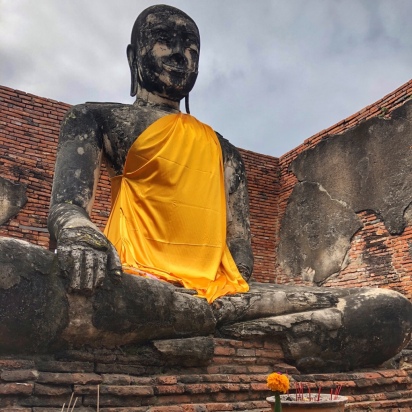 One of the most famous Buddhas on the island is found at Wat Lokayasutharam. Here you will find the oldest reclining Buddha in the world. Each position of the Buddha is representative of a day of the week. The reclining Buddha represents Tuesday, a position that allowed Buddha to tame an evil giant into obeisance.

A line of three impressive prangs stand nearby.  The prangs are known as Wat Phra Si Sanphet, which was the holiest temple on the site of the old Royal Palace. 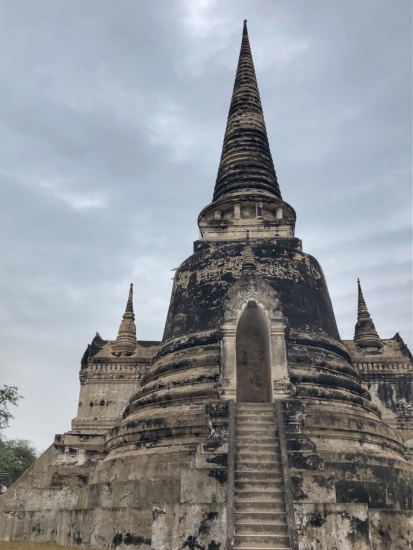 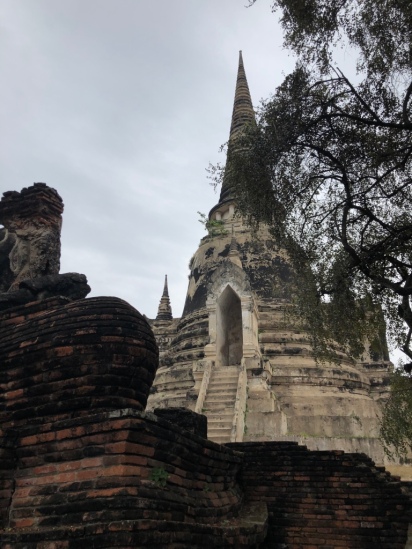 There are several signs indicating the Do’s and Don’ts.  Although not pictured in this sign, one is DO NOT climb on the prangs. Sadly nearly every tourist was climbing the steps for photos. 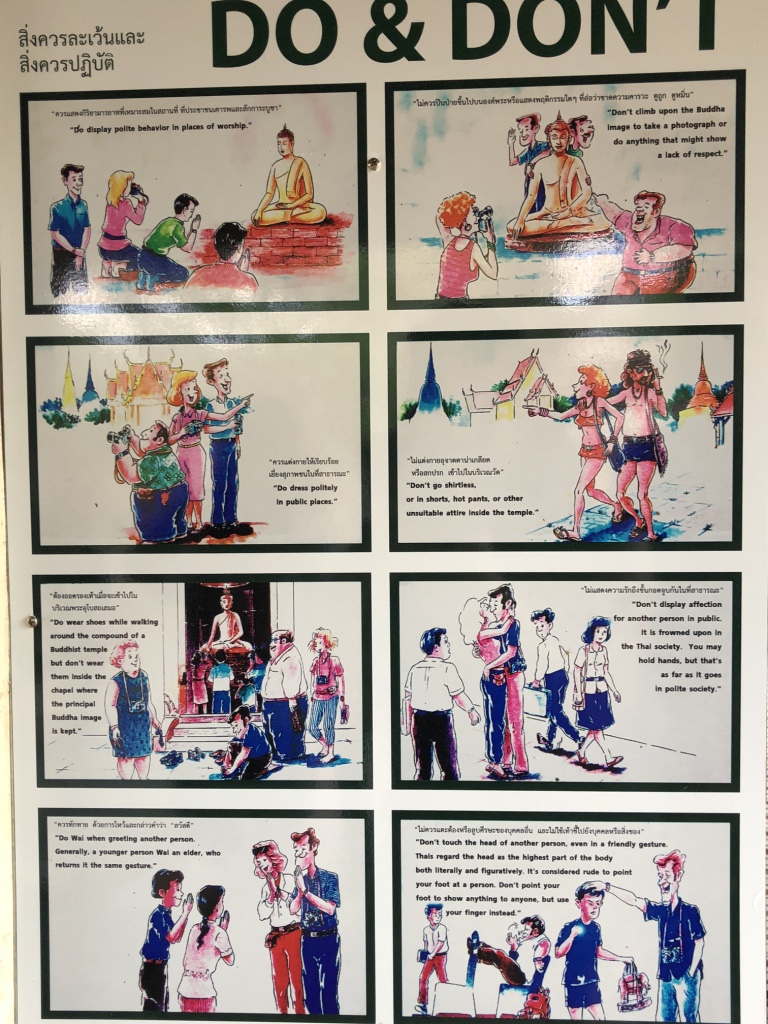 Wat Mahathat is probably the most impressive collection of ruins on the island. Here you can walk amongst an endless variety of prangs and Buddhas, including the Buddha head entwined within the roots of a tree, one of the most recognizable images from Thailand.

The theft and vandalism of ancient Buddha statues is endless here. Many of the heads of the statues were stolen and sold on the black market.

The history, the beauty, the longevity of Ayutthaya was the favorite part of our Bangkok visit. A day trip to this ancient kingdom should not be missed!