“Happiness does not depend on what you have or who you are. It solely relies on what you think” – Buddha

We had been dreaming of visiting Bhutan, the nation responsible for introducing Gross National Happiness for years, but the logistics of travel, the cost, and the guide requirements were always excuses to choose other destinations. This year was different and we had the trip of a lifetime, the type of travel you hope you return a better person than when you left.

This tiny landlocked nation in the eastern Himalayas is considered to be the last remaining Buddhist Kingdom in the world.  Its rugged landscape, border with the highly contentious Tibet, and closure to tourism until 1974 has isolated Bhutan from the rest of world for years.  Today tourism is growing as the country tries to raise revenue by promoting its unique culture and traditions to the outside world.  While tourism is now part of the culture of Bhutan, it is highly regulated. Visitors must be led by a guide from one of the country’s many licensed tourism operators, there is a minimum $250/day/person fee (this covers food, lodging, transportation and guide fees), and all flights into Bhutan must be booked on their national airline, Druk Air – Royal Bhutan Airlines.

We generally stay clear of any organized tourism unless it is a must to see a destination and well, it was in Bhutan so we had no choice. We were however, pleasantly surprised with the experience, which was far more intimate and less ‘touristy’ feeling. Tours are private with a guide and driver of a private car for each each party, which means that there isn’t large bus travel and no other people were dictating our itinerary. As the trip went on, it felt as though we visiting our friend Teshering (our guide) in Bhutan, rather than being on an organized tour. We booked a half cultural tour/half hiking tour over 10 days with the Bhutan Swallowtail Company.  Our journey would take us from Paro, along the Druk Path to the capital city of Thimphu.  It is important to do diligent research on tourism operators as many of them post fake reviews to inflate their ratings. Try to choose one that people review and write about outside google and trip advisor reviews.

Paro is a small village of 15,000 people that has a deep history and many sacred sites, including the well known Tiger’s Nest Monastery (Paro Taktsang).  The village, like most places in Bhutan has traditional architecture with multi-colored buildings, small arched windows, and paintings of animals, lotuses, and phallic symbols (more on this later).  Its residents also where traditional dress, Gho for men and Kira for women.  Traffic jams caused by mule herders are common.

It is also home to the country’s only international airport, so everyone arriving from abroad will make their way to this village. Flights to Paro on Drukair originate in only five major cities, Bangkok, Delhi, Katmandu, Singapore, and Dhaka, with stops in four rural areas in India. I was a bit apprehensive about flying a government run airline, but it was one of the best flying experience I have ever had. The plane was a bit old, but well taken care of and the food was amazing! The decision to build an airport in Paro was highly based on the width of the valley, which could accommodate a large aircraft…just barely though, landings and takeoffs were a little nerve wracking. Clearly security at the airport is a bit different than what we experience throughout the rest of the world.  I was able to take a picture on the tarmac!

Our first day in Paro was fairly low key.  We rested in our room at the Taktsang Boutique Resort & Spa, visited the buddhist fortresses and monasteries Rinpung Dzong and Kyichu Lhakhang, and tried our hand at archery, the national sport of Bhutan.

Exterior of the lodging

Rinpung Dzong is a 15th century monastery and fortress, built to protect the area from invaders from the north. The fortress sits high above the village offering sweeping views of the valley.  Inside the towering white washed walls and traditional Bhutanese wood carved roof and windows we learned about culturally important gods and iconography.  Our favorite, the Wheel of Life, tells the story of the six realms of life understood as forms of existence, or states of mind, into which beings are born according to their karma. 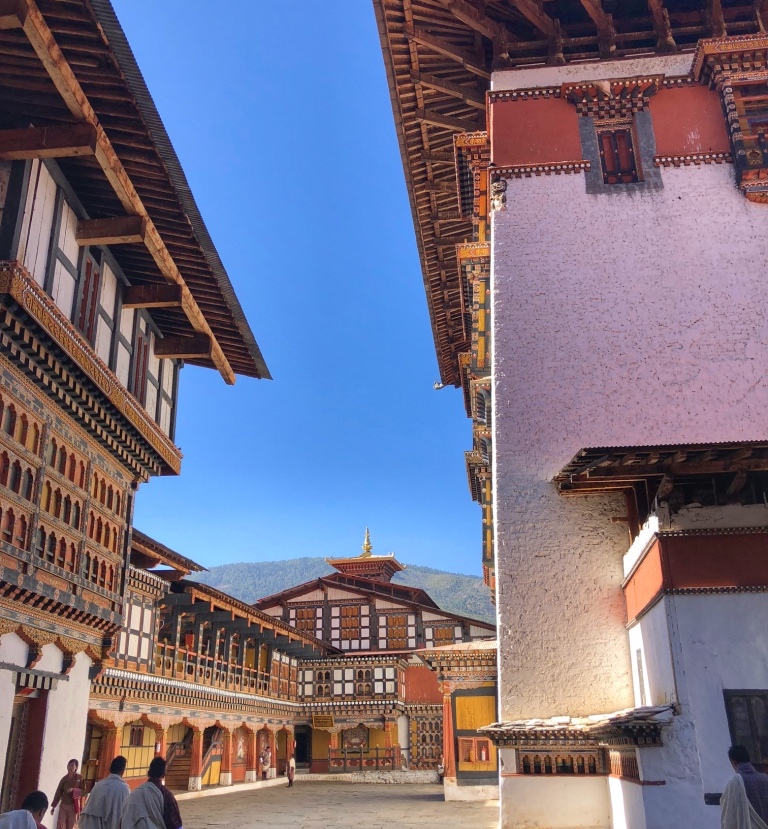 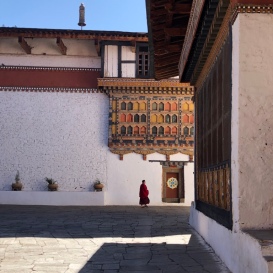 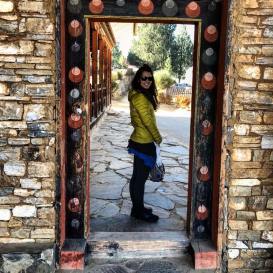 Kyichu Lhakhang, one of the four border taming temples, is one of the oldest buddhist temples built in the 7th century.  Sorry…no photos inside any of the temples in Bhutan.  This temple, like many others, is a sensory explosion of color, incense aromas, and soothing sounds of chanting and prayer.

Brian and I learned that archery really isn’t our game.  We lost and broke several arrows and I ended up with a bruise from the bow. We left it up to the professionals for the remainder of the trip. You can tell how good an archer is by the number of colorful ribbons hanging from their belt. As you can see, Brian and I are ribbonless. 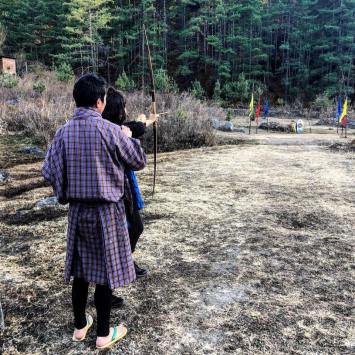 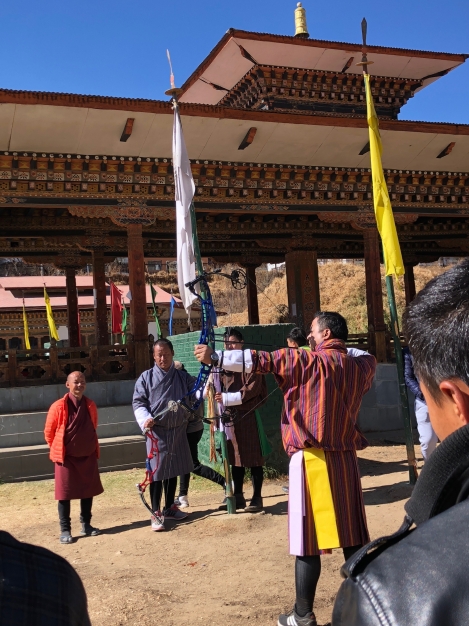 That evening we learned how to make the traditional Bhutanese chili and cheese dish.  This simple dish can be whipped up in a matter of minutes. Ingredients include chillies (red or green are acceptable), tomatoes, onion, garlic, and cheese. The Bhutanese have a strong love affair with chillies and they are a part of every meal in Bhutan. Other common dishes include momos, imported beef (they don’t kill animals, but will eat those killed by others), and rice. I loved the spice and flavors of this food, but I was worried that I may have burned a hole through my stomach by the end of the trip. 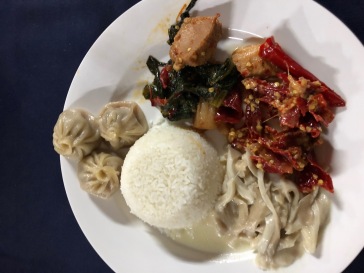 Hefty helping of chilies with momos

The following day we were off to the hike up to the sacred Tiger’s Nest Monastery. This journey is a 4 mile round trip trek with an elevation gain of 1,700 feet to an elevation of 10,232 feet. The path can be crowded near the base, but if you are a swift hiker you can leave the tourists with inappropriate footwear or those riding mules to the halfway point behind while still traveling at a speed that allows one to take in the beautiful landscape and views as the trail passes prayer wheels and stupas, through an endless maze of prayers flags.

Not far before reaching the monastery there is an overlook that offers the iconic view you see in the photographs. It is so incredible to see this beautiful structure clinging to the cliffside nearly 3000 feet above the ground. Tiger’s Nest was constructed in 1692 around a cave where Guru Rinpoche first meditated in order to tame the tiger demon. There is a legend that the guru was carried from Tibet to this location on the back of a tigress, thus giving it the name “Tiger’s Nest.”

The remaining hike to the monastery requires a bit more care, over carved rock steps and slick walkway bridges.  Again, no pictures allowed inside so you will just have to take my word for it…it is one of the most beautiful places and moving experiences of my life.

Upon our return, we enjoyed a massage and a hot stone bath. These baths have medicinal value in Bhutan and are said to cure many ailments. The bath is made from simple wood and the water and stones are taken from a nearby river.  The stones are heated over a large open fire and then put into the tub to heat it.  Fresh herbs are added, which kind of make you feel as though you are being cooked in a soup.  These baths are HOT, yet so soothing.  I wish we could have had a hot stone bath everyday!  The next day we were off on our trekking adventure along the Druk Path.

I am an expat from the United States living in Wellington, New Zealand. My love affair with landscape, culture, and learning has led to a life filled with travel and academic institutions. Endowed with endless curiosity, I spend a great deal of time philosophizing about anything and everything, but very often pertaining to environmental issues. I should note that I am not formally trained in environmental philosophy, nor do I have the vocabulary competency to pass for someone who has. My writing is a somewhat tongue and cheek.