“It is good to have an end to journey toward, but it is the journey that matters in the end” – Ernest Hemingway

Our final days in Bhutan were spent in the capital city Thimphu.  This city, home to both the democratic government and monarchy, is Bhutan’s largest with just over 100,000 residents. The city is the nation’s economic center, a hub for agriculture, art, culture, and education. It is far more westernized than the rest of the country. While many still wear traditional Bhutanese dress, the younger generation is touting styles typical of the US.

You will find a traditional boot shop next door to another selling Air Jordans.

We spent three nights at the Hotel Thimphu Towers, located on the edge of the clock tower square. Despite the clock no longer working, this square is popular, dominated by stray dogs in the morning and teenagers in the evening. 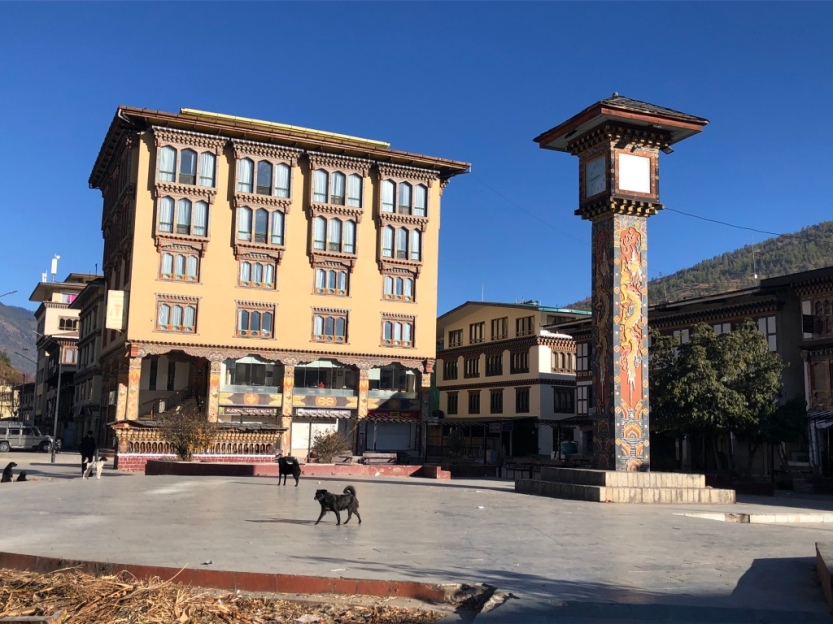 The cultural sites were vast.  We visited several important monasteries, stupas, government buildings as well as artist and craftsmen studios and the famous Great Buddha Dordenma Statue.  This statue was constructed to celebrate the anniversary of Bhutan’s fourth king and fulfills prophesies (one dating back to the 8th century) that suggested it would built in the region to bestow blessings, peace and happiness on the whole world.  It sits prominently on a hill that can be seen from nearly every location within the valley.

It is a bit of a climb to the Buddha on some unfinished steps (the site is still under construction). When you reach the statue you will be surrounded by beautiful golden statues holding sashes of the prayer flag colors as you look out to views across the valley. 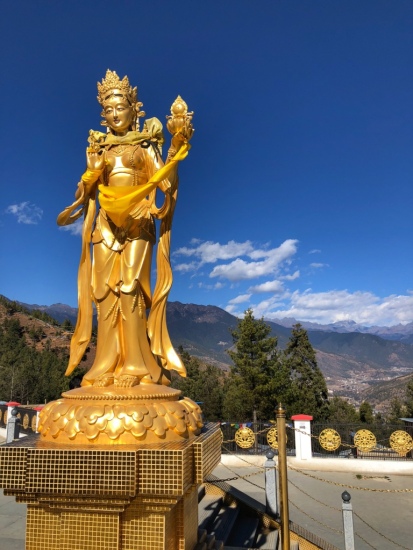 Tashichho Dzong, which houses local government officials is located along the banks of the Raidāk River valley.  The architecture is typical to other dzongs, but the scale is much larger. Major Bhutanese festivals are held within the courtyard of this dzong and on days when these buildings are open to the public, the line for entry extend beyond what the eye can see. 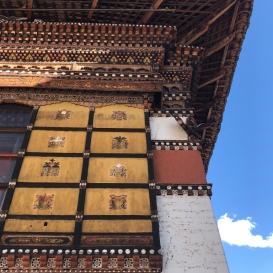 Democracy is new to Bhutan, in 2008 the nation became the world’s youngest democracy with their first election. While one would think this is celebrated by the Bhutanese, many would prefer the monarchy.  People have always adored their kings and they feel that politics have divided a once united community…sounds familiar huh?

Thimphu Chorten is a highly trafficked stupa located in the central part of the city. Unlike most stupas, this whitewashed chorten, with its sun-catching golden finial does not house ashes of the dead. Inside you will find richly carved annexes facing the four directions, mandalas, statues and a shrine dedicated to the third king. As always, no pictures allowed.

The stupa is surrounded by large prayer wheels and elderly people completing their lengthy daily devotions. It is customary to circumambulate the stupa clockwise three times before leaving the site. 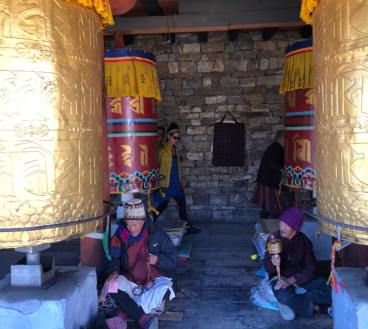 The city is filled with talented craftsmen and artists.  Many of their goods can be purchased at less cost than tourist shops at the local market. The market was set up by the government to support artisans in rural districts.  In addition to the markets we visited a weaving facility, a paper factory, and several artist studios.

I bought a beautiful Kira that I obviously was not wearing properly…hooks on the left only.  Thankfully this local women was there to help me before I got too far from my hotel. 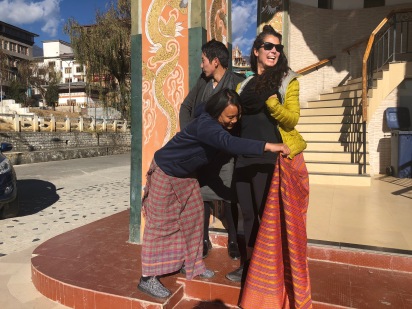 During our trip to Jungshi, we were able to follow the entire process of handmade paper making…such a delicate and graceful art.

Soaking and heating the fibers

Many of the art studios we visited contained traditional paintings with yigzo (bhutanese calligraphy).  Our favorite studio was that of Salil Bishwa, an artists first trained in traditional art, but was now developing his own style of more abstract works.  Below (right) is one of his water colors. If you only have time to see one artist at work, I highly recommend a trip to his studio, Bhutan House, just steps away from the paper factory.

There was one oddity amongst the art, the obsession with phallic symbols. Symbols of an erect penis are intended to drive away the evil eye and malicious gossip are commonly painted on homes and the subject of sculpture and wood carving. 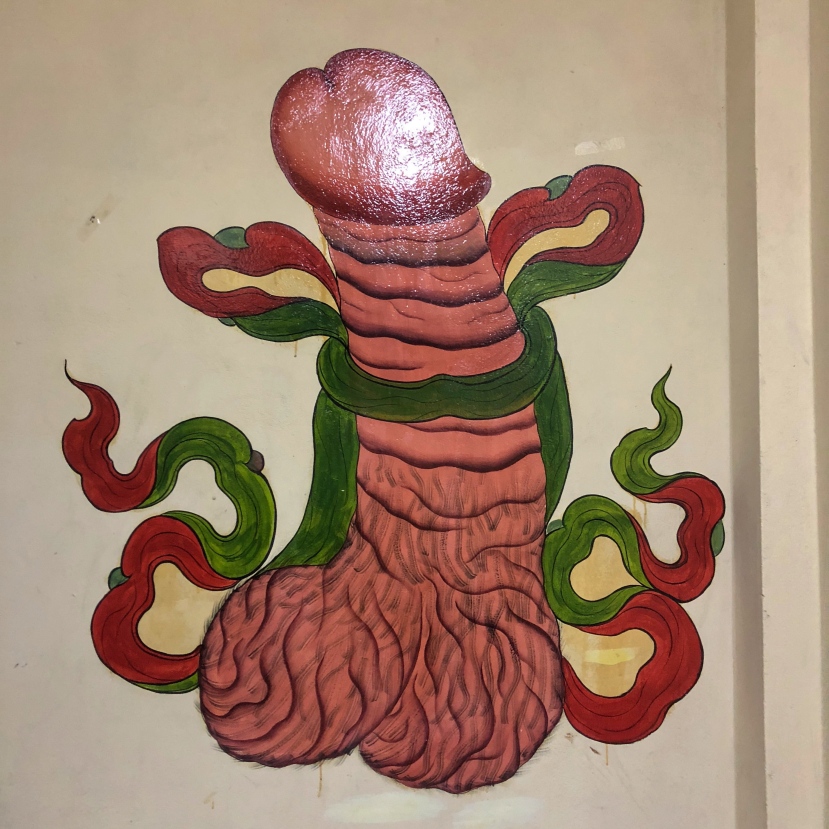 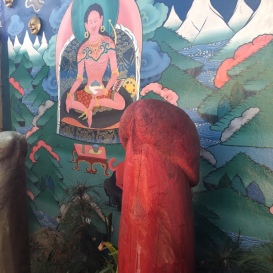 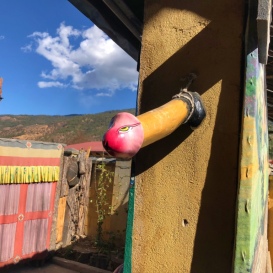 We often ventured off on our own in the middle of the afternoon, exploring the city streets, food markets, and local bars for a brew and momo snack. During our search for a place that was a typical representation of a local bar, we stumbled upon this gem, Typical Bhutanese Restaurant and Bar.

Other bars we visited to check out the local music scene and of course hang out with dogs.

The city streets were filled with markets of endless chillies and street art tucked away in allies. Pictures of the king are common on and inside many buildings. The white scarf below the picture indicates that the king is still living, while the scarf above means he has passed. 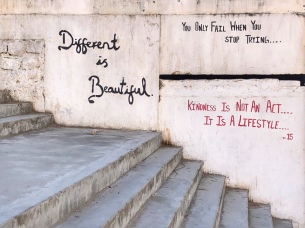 There are no stop lights in Bhutan. A traffic cop directs traffic at the busiest intersection, while crossing signs are posted at minor intersections. I just love that the traditional dress is captured in a street sign. 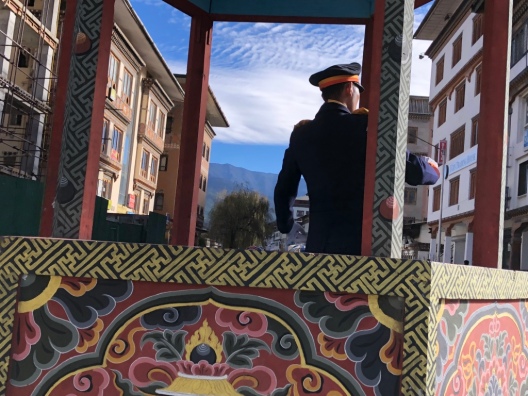 One last hike through prayer flags rounded off our journey to the capital city.  I have absolutely no recollection about where this was located, but the density of flags and winds gusting down the hillside, made this hike a sensory overload of health and longevity (blue), purification of karma (white), wish fulfillment (red), compassion (green), and yellow (overcoming obstacles). 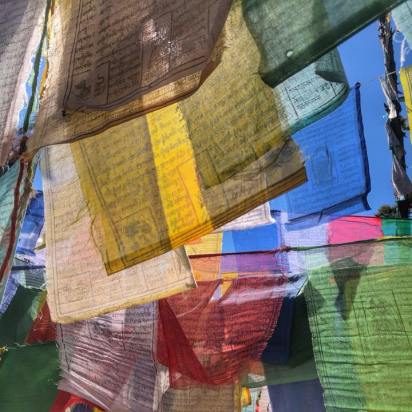 Our trip to Bhutan filled us with so much gratitude.  It reminded us what truly is important in life and we feel such great privilege for the opportunity to explore a tiny sliver of this beautiful nation. We were greeted with happiness and friendliness and admired this tiny nation for its big goals. The Kingdom of Bhutan, values humanity over money and understands that care of its people and the environment will bring long term health, prosperity, and well being to its people. While they struggle to maintain healthy water quality and manage their waste they have goals of zero waste by 2020 and 100% organic agriculture.