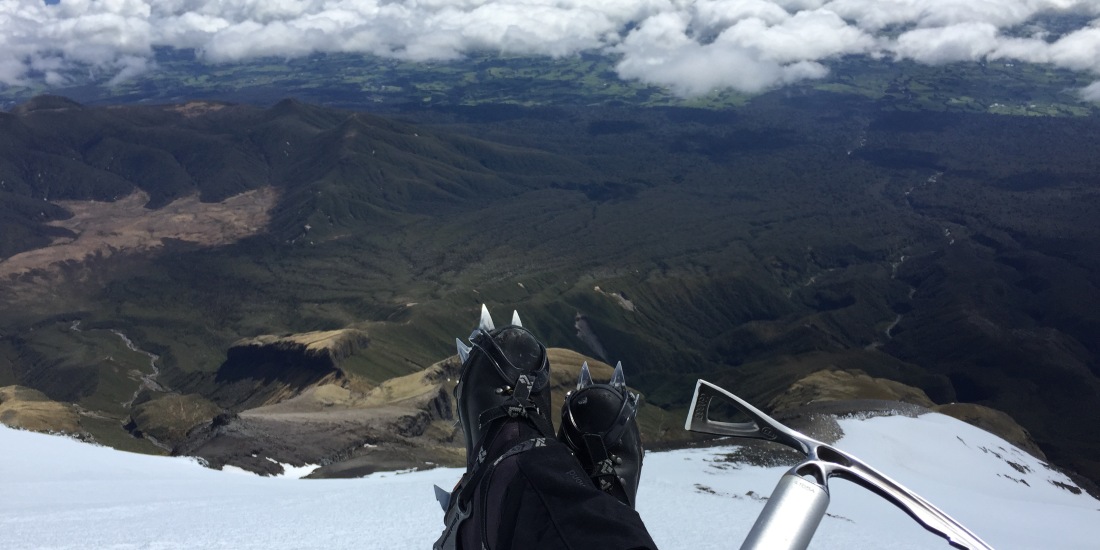 Taranaki is a rural region along the central west coast of Te Ika a Maui North Island.  The area is known for its energy and dairy production, surf breaks, and the perfect concentric volcanic cone of Mount Taranaki. Taranaki forms that large bulge you might notice on the map, it is somewhat remote and has long been off the tourist track, brining about the saying most travelers who reach Taranaki have taken a wrong turn. Oddly, I spent the first weekend after moving to Aotearoa New Zealand in Taranaki, have returned since, and would have loved to make a trip there this past winter had it not been for the relentless rain that battered the region.

The lone volcano, Mount Taranaki that rises from a generally flat pastural topography is the distinctive symbol of the region. The name means ‘shining peak’ in te reo Māori (tara = mountain peak, naki (ngaki) = shining).  The mountain and the six mile circular radius around it is the second national park designated in Aotearoa New Zealand. Satellite images show the stark contrast between the two distinctive land uses.

According to Māori legend, Mount Taranaki has a sad history of betrayal.  He was once married to Ruapehu (Tongariro National Park).  One day he went hunting only to return to find that Ruapehu had been wooed by Tongariro.  He battled Tongariro for his love but eventually retreated west, carving out the Whanganui River along his journey. As he sits facing his love and rival, it is said that when the mist drifts eastward exposing Taranaki it is him expressing his love for Ruapehu.

The first time we visited the region we enjoyed a quiet and lazy weekend along the surf highway. We rented a small bach, enjoyed walks along the surf watching surfers, whitebaiters, and sunsets, trips to nearby iconic beaches, and views of the the mountain from the rear window of our rental.  I was still recovering from hip surgery so the trip up Mount Taranaki would have to wait.

New Plymouth is the largest town in the region with 74,000 people.  The town is known for it walkabilty and cycling safety, rarities especially in small towns in NZ. We didn’t spend much time in the downtown area, but instead checked out the beach for views of Sugar Loaf Islands and Paritutu Rock.  Paritutu Rock is the distinctive rock that rises from the coastal edge, separating Ngamotu Beach and Back Beach.  Climb the many stairs to the top of this rock for excellent views from above or just enjoy watching the surfers from the beach below.  I especially loved the rocks covered in mossy seaweed. 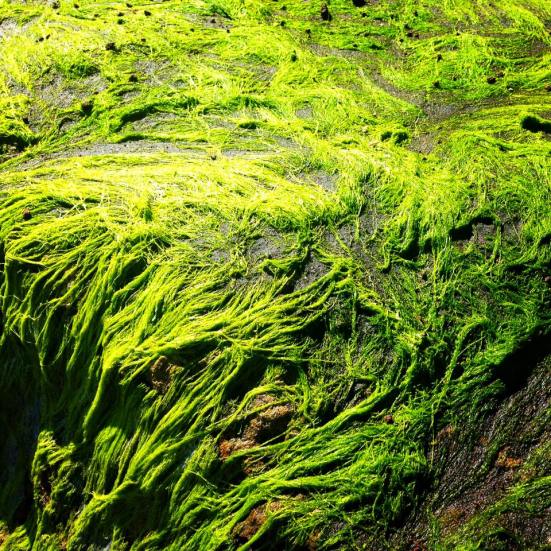 While this beach was lovely, we were far more interested in checking out the beach that is home to the Three Sisters and Elephant Rock.  This beach is located in the far north of the region near Tongaporutu.  It is a bit of a drive and takes some planning to time your visit with low tide, but it is worth it.  We aren’t great planners so we arrived just as the tide was rolling out. The beach was still accessible, but we had to get our feet wet on the walk out.  The vibrant green colors on the rocks and pools of water clearly mark the tidal areas. There were plenty of little caves with fern entrances and rock arches to explore on the walk out to the beach. 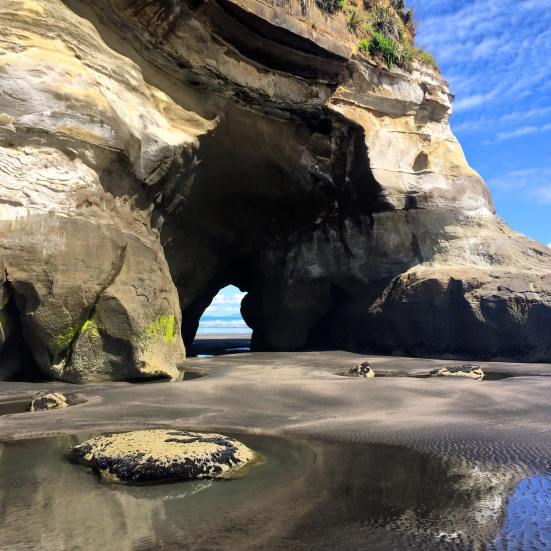 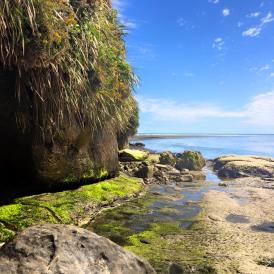 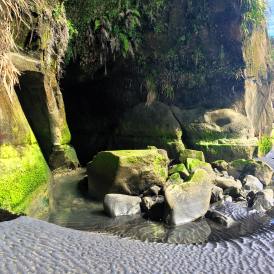 The Three Sisters are narrow 25 meter high rock spires that project from a tidal beach. Sadly only two sisters remain today, the other was swept out to sea years ago.

Elephant Rock is just beyond the sisters. We were lucky to find the rock still in tact as its trunk recently collapsed during the Kaikoura Earthquake in November 2016. It doesn’t take much of an imagination to see the elephant shape in the rock.

On our way back from the bach, we stumbled upon Mike’s Organic Brewery. The brewery was family owned and run by three generations of men named Mike.  The beer was great and one of their yummy pizza’s was a perfect compliment that is best enjoyed in their outdoor dining area. 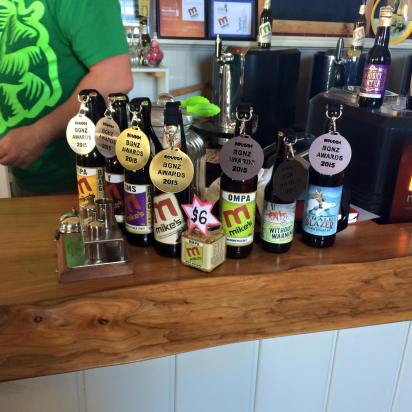 We returned to the region, nearly a month later to climb Mount Taranaki.  Standing 2,518m (8,261 ft), this stratovolcano is one of the deadliest peaks in Aotearoa New Zealand, with more than 80 people dying since records began in the 1890’s. The peak’s solitary and coastal location makes it susceptible to unpredictable weather patterns that leave its steep slopes iced over. While it can be challenge to climb to the top, the descent is where many of the accidents happen. Without proper self arrest skills, some have slid to their deaths to a cliff area known as the body catcher.  One of the most recent tragedies claimed two young lives on an Auckland Mountaineering Club climb in 2013. 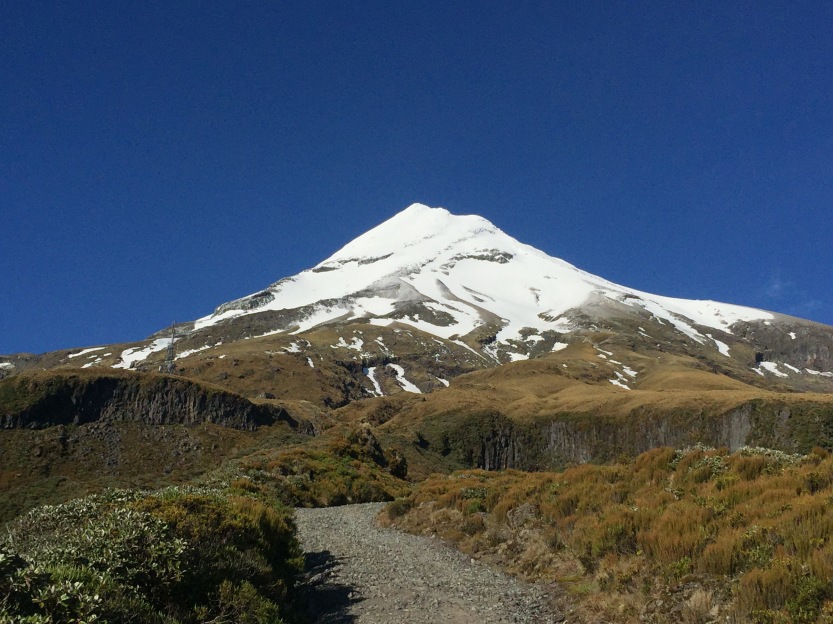 While we had plenty of experience climbing much higher peaks in the snow, we were novices on crampons so we took our climb quite seriously.  We chose the easiest northern route and a weekend with an excellent weather forecast. Nearly 2/3rds of the climb that begins at the visitors center requires nothing more than a pair of hiking boots, walking along wide gravel trails through alpine vegetation. When we reached steeper areas with step access, there were patches of snow that had yet to melt in early November. 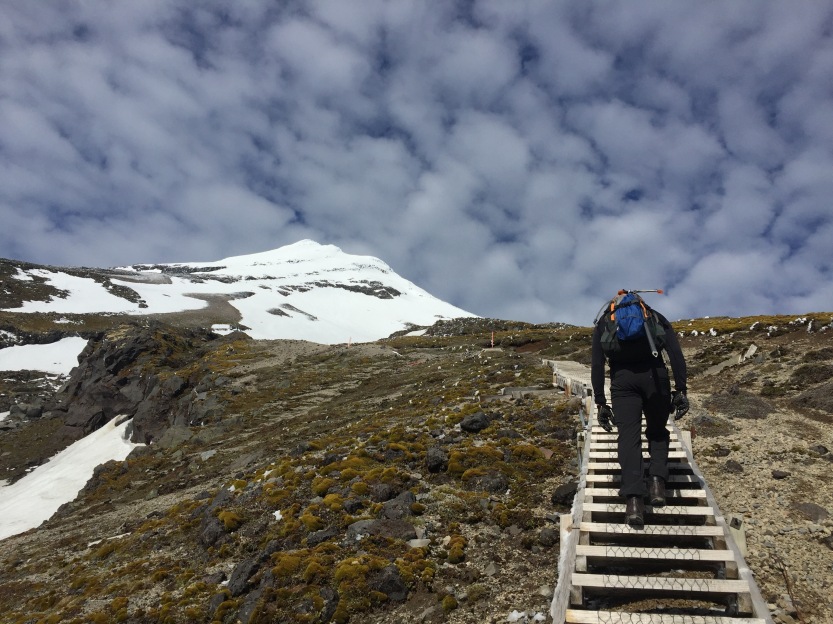 Not long after the steps, we found ourselves on a solid sheet of ice. Evidence of the dangerous wind were apparent from the ice patterns on rocks and track posts. 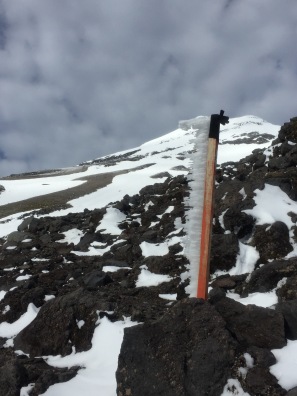 It was time for our crampons and a climb above the clouds.  It was my first time on a coastal mountain, such a completely different experience to be climbing a cone with no other mountains and snow anywhere nearby. I imagined that there were probably heaps of surfers on the swells just below. It was such a different experience from the endless Rocky Mountain slopes I knew from home. 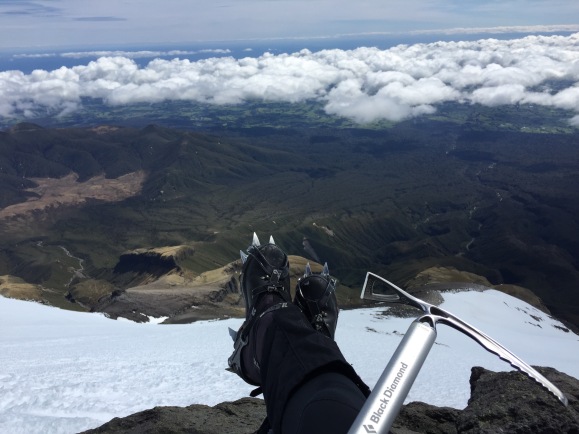 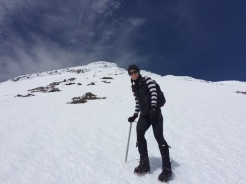 The climb to the top was fairly easy, even people carrying skis on their back nearly reached the summit. With all of the ice, I wondered if skiing would even be fun here, maybe ice skates would be a more appropriate choice.

Firmly aware that most mountaineering accidents occur on the descent and our self arresting skills (while mine at least) were not that good, we took our time traveling down. There were moments that certainly made me uneasy, slowing me to a pace that made me wonder if I would ever reach gentler slopes. 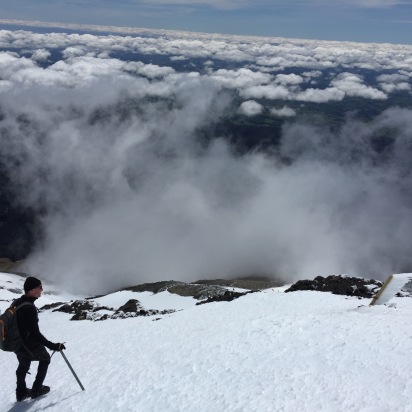 A climb and descent of the mountain, even in fine weather is something to be taken very seriously.  Even with years of mountain experience, this peak required some of the most concentration and patience I have ever needed.  I can certainly understand how accidents happen here. The sheer slopes of the mountain are deceiving on the climb and not truly recognized until the descent. The white stuff isn’t snow, it is ice and when you are small like me, it requires some effort to get your crampons to sink in deeply.  The route at some point becomes unmarked, so without doing your homework before a climb, you could easily find yourself in a pickle. However, even with its dangerous history, the allure of the peak remains.  Will we climb it again….yeah nah yeah.

I am an expat from the United States living in Wellington, New Zealand. My love affair with landscape, culture, and learning has led to a life filled with travel and academic institutions. Endowed with endless curiosity, I spend a great deal of time philosophizing about anything and everything, but very often pertaining to environmental issues. I should note that I am not formally trained in environmental philosophy, nor do I have the vocabulary competency to pass for someone who has. My writing is a somewhat tongue and cheek.