The East Cape was the last of the 16 regions in Aotearoa New Zealand we had left to explore. This 334 km trip along State Highway 35 from Gisborne and Opotiki is remote and off of the tourist track.  I have met very few Kiwis that have even made the journey here. Life on the tight knit cape is quiet and slow paced.  It is the ‘Cheers’ of NZ, where everybody knows your name. Our three day road trip was loaded with beautiful sand beaches, massive pōhutukawa trees, and Māori culture, making it one of our favorites.

Like any long weekend road trip, we are forced to rush through, simply getting a flavor of place to determine where we would like to focus our return trip.  This trip was no exception.  We left midday on a Friday, stopping in Napier (technically not part of the cape) for the evening. Napier is known for its well preserved 1930’s art deco architecture, wineries, and its sunny and warm weather.  People rave about this place, but Brian and I aren’t really big fans. We usually only head here when the weather is crap everywhere else.

We were campervanning this trip, driving in a Jucy, which screams foreign tourist.  We generally try to stay clear of the big tourist campervan outfits when we can, but honestly the Jucy vans are pretty awesome.  They are comfy and stocked with everything you would ever need. 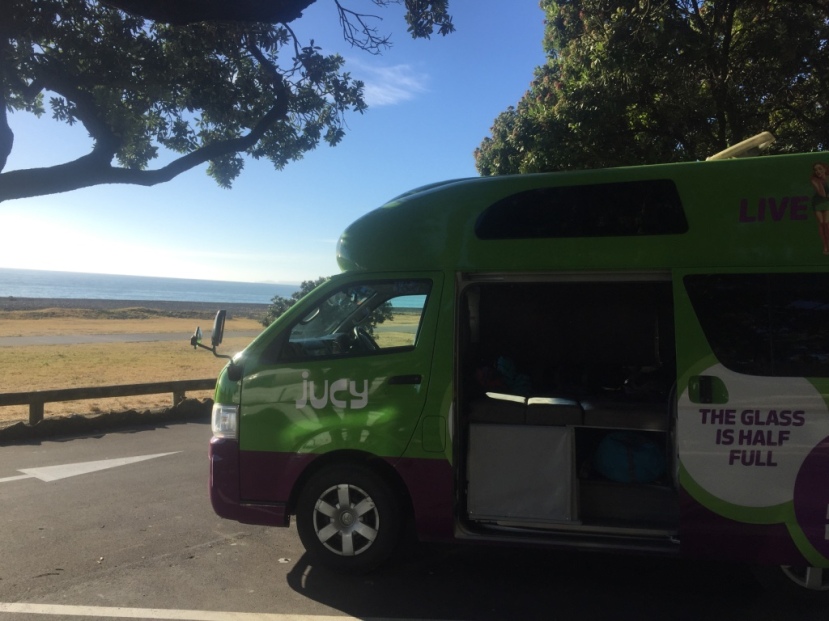 After the sunrise and a sun filled beachside breakfast at the container Magnet Cafe, we were off to Gisborne (‘Gizzy’) for a mega day of driving and exploring. 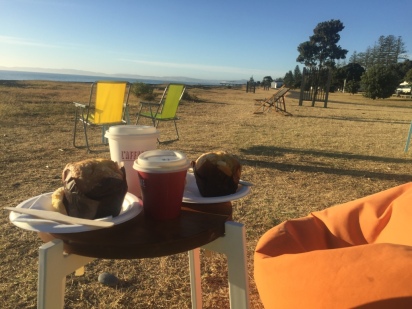 Titirangi (Kaiti) Hill in Gisborne is the first point of arrival for Māori in the area.  In addition to its Māori history, Gisborne is known as the Chardonnay and for being the surf capital of NZ (the later is challenged by residents of Raglan on the west coast).  Check out Te Poho O Rawiri Marae, one of the largest Māori maraes (meetinghouses) in NZ, nearby Te Tapuwae o Rongokako Marine Reserve, stock up on food and DEFINITELY fill up the gas tank.  There are no working stations between Gisborne and Opotiki.  We were running on fumes by the end of our trip.

Driving north, there are a series of remains of crumbling massive piers, the first being Tolaga Bay.  This pier was built in 1929 and served as the place for trade before roads were sealed in this area.  Wool and meat were traded in exchange for petrol, beer, and general merchandise here.  You can still see the old cart lines along this 660 meter long pier.  Today, it is a popular fishing destination. Climb the nearby Cooks Cove walkway for overhead views of the pier. 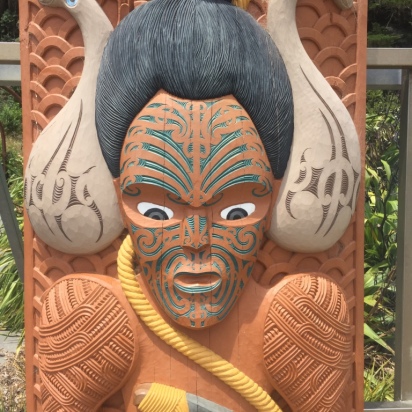 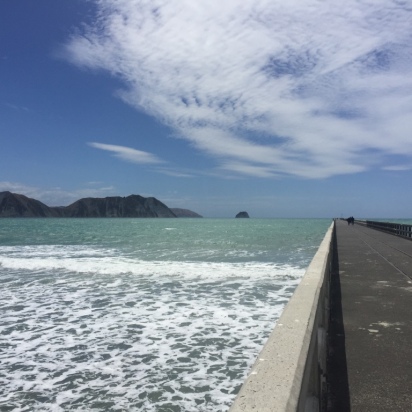 Our next stop was Anaura Bay, a largely unsettled scenic reserve where Captain James Cook first met local Māori in 1769.  The beautiful white sandy beach is surrounded by puriri trees that attract heaps of native birdlife that can be heard above the sound of crashing waves.  Motuoroi Island, the small island in the bay was once inhabited by skilled greenstone carvers.  There is small pull off overlooking the reserve and island before heading down to the beach. 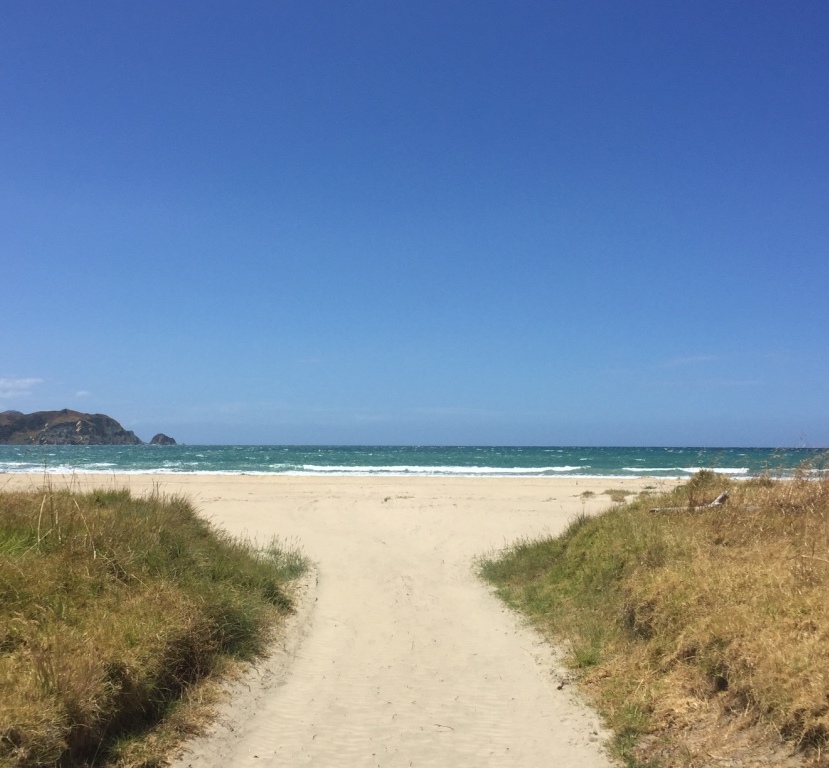 After some time spent on the beach playing in the surf, a great place to refuel with food and drink is Te Puka Tavern on Tokomaru Bay.  Two hapū or sub-tribes Te Whanau a Ruataupare and Te Whanau a Te Ao Tawarirangi reside along this bay.  The pub, which was established way back in 1873, is great place to meet locals and sample fresh seafood.  We tried the ‘cold beer’ special. 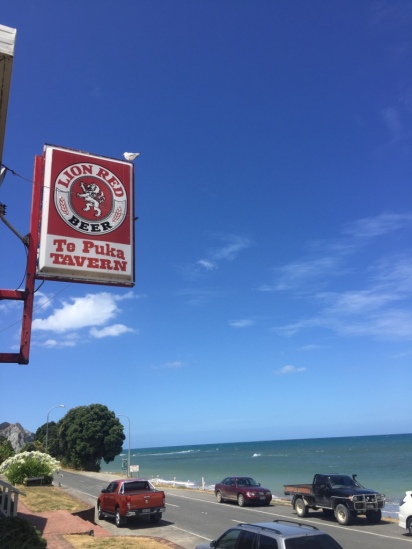 This bay is well sheltered and home to a year long fishing tournament.  Apparently Hapuka and Blue Nose are typical catches.

After lunch we made a brief stop at Saint Mary’s Church in Tikitiki.  This extraordinary church built as a memorial to soldiers of Ngati Porou,  is considered one the finest Māori churches in NZ.  The outside of the church is typical European construction, while the inside is extensively carved and decorated with tukutuku (woven panels), traditional to Māori culture.

At the road junction leading to the end of the cape, we stopped in the tiny coastal settlement of Te Araroa to see Te Waha-o-Rerekohu, Aotearoa NZ’s oldest and largest pōhutukawa tree. This monster tree is 600 years old and it is so big I needed to take a pano to capture its entirety.  This must be quite the site when the tree fills crimson blooms in December.

Walk among the crazy curling branches that hover close to the ground. 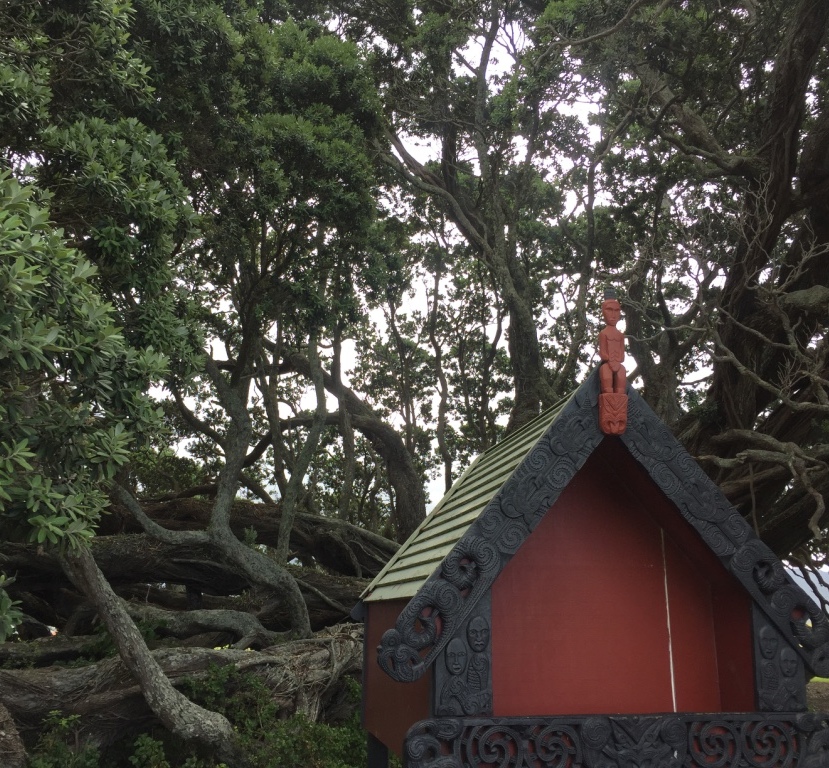 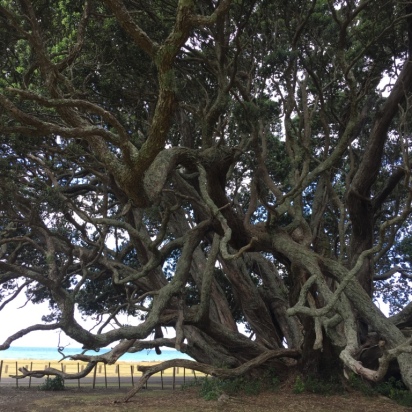 Departing from highway 35, we headed east along an unsealed road to the East Cape Lighthouse.  While the road is in fairly good condition, it winds dangerously along a significantly eroded coastline. I wonder how many years this part of the cape will be accessible.  Along the way, we came across some interesting uplifted rock formations that are exposed at low tides. 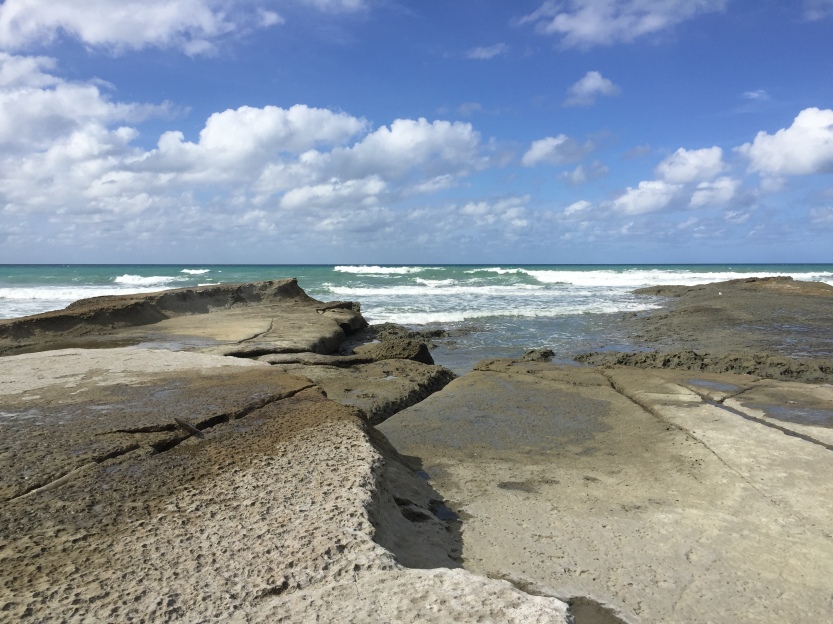 Eventually we reached the historic East Cape Lighthouse on Otiki Hill.  This light house was once built on a distant island, but was later moved to the shore.  Only 800 steps stood between us and the lighthouse.  The climb isn’t as bad as it sounds.  In fact I wouldn’t classify many of these as a step. 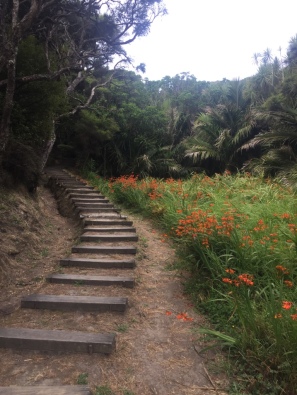 The stout white lighthouse is like most others in Aotearoa New Zealand, but the views across the undeveloped rural landscape and the Pacific Ocean are unique to the East Cape.  This area is the eastern most point in NZ and a popular place to watch the sunrise where you can be one of the first in the world to see it surface from the horizon.  We had planned to come back early the next morning, but the weather would tell us otherwise. 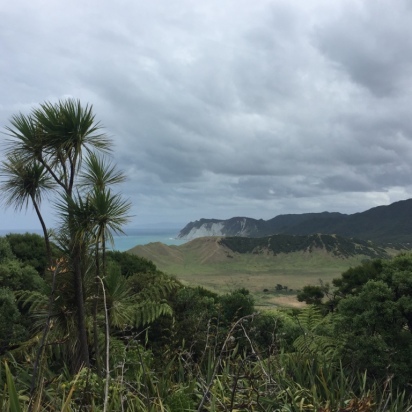 We camped not far from the lighthouse at the only campsite on the cape.  This is a large coastal campsite near an estuary surrounded by a rural landscape where we enjoyed the site all to ourselves.  It was a lovely evening here, cooking dinner and sleeping with the door open, filling the camper with sea breezes.

We were awaken by some seriously hard rain. The major storm effecting the entire country (that happens a lot in NZ) had caught up to us and the remote East Cape was not the best place to be during this storm, so we headed west along treacherous roads with downed trees everywhere.  Even worse, the only potential place to refuel at Waihau Bay (made famous by the movie Boy) wasn’t working.  We were driving on fumes all the way to Opotiki in the Bay of Plenty and made it, just barely 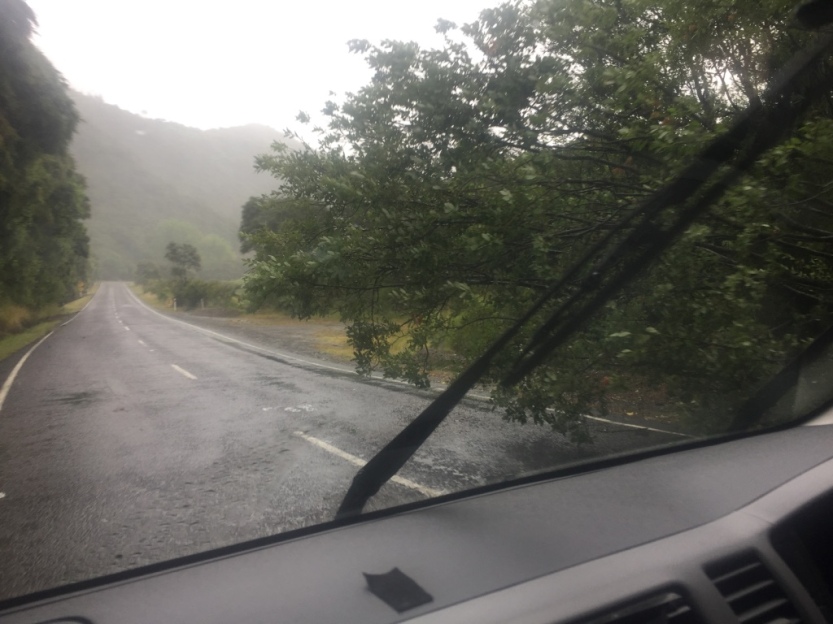 While we found sun in Opotiki, we also returned to a far more settled area. For a bit more about this little beach community, see my post about White Island.  Had it not been for the weather, we would have spent another long day in the Gisborne Region.  This region captures the essence of rural Te Ika a Maui north island. Here, the Māori culture that has managed to remain where iwi live a life of self determination, based on their values, culture, structure, and traditions.