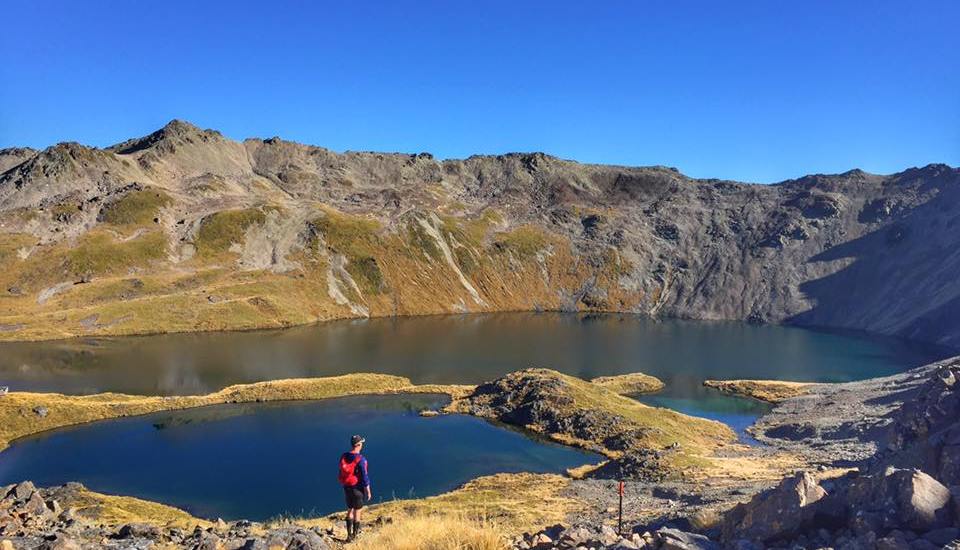 We had first planned to check out Nelson Lakes National Park during our 2015 Christmas Campervan trip, but ended up bypassing it because we needed a little R&R type destination to finish our 16 day journey.  Had I known how special this place was, I wouldn’t have waited nearly 18 more months to make the trip here.

Nelson Lakes National Park is a 102,000 hectare park in the northernmost Southern Alps. It is located in the north-central area of Te Wai Pounamu south island near the tiny town of St Arnaud.  The park is known for its many lakes, beech forest, craggy mountains, and sandflies (nasty little buggers).  Two large lakes, Lake Rotoiti (little lake) and Lake Rotoroa (long lake) are located at the base of the park and reachable by car.  Some serious hiking is involved to reach the rest of the park.

The large lakes were formed during the last Ice Age when massive glaciers gouged out troughs that were eventually filled with water.  The legend tells a story of an explorer named Rākaihautū carving out the lakes with his ko (digging stick) to fill them with water and kai (food) such as eels, freshwater mussels, and waterfowl.  Today the lakes are anpopular fishing destination, but the eels are protected.  Walk to the edge of the dock to watch these beauties gracefully swim by.  They are HUGE and some are over 100 years old!

Day 1 – Chilling at the Lakes

We arrived in St Arnaud during the middle of the afternoon.  It was too late for a massive trail run so we explored some of the lakeside paths and checked in at the visitor center for advice about our run the next day.  The tracks in Nelson Lakes are far more rugged than the Great Walks in other national parks, so a trip to the visitor center to chat with a ranger is always a good idea here. This is especially important in the winter months as the area is prone to massive avalanches.

After watching the sunset fill the clouds with color, the temperatures dropped quickly and my bare ankles (bonehead move) were sufficiently eaten by sandflies we checked into our B&B. 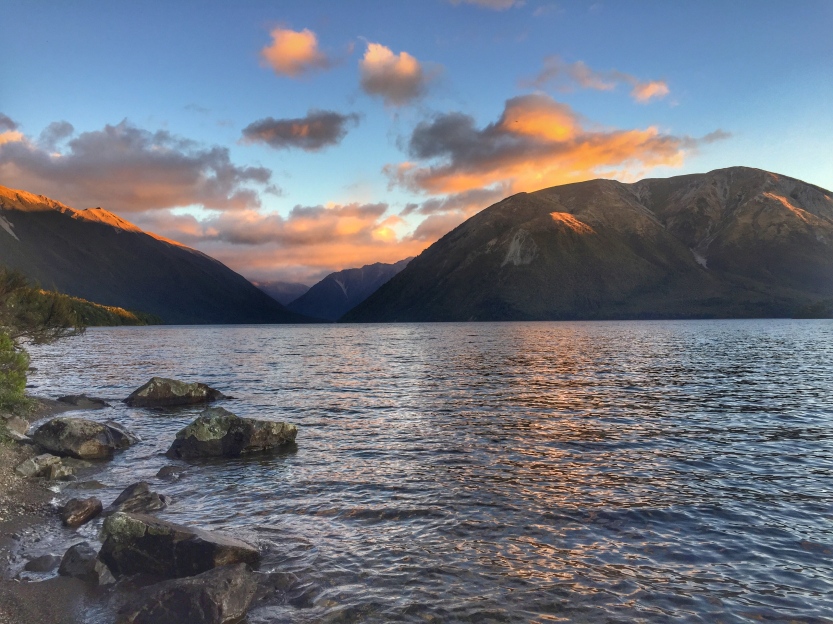 Although there are several lakeside campsites, neither of us are big fans of early sunset camping unless it is in remote locations.  So we decided to stay at the St Arnaud House, a little two bedroom B&B that is a quick walk from the lake.  Our hosts Russ and Marge and there two little Burmese cats, Pug and Chilli are excellent hosts.  We enjoyed conversations by the warm fire and over yummy breakfasts.  The cats are super cuddly and love to hitch a ride on your shoulder.

Today was our big trail running day.  We had planned to run a 25 km loop from the Mt Robert Car Park up the Robert Ridge Track to the Angelus Hut and down the Speargrass Trail, returning to the carpark.

The Robert Ridge Track begins with a big butt burning climb.  This is my favorite way to start a run and my Brian’s least. He managed just fine though. We were out of the beech forest into the alpine tussocks in no time. Check out the profile below.

The track eventually levels out for some beautiful ridge running.  The rocky trail reminded us of our home in Colorado. It was scree city and it slowed us down at times, as we were out of practice running rock lines. The views from the ridgeline were absolutely stunning, showing off the alpine lakes and mountaintops extending to infinity.

The ridgeline is extremely windy and prone to early season snow, often forcing people to make this climb to the Angelus Hut from the Speargrass Trail.  We however, had an unseasonably calm and hot late autumn day.  We did see a pair of hikers on the ridgeline bundled up, but being the heat box that I am, I was roasting in my sports bra most of the day.

After about 12.5 km the track descends down to the 28 bunk Angelus Hut, an absolute stunner! Per usual I was distracted by landscape and neglected to take a picture of the hut, but if you look closely you can find it on the left edge of the picture below.  It is pretty tiny in comparison to surrounding landscape.

Below is the view of the lake from the deck of the hut.  It was so still and clear, with a thin layer of ice around the edge.

To return to the Speargrass Trail there is a short, but steep climb from hut. We took one last look at these beauty blue alpine lakes.  The picture doesn’t capture just how gorgeous this basin truly it.  It is a special place for sure and in May you can expect relatively few bunkmates.

We had a steep descent down the Speargrass Trail.  While I love the climbs, descents are not my thing.  Despite its beauty I was cursing this slick mud slide from the hut to the bush edge.

When I look back at pictures I try to tell myself it wasn’t so bad, but it was! 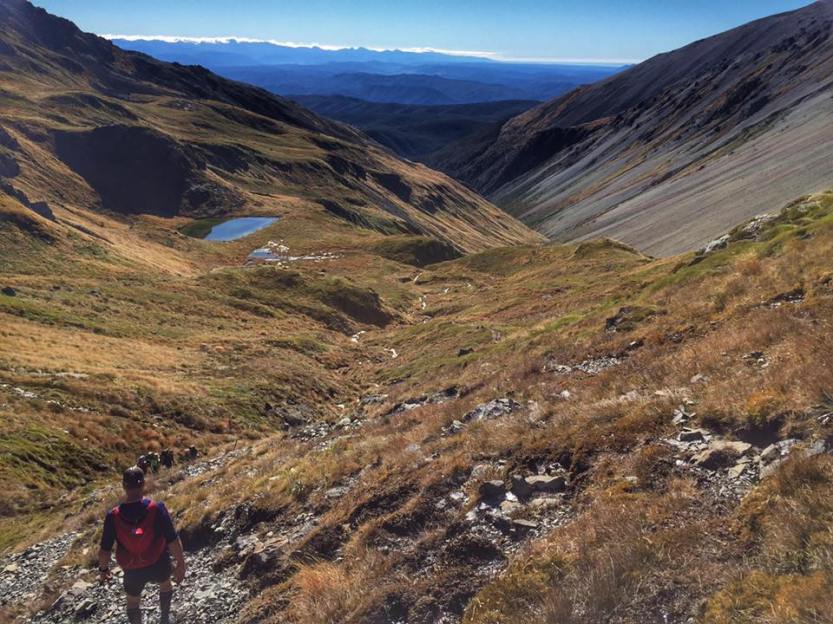 This track was a completely different experience from the rocky ridge above.  After the mud slog, we crossed several rivers and ran gentle rooty tracks through beach forest. I love these goblin type beech forests filled with ferns and moss covered tree trunks. The streams and the shade from the thick canopy kept this portion of the track cool and sheltered from the elements. 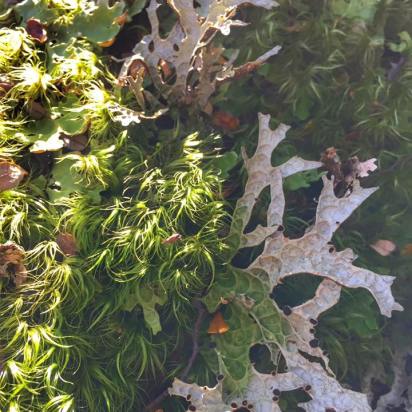 While a 25 km run typically wouldn’t be a super big run for us, the rugged landscape and limited training made for a pretty epic day.  Upon our return to the car park, we celebrated with a finisher beer…Garage Project of course and enjoyed a massively yummy meal at the Alpine Lodge, one of the only restaurants in town.

We had plans to do another trail run the following day, but we were pretty sore, realising just how out of running shape we were. We walked the lake side tracks for bit before heading over the hill to Nelson to look for local pottery and food. We picked up these lovely laksa bowls at Royce McGlashen.  If you are traveling outside of the tourist season, it is worth a call to the potters to see if they are open.  We struck out on many of the others we tried to visit.

We aren’t real big fans of the town of Nelson so we continued driving over the hill in search of lunch. We found a gem of place in Havelock, the Mussel Pot.  This place has fresh green tipped mussels from the local Marlborough Sounds and they are delicious!  It was definitely worth one of the few days I stray from my vegetarian diet.

Having considerable time before our Interislander ferry depared Picton, we squeezed in some wine tasting in the Marlborough Region.  This wine region is Aoteroa, New Zealand’s premier region, producing roughly 77% of the nation’s wine.  If you have picked up a bottle of NZ wine in the States it is likely from here.  We stop here often at the end of our south island trips. While its lovely, I prefer the smaller red wine producing regions. The signature wine here is Sauvignon Blanc. We had limited choices of wineries so late in the day, many of the places close around 4PM.  We settled on our usual lunch stop, Wairau River Winery and Allan Scott Family Winery which boasts a funky courtyard and warm fire.

Another NZ weekend adventure complete!  I can’t wait to return to the Nelson Lakes Region when we can enjoy some snow covered peaks.  Hopefully it won’t take me another two years to make it back.