We spent our last holiday weekend (the Queen’s Birthday) before the long dark ages of winter driving Te Tai Poutini West Coast.  Known by locals as simply ‘the Coast’, this narrow slice of land (55km wide) on Te Wai Pounamu South Island, was recently voted one of the top 10 coastal drives in the world by Lonely Planet. A single 559 km road winds along the coast between Karamea in the north and Jackson Bay in the south, crossing rivers and passing rainforests, glaciers, beaches and dramatic geological features.

It is not easy to reach the West Coast, with access over three passes, Lewis Pass in the north, Arthurs Pass in the center and the Haast Pass in the south or an easier route to Greymouth.  This limited access, coupled with a sparse population, makes the west coast feel remote and empty outside of the tourist season.  Just the way we like it! We began our journey via the Interislander Ferry (Wellington to Picton).  It was a rare warm and calm journey so we spent most of the trip outside enjoying the scenery and sea breezes. Large swells on our return would look and feel nothing this.

We had a long drive over to Hokitika that evening.  This was an odd starting point, most start up near Westport and head south to Haast, making a loop via Central Otago and Canterbury.  However, we were planning an out and back trip that allowed us to remain in the West Coast Region for the entire trip.  We typically campervan these type of excursions, but my partner felt like enjoying a ‘real’ bed so we stayed in several different cabins throughout our trip.  He was doing all of the driving (which was a lot) so I didn’t argue. Besides, I really enjoyed all of the wood stove fires, which were a perfect way to end these early winter evenings.

We woke up early the next morning in search of a good cup of coffee and the iconic Hokitika sign.  No west coast trip is complete without a picture of this sign.  I imagine watching the sunset here would be magical, but the morning light was pretty spectacular as well.

We headed off to the Hokitika Gorge, an easy 10 minute walk across swing bridges over vivid turquoise water, white cliffs, and lush vegetation.  The water is most striking in full sun, but there was still enough light in the morning to expose the color.

Continuing south, we headed to the glaciers for a little hike.  For many years, Fox Glacier was considered to have the best views along the hike, but its rapid retreat make these two hikes fairly comparable now. We chose Franz Josef simply because it was the first one we reached and we were ready for a driving break.

Franz Josef is roughly 12km long, terminating 19km from the Tasman Sea where it forms the Waiho River. The glacier was named after an emperor of Austria who had no connection to the area…typical colonizing nomenclature.  It is known in Māori as Kā Roimata o Hine Hukatere or the tears of Hine Hukatere, a woman who lost here love Wawe here.

The glacial track is a gentle 30ish minute walk past high valley walls filled with cascading waterfalls leading to the terminus of the glacier.  There is a higher track along the northern valley wall with a series of swing bridges that allow you to see the glacier from above. 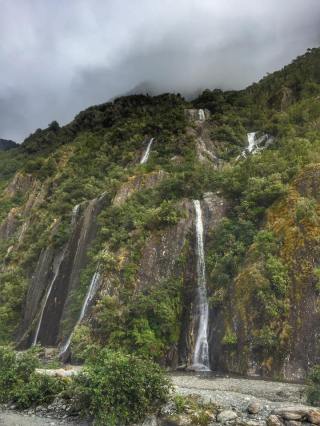 We made a quick stop at Lake Matheson near Fox Glacier.  Here you can see a perfect reflection of the Southern Alps Range.  Unfortunately, for us the clouds were rolling in covering the peaks.  Although this spot is popular with tourists, the views from Gillespie Beach further down the road is arguably more stunning if you are lucky to have a cloudless day.

We continued driving south in search of the Tasman Sea again, stopping at a few beaches along the way.  Our first was Bruce Bay.  The rimu rainforest meets the rocky shoreline of this rugged beach.  I am not sure why, but heaps of people stop here to write on the white quartz rocks.  Just incase this devotion is not enough to convince you of the love for this beach, how about a sign telling you so or the heart shaped rock I found? We certainly did love this stop, but a big reason why were the dolphins we spotted playing in the surf. 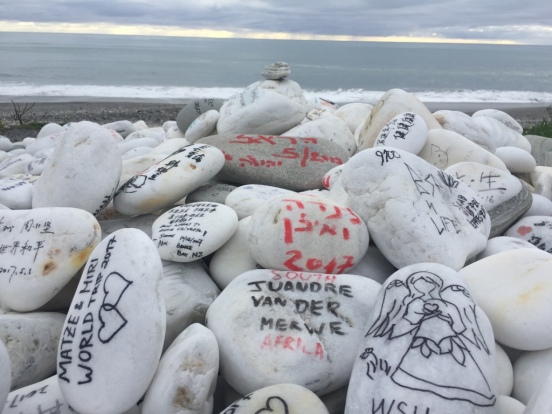 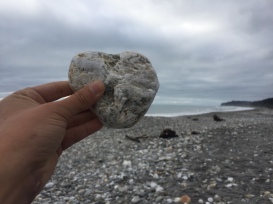 From here, the winding road climbs over forested cliffs extending to the sea, which is visible from Knight’s Lookout.

As the day winded down, we stopped at Ship Creek to watch the sunset. Ancient kahikatea swamp forest runs along the edge of the highway here.  These trees provide a glimpse of what most of the coast looked like prior to human settlement. 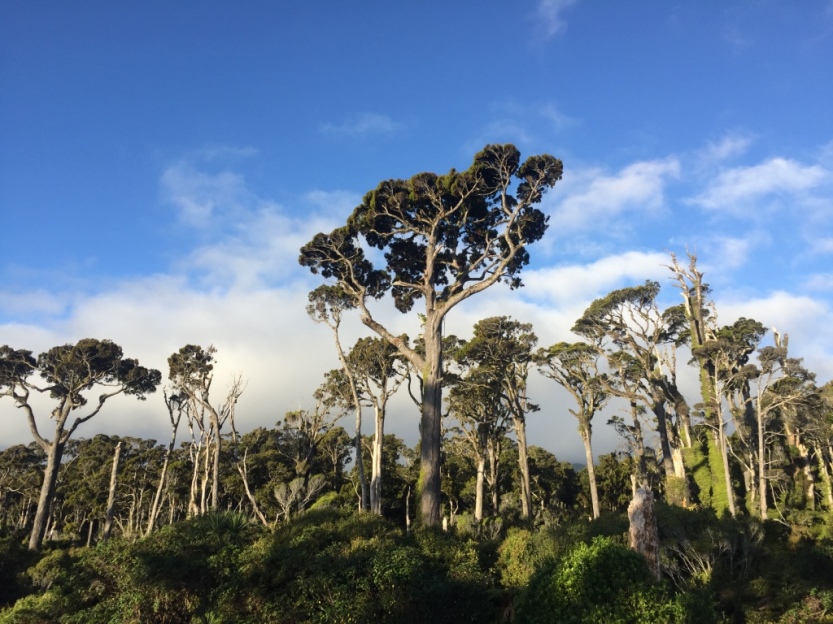 It is an easy walk through the dunes to access Monro Beach.  Here you may be able to spot the yellow eyed Fiordland crested penguin, but if you read some of my other posts we don’t have much luck spotting yellow-eyed penguins.  Besides, they typically arrive here between July and December and it was early June.  Wrong timing again.  We did spot a few Hector dolphins in the surf here.  These little dolphins are only found in NZ waters and are one the smallest dolphin species, growing no more than 1.5m in length.

Despite the cloud cover, we managed to enjoy a lovely sunset here.  We paid respects to our beloved Tigger, our cat who unexpectedly lost his life the week before.  We nearly reached the end of the road at this point and decided to head back rather than continue to Jackson Bay.   The famous restaurant, the Crayfish Pot, was closed for the season and daylight was no more. 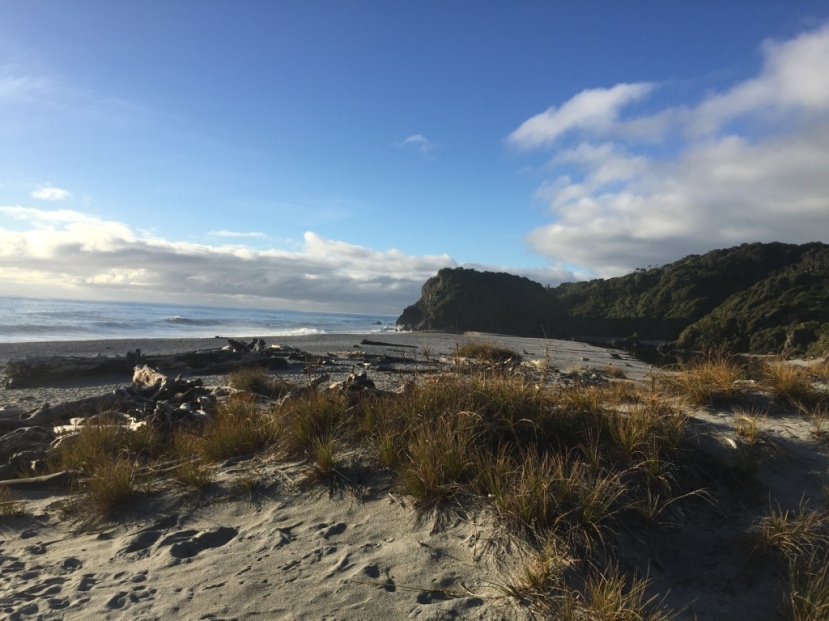 We headed north the next morning.  We made a little stop in Okarito, a tiny little beach community bounded by an estuary, lush forest, and the Tasman Sea.  We hoped to see expansive views of the Southern Alps here, but the clouds were not having it today either.  Instead we drank coffee and watched local fisherman prepare for the day. 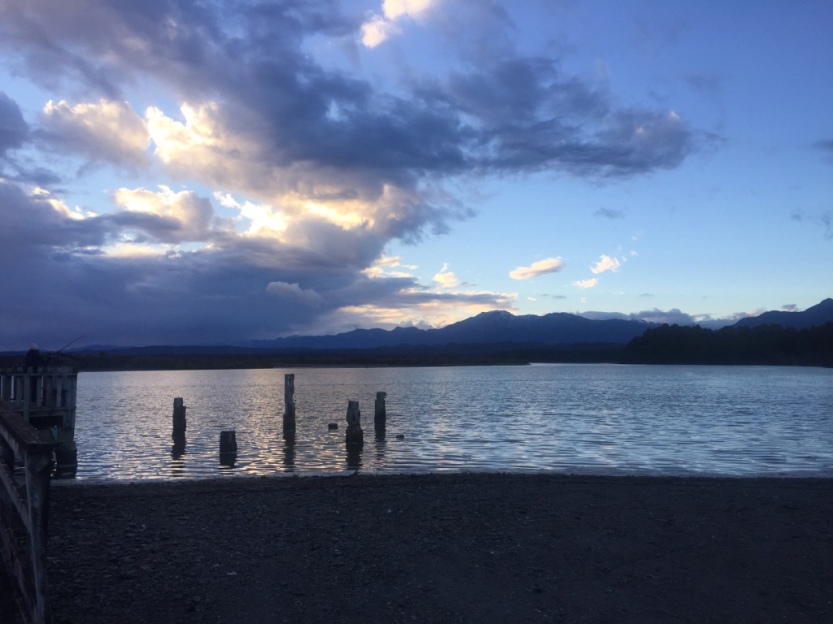 We were traveling to the Punakaiki pancake rocks.  On our way we noticed these interesting rock formations in the sea, just south of Barrytown.  Since the tide was retreating, we searched for a way to access this area, eventually finding a pull off with beach access.  As the tide rolled out, interesting sheets of flat rocks that looked like fins were exposed along the shoreline.  Eventually we reached the rocks we saw from the road above.  I always love walking amongst these giants that are surrounded by water for half of the day.

Afterwords we enjoyed our first visit to the Punakaiki pancake rocks….more on this later as we would make two trips here.  The day ended up being wet and gloomy so we spent the rest of it by the fire with a ‘hottie’ for extra warmth.  Homes in NZ are drafty and rarely have central heating.  People often use(d) hot water bottles known as hotties to keep warm at night. I needed one during the early evening.

Just before sunset the weather cleared and we were greeted with one of the most stunning sunsets I have ever seen.  To our surprise we had rented a cottage at those rock formations we discovered earlier, so we were back again. I cried with joy at the beauty of this night. 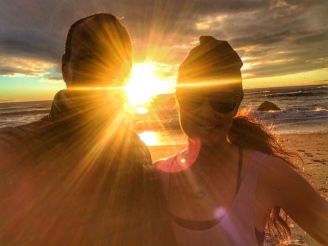 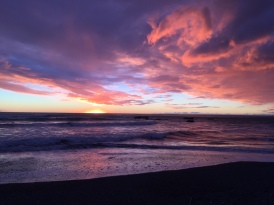 The best time to visit the Punakaiki Pancake Rocks is during high tide, when you see and hear the waves crash violently through the blowholes.  We first arrived the previous day at low tide so we returned again at high tide the next morning.  Unfortunately the sea was calm this morning so we weren’t sprayed by big bursts of water through the blowholes.  It still felt dramatic when the vibrations of the wave rattled the ground below.

These rocks were formed from fragments of dead marine creatures and plants that fell onto the seabed 30 million years ago.  The water pressure caused the fragments to solidify, seismic action lifted them above the sea and acidic rain, the wind and the sea sculpted their form today. 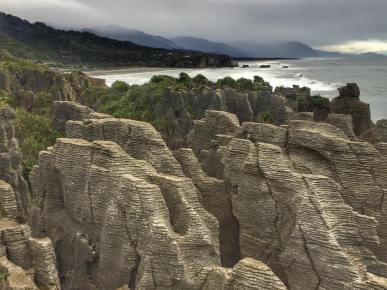 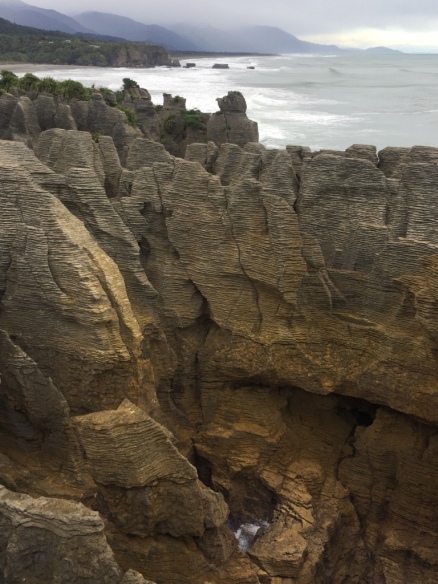 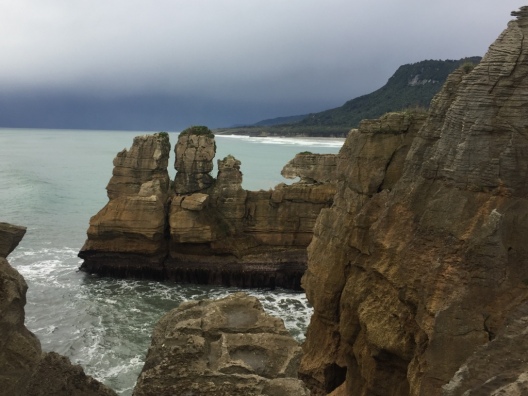 Afterwords we dined on pancakes of course!

Our last mini hike of the trip was through a Podocarp forest to the Punakaiki Cavern, a karst cave of Oligocene limestone. This is a 30 minute walk, with a secret scramble to a remote beach leading you past sea carved walls, through tunnels, and under arching waterfalls dropping from above. 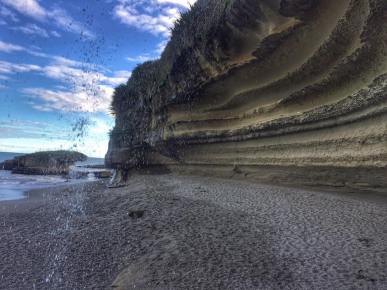 The sun greeted us as we journeyed northward along the coast, heading home via the scenic Lewis Pass near Westport.  Another great mini weekend trip in the books!

Te Tai Poutini West Coast is a magical place of giants, giant trees, giant ice, and giant geology that rise from the sea.  People always say, you haven’t experienced Aotearoa New Zealand unless you have visited this coast….boy are they right.