With 29,000 km of coastline and three harbors, the city of Auckland is known for its beaches. While the city beaches are lovely and convenient, I much prefer the more wild, rugged, black sand beaches along the west coast. The most notable in the area include Whatipu, Karekare, Piha, Te Henga and Muriwai, all remote, yet only an hour’s drive from the city. We managed to check out three of these beaches over our weekend trip.  It took us another two years to reach Te Henga and Muriwai.

We spent most of our weekend in Piha, arguably Auckland’s most popular surf beaches. 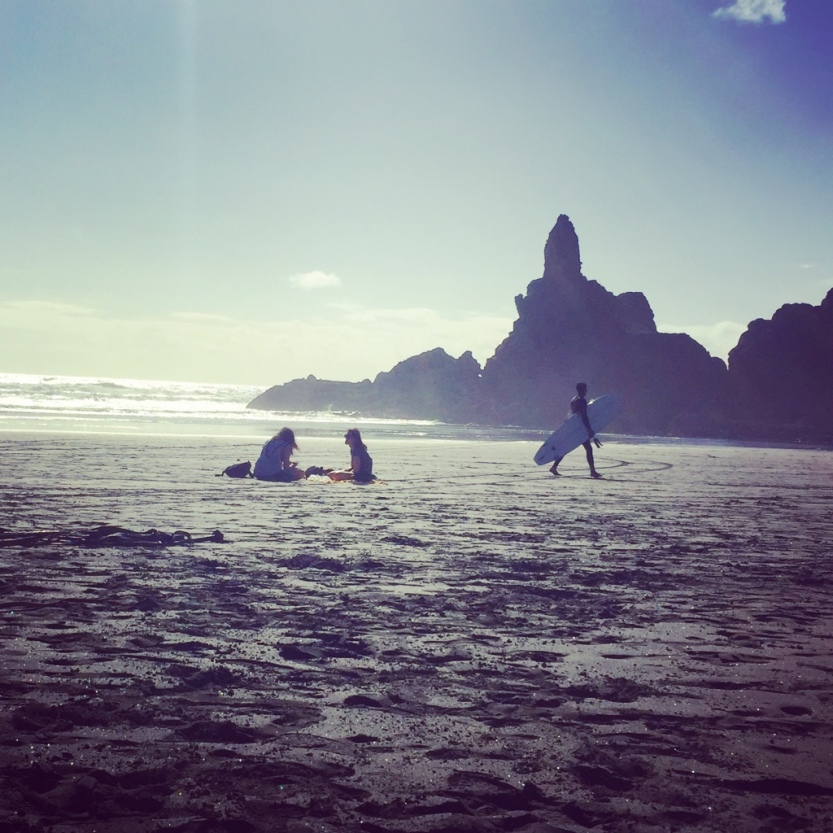 There is a small community that has settled around this beach, so you won’t walk the shores in solidarity.  However, the crowds are far less than the city beaches so its not hard to find a quiet little area to relax. There are nearby shops and cafes providing options to duck away from the intense NZ sun and a general store to stock up on supplies.

Lion Rock is the iconic landmark that separates Piha and Little Piha Beaches. This rock can be climbed with care or simply enjoyed during one of the many lovely west coast sunsets.

There are powerful undertows and rip tides at this beach and flags will indicate where safer, lifeguard patrolled swimmers areas are located.  The Piha Surf Life Saving Club is one of NZ’s best and it has to be because the surf is strong.  When a surf club is sponsored by an insurance company (see the State icon on the flag post below) and has a medical station within the club facility, you can have an appreciation for the danger before even dipping a foot into the sea.

We stayed further inland in Piha, in a tiny treehouse that was nestled in the bush. Although within walking distance to the beach, the treehouse felt secluded within the trees filled with the song of native birds. We loved the outdoor shower and breakfast on the deck.

The treehouse is a short walk to KiteKite Falls, which is a great place to cool off during the humid summer months. No longer accustomed to heat after a year in Welly, the falls was a welcome cool down sanctuary.

Karekare is an isolated beach south of Piha, made famous by the Oscar winning movie, the Piano. While there is vehicle access to this beach, we chose to run along the Hillary Trail from Piha. The Hillary Trail is nearly 95 km of track through the native bush of the Karamatura Valley, along the coastal beaches and cliffsides from Whatipu (south) to Muriwai Beach (north), passing marshlands, waterfalls and sand dunes along the way. There is a splinter track between the coast and Swanson.  The track is home to the famous The Hillary 80 km ultra marathon. 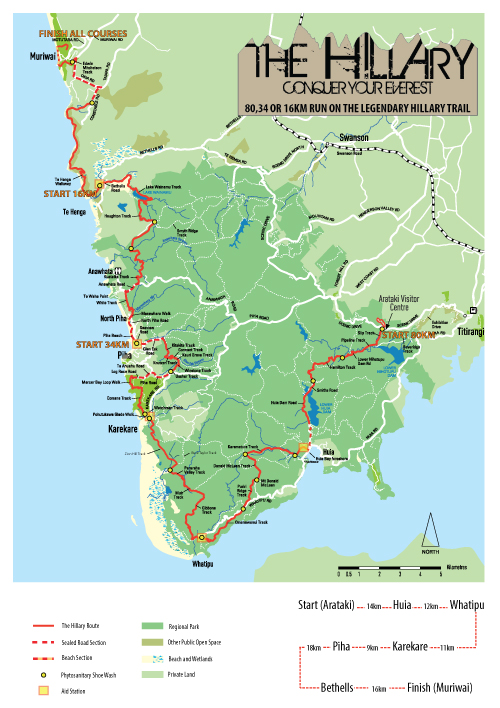 We ran only a portion of the route along the Comans Track between Piha and Karekare. This portion is mainly along the coastal cliffs with beautiful views of both beaches from above.

There is a stunning overlook at Te Ahua Point on Mercer Bay where you will find the statue of Te Ahua o Hinerangi. Hinerangi was the daughter of a Māori chief who lost here husband on the rocks below.  Her life-size figure can be seen, gazing out to the sea in sorrow.  Today the statue symbolizes tangata whenua Te Kawerau a Maki’s spiritual guardianship of one of the oldest settled places in the Waitakere Ranges.

Not far beyond the statue, there is a descent to Karekare beach below.  While the beach was warmer and sunnier that it appeared in the Piano, the movie’s signature mist was skirting along the sand. 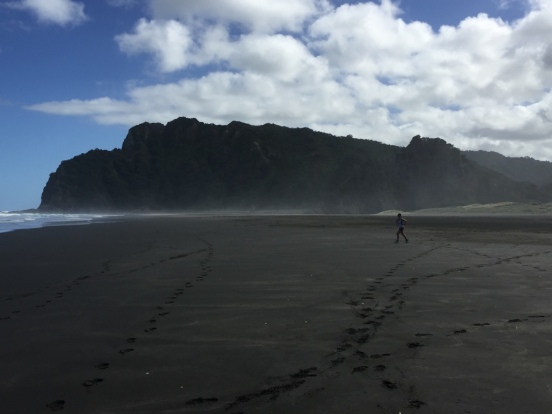 We weren’t in shape enough to include Whatipu Beach in our running loop, so we traveled by car the next day.  This beach sits on the northern edge of the Manukau Harbor.  The beach is rocky and rugged and lined by large sand dunes and driftwood. The powerful currents of the harbor are more attractive to local surfcasters rather than swimmers.  This is a great place to explore for hours, discovering tiny coves that are revealed at low tide, walking the empty flat beach, and climbing the hills above for sweeping views of the Tasman and cliffs lining the harbor. This was remote conclusion was the perfect end of our Western Auckland Beach experience. 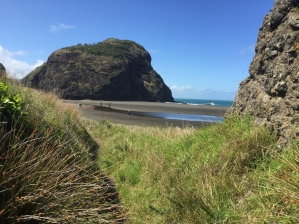 Te Henga is the Māori word for sand and there is certainly a lot of it here creating the expansive beach and towering sand dunes that have been accumulating over the past 4500 years.  There is so much to discover at Te Henga, a large arched cave in the cliff face can be found on the southern end of the beach and a high tide island and cliff face walk along the northern reaches. You can find everything in between, swimmers, dog walkers, and apparently motorcycles. 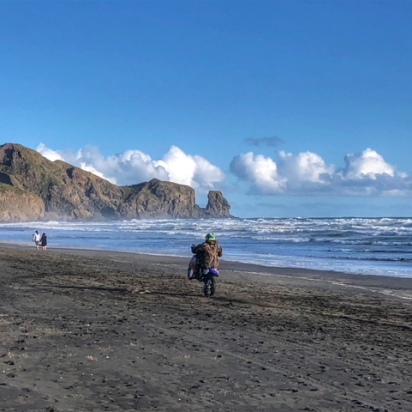 No trip to the west coast is complete without catching a sunset. Te Henga is just remote enough to keep many away, providing a quieter environment to the busier Piha.  Known for its scenic beauty, this beach was the perfect backdrop for wedding photos that evening. 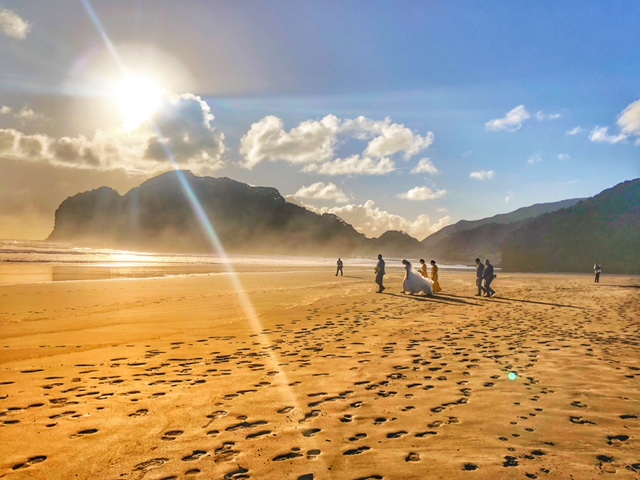 High above Te Henga is a coastal walkway connecting to Muriwai Beach.  This 21 km roundtrip trail is leg 4 of the Hillary Track and one of the few longer trails you can still access do to the rāhui put in place to protect kauri trees throughout most of the Waitakere Ranges.  A rāhui is a prohibition against an area to protect a natural resource.  This track offers far reaching views of the wild west coast. 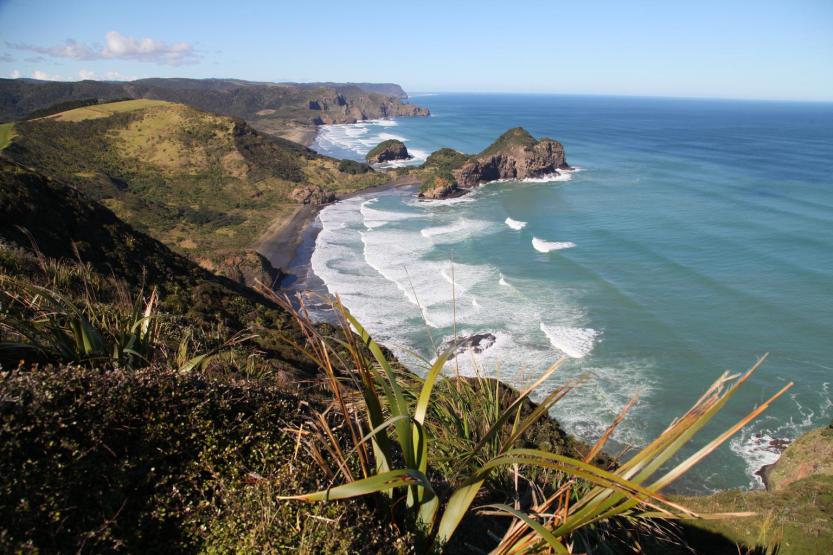 The best time to visit Muriwai is from August to March when 1200 pairs of gannets nest on the islands and coastline.  I had been wanting to see these beautiful birds for years, but never synced my trips here or at Cape Kidnappers (another area to see a large colony) with their stay.  We spent hours watching these birds vie for a nesting site, smooching their partner, and darting into the water with precision to retrieve fish.  These birds are highly successful hunters and lovers, often mating for life. 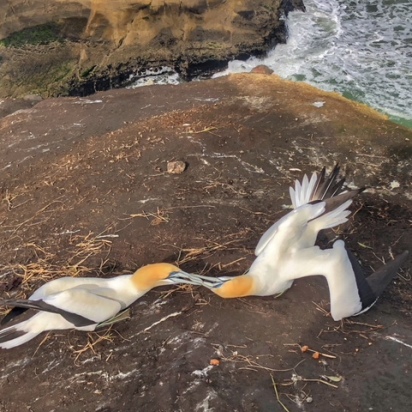 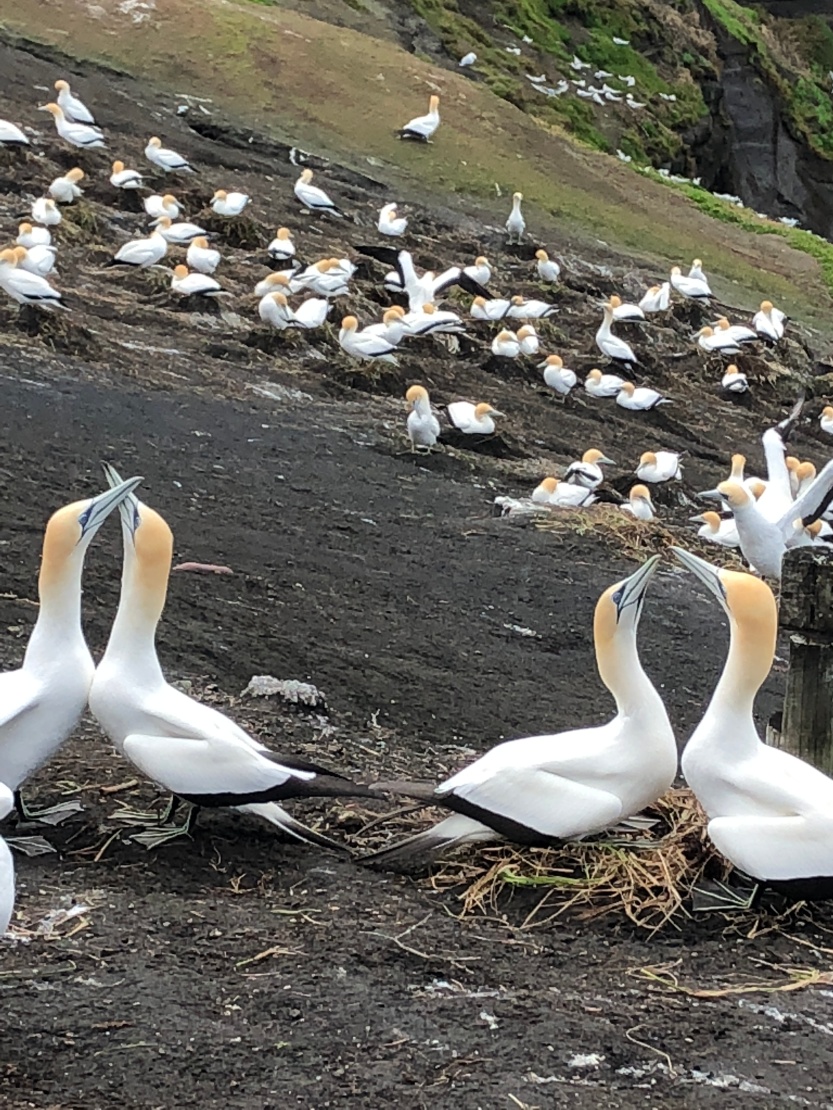 If you are looking for a place to in this area, I highly recommend the Canopy Campers site, Wharerangi Forest.  Here you will find a collection of tiny cottages and vintage campers, short bush tracks, and views to the Auckland City Centre.